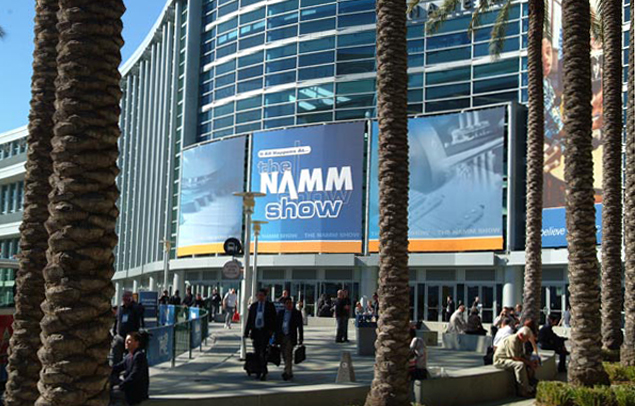 And the breakfast was pretty darn good this year – biscuits and gravy, bacon and scrambled eggs, taters, sweet rolls and croissants, fruits, orange juice and strong coffee. The best part of the morning was the stellar playing of the Kruger Brothers. I had no idea that a banjo could do that – Jens Kruger plays it like a Stradivarius. The Brothers (Jens, Uwe and Joel Landsberg) were respected with a standing ovation at the end of their set.

Also during the breakfast session, NAMM presented its Wanna Play? Award to eight companies from outside of the music products industry, which use music products in their television ads, helping to inspire people to make music.

The recipients of the 2011 Wanna Play? Awards are:

Mark Hriciga, vice president of advertising and user experience at Experian Consumer Direct, was at the presentation to accept the award on behalf of freecreditscore.com and its TV ad called “Credit Fail.” And singer, songwriter and guitarist Chelsea Williams was also at the presentation to accept the Wanna Play? award on behalf of Chevy for its “Shine” TV ad, in which she appeared.