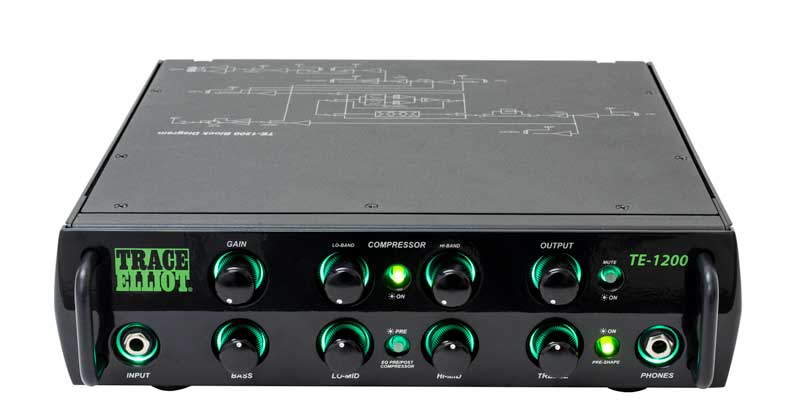 Trace Elliot® enters a new period of innovation with the all-new TE-1200 bass amp head. Representing the brand’s first big product release of the new decade, the TE-1200 delivers 1200 Watts of bone-rattling true RMS power, 4-band equalization, the brand’s distinctive “Pre Shape 1” switch with included footswitch, and all the inputs/outputs modern bass players require. Whether players are on the biggest stages of the world, in the studio, or practicing from the comfort of home, the TE-1200 offers a multitude of helpful features that achieve excellent bass tone and, even more importantly, help to preserve it.

On the front panel of the TE-1200, players will find input gain and output level controls as well as lo-band and hi-band compressors. The audio signal is divided into two bands, each with a separate compressor and adjustable threshold. A separate switch activates the compressor functions for both low and high bands. The function, which illuminates when active, is also available on the footswitch. Directly below is the EQ pre/post compressor switch, which is set to a default position before equalization. When the switch is pressed, the compressor is moved to a point after equalization, and the switch illuminates.

Active controls on the TE-1200 adjust four separate equalization bands — bass, low mid, high mid, and treble — to customize the tone, and the footswitchable pre-shape introduces the distinctive Trace Elliot “Pre Shape 1” curve into the signal path. These controls are located next to the preamp input, which has a high impedance to allow for wide frequency response and dynamic range without loading the source. A quarter-inch headphone output allows for silent practice.

With its compact, 12-inch square footprint, and light weight of 11.5 pounds, the TE-1200 is a feature-loaded, highly portable bass amp head from the original bass amplification specialists. A padded gig bag and optional 1.5U rack mount kit are included.

Learn more about the Trace Elliot TE-1200 and get a closer look at www.traceelliot.com.