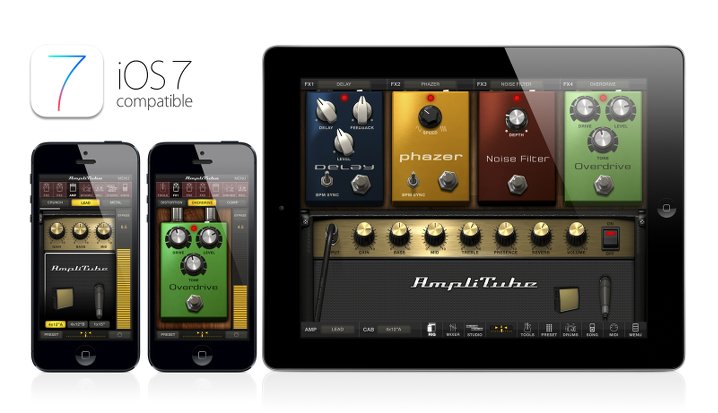 IK Multimedia, the pioneer and global leader in music-creation software, mobile apps and music-making hardware for musicians, engineers and producers, is pleased to announce a new version of AmpliTube for iPhone, iPad and iPod touch, the full-featured guitar studio and recording app for mobile musicians, which adds iOS 7 compatibility as well as the ability to use AmpliTube as a filter app in the new iOS 7 “Inter-App Audio” feature.

The new version of AmpliTube (version 3.1) is fully compatible with iOS 7, the new operating system for iPhone, iPad and iPod touch, which means you can create music on the go with the latest mobile functions and features available, including the new Inter-App Audio routing feature.

Inter-App audio allows audio apps to communicate with each other and stream the audio output from one app to another. This feature is extremely handy for adding effects, and processing the audio stream from one app and sending it to another. AmpliTube can be used as a “filter” app in iOS 7 for processing the audio from other apps, allowing musicians to use all of the stompbox and amplifier effects with any live (real-time) or recorded material. This feature is similar to AudioBus functionality, but provides the opportunity for more complex routing. AmpliTube is fully AudioBus compatible as well, making it the most flexible audio-processing and recording app for iPhone, iPad and iPod touch.

AmpliTube for iPhone, iPad and iPod touch is a full-featured and expandable playing-and-recording studio for guitarists and bass players, vocalists and producers/engineers. It features a complete instrument signal chain, including stompbox effects, amplifier head, cabinet section and microphone, just like a traditional guitar or bass stage rig.

It also features a recording studio, and multi-track-DAW editing-and-sequencing tools. AmpliTube is also expandable with collections of gear from the world’s top manufacturers like Ampeg® and Fender®, and from artists like Jimi Hendrix™ and Slash. Now musicians can capture their ideas and performances on the go on their iPhone, iPad and iPod touch, with a comprehensive suite of creative tools, all from the leader in mobile music-creation apps and accessories.

Plug in and Play with Lightning-Compatible Accessories

AmpliTube is the perfect companion app for IK Lightning-compatible accessories such as the new iRig PRO universal audio/MIDI interface, and the iRig HD audio interface. For the complete lineup of mobile accessories, please visit the IK Multimedia web site, www.ikmultimedia.com/ios.

The latest AmpliTube update for iOS is free for existing AmpliTube iOS users. AmpliTube is available on the App StoreSM (www.AppStore.com) for iPhone and iPad for only $19.99/€17.99. A free version is also available. AmpliTube effects and functions can be expanded via in-app purchase with gear from Ampeg®, Fender®, Soldano®, Slash and Jimi Hendrix™, and a complete multi-track recording studio with drummer and DAW-editing features.