Use authentic Fender amp-and-effects sounds along with your favorite compatible audio apps, and get full support for iPhone 5 graphics

IK Multimedia – the leader in mobile music apps and accessories – today announced the release of AmpliTube Fender™ 1.5, a multi-FX app available for iPhone, iPad and iPod touch.  The update adds Audiobus compatibility, and the iPhone/iPod touch version features an enhanced user interface that fully supports the larger displays included in the latest versions of those devices. AmpliTube Fender, IK Multimedia’s guitar/bass amp-and-FX app, is the only officially certified Fender amp-and-effects models for iPhone, iPad, and iPod touch. A version for Mac/PC is also available. 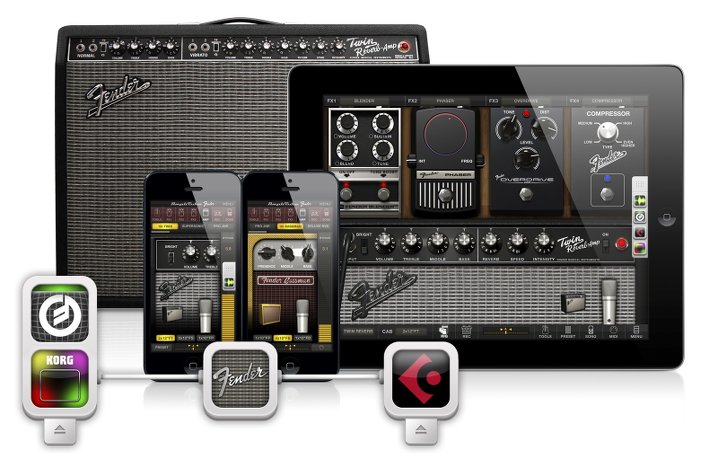 AmpliTube Fender, with its amp & FX models and built-in recorder, can be used in any of the 3 Audiobus “slots”: Input, Effects, and Output. The Audiobus App (from Audiobus Pty Ltd, requires a separate purchase) makes it possible for audio Apps to connect together in real-time, which greatly adds to the creative potential of music making on the iPhone, iPad and iPod touch.

When used in the Audiobus Input slot, AmpliTube Fender’s amp, stompbox, cabinet and microphone models allow users to input guitar or bass sounds with authentic and ultra-realistic Fender tone. In the Effects slot, those same effects can be used to process the sound from the app (or apps) in the Input position.

AmpliTube Fender’s processing and recorder can also be used in the Output slot. With the multi-track option added (via in-app purchase), the iPhone/iPod touch version of the app features a 4-track recorder and the iPad version features an 8-track recorder. Both multi-track upgrades include master effects, as well.

AmpliTube Fender 1.5 includes support for the larger screen in the iPhone 5 and new iPod touch, with an enhanced GUI designed to take advantage of that extra real estate.

IK also added it’s Global Menu to AmpliTube Fender. Standard on all new and updated IK apps, the Global Menu consolidates many utility functions such as Settings, User Account, Help and more, all under one convenient menu, making it faster and easier to find such items.

IK’s AutoFreeze function, which was included in the recent AmpliTube 3.0 update, is now available in the multi-track recorder in AmpliTube Fender. Once effects have been applied on a track, it automatically “freezes” the track with the effects, freeing up the processing to be used on a different track, but retaining the effects sound on the original track. The tracks automatically unfreeze when selected, allowing to go back and tweak the effects at any point, thus making AmpliTube Fender much more powerful as a mixing platform.

IK also added a pre-roll option to the recorder. When activated, two measures of count-off are played before the recording starts, making it easier to come in at the right tempo.

IK Multimedia developed AmpliTube Fender in cooperation with Fender, who provided guidance, testing, and advice to help make the app as accurate and true to the Fender brand as possible.

Both the iPhone and iPad apps offer Fender amplifier, cabinet and stompbox models, including such acclaimed amps as the ’59 Bassman®, the ’65 Fender Twin Reverb®, the ’65 Deluxe Reverb® and more. Effects include the Fender Blender™ distortion pedal, as well as the Fender Compressor, Phaser, Tape Echo, Overdrive and Noise Filter pedals. Many useful and varied presets are included, or you can setup your own rigs, mixing and matching the gear to create your own custom Fender sound.

IK offers a variety of input options for connecting an instrument to a device running AmpliTube Fender (or other mobile audio apps), including iRig HD, the new high-definition audio interface, which also works with Macs; iRig STOMP, the first stompbox style audio interface; and the original iRig, the most popular mobile guitar interface of all time.

AmpliTube Fender is available from the App StoreSM in both iPhone/iPod touch and iPad versions for $14.99/€13.99, or at www.AppStore.com. The new version is a free upgrade for existing users.

Free versions of AmpliTube Fender are also available for iPhone/iPod touch and iPad, containing the identical functionality of the paid apps, but with a limited model set. Users can add the other Fender models via in-app purchase.

For more information on AmpliTube Fender: