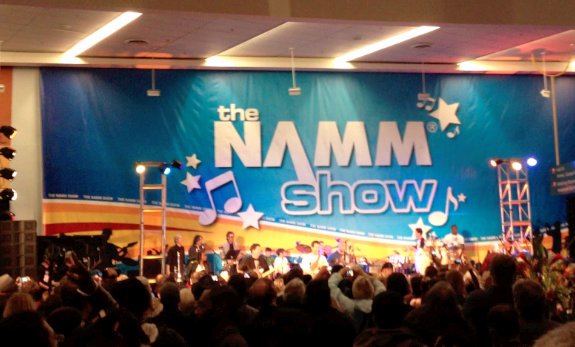 Live Concerts at the NAMM Show. The Band From TV.

The Band From TV is dedicated to supporting charities worldwide.

It’s been a very long fun week at the NAMM show, with 4 big bags of media info, walking/standing/talking all day for 4 days. I just wanted to go home, but the band sounded really good, I was amazed to see Actors on the stage, singing, playing instruments, and sounding really great. So I decided to  use the very last energy from my i-phone. I hope you enjoyed it as much as I did.

About the band: The Band from TV’s goal is to provide funding and resources for several incredibly worth while charities around the world. The list of organizations they support may change but they have one common goal; to raise money through music to help those in need. Finding a cure, helping children around the world, protecting our environment, providing educational materials or musical instruments, aiding in natural disasters, or standing up against domestic violence.

What started out as a love for music and simply having fun jamming with buddies has led Greg Grunberg and his friends to an unusual place: packed venues playing rock and roll for charitable causes! The Band From TV lineup includes a powerhouse of well-known and acclaimed actors including: Greg Grunberg (drums), a veteran of shows such as “Alias” and “Felicity” as well as the NBC hit “Heroes”; James Denton (guitar), currently starring in the ABC hit “Desperate Housewives”; Bob Guiney (vocals), who appeared on “The Bachelor” and on TLC’s “Date My House”; Jesse Spencer (violin) currently starring in the FOX hit “House”; Adrian Pasdar, from “Heroes” and “Desperate Housewives”; Scott Grimes from “American Dad” and “ER,” and rounding out the band are accomplished musicians Chris Kelley (Music Director), Barry Sarna (Eagles), David Leach (Ben Harper), Chris Mostert (Eagles) and child-star turned bass player Brad Savage.

Playing at one of the largest music products trade shows in the world hosted by the National Association of Music Merchants (NAMM), the concert was opened to every NAMM show attendees in front of the Anaheim Convention Center, a crowd of 90,000.

Go to their site and learn more about Actors/Musicians/Singers. www.bandfromtv.com.