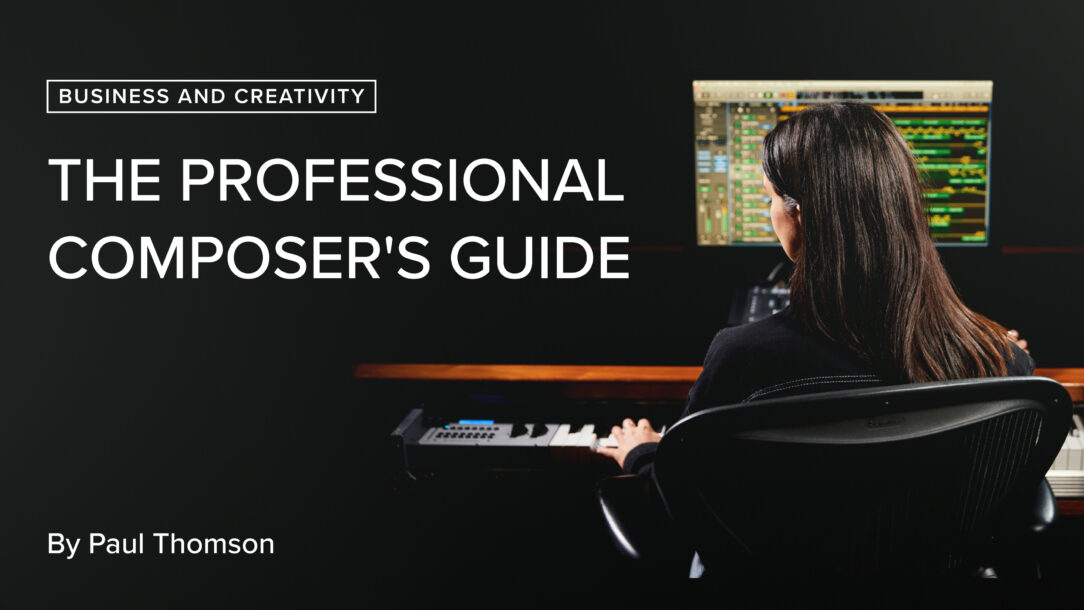 a must-read eBook via the Issuu self-service content creation and distribution platform — pitched as a comprehensive guide to business and creativity aimed at composers of any age at any stage of their composing journey, itself a lengthy labour of love that the multi-talented author originally began back in 2006 before being promptly shelved (as his own creative career tangentially took off in a different direction that originally saw Spitfire Audio providing exclusive composing tools for A-list composers, eventually experiencing exponential growth to become today’s market leader in soundware with a global following), with writing finally resuming in 2021 after a global pandemic helped the tome to eventually emerge blinking into the light — as of May 17…

Who better to write some wise words outlining THE PROFESSIONAL COMPOSER’S GUIDE’s gestation and raison d’être than its author, award-winning media composer and Spitfire Audio co-founder Paul Thomson — truly no stranger to the wonderful world of music-to-picture scoring himself as an English composer for film, television, and video games, as well as a music technologist to boot: “When I was studying music back in the early 1990s, there was no public internet, and very few books about film or television scoring. I would have loved a no-nonsense book that explained in a concise and clear style how to go about the business of being a professional composer. So in 2006 I sat down to write it. I got as far as a general plan and outline of the contents — then life and composing intervened. Over the past year, I returned to this project and started to write about this labour of love, imagining that I was writing to my younger self.”

Saying that, then, the 244-page tome that is THE PROFESSIONAL COMPOSER’S GUIDE looks at both the business and creativity of composing music. As an informative and engaging eBook, it is split into two sections; the first half (PART A: BUSINESS) explores elements of the music business (Chapter 1: An overview of the opportunities available through to Chapter 8: Registrations and royalties), while the second (PART B: CREATIVITY) covers creativity, including strategies to develop the craft of composing and producing music (Chapter 9: Creativity in composition through to Chapter 15: Down time and how to use it effectively). Wonderfully written, this comprehensive eBook is ideal for anyone who is interested in becoming a professional composer, or anyone who would like to refine or develop their technical and creative skills when writing music. Moreover, exclusive tips from Paul Thomson’s creative colleagues out on the frontline of media composition are interwoven thoughtfully throughout to lend credence to the author’s wise words, which themselves take in important advice proffered professionally from the recording engineer and orchestral contractor perspective.

Put it this way: while writing THE PROFESSIONAL COMPOSER’S GUIDE from the heart, the perfectly positioned Paul Thomson could creatively draw from a deep well of proven professionalism dating back to childhood piano playing, starting his musical training at an early age and touring the world as a chorister in Worcester Cathedral Choir; while still at school he achieved the highest grades of the Associated Board of the Royal Schools of Music in four instruments, including Grade 8 in the piano with distinction at the tender age of 11, quickly followed by further ‘8s’ in organ, clarinet, and singing, subsequently creating his first theatrical score for a piece by acclaimed French playwright Henri Ghéon, and writing the official fanfare for the 900th anniversary of the granting of Worcester’s Royal Charter. Continued studies with Dr Donald Hunt OBE (Officer of the Order of the British Empire), former Organist and Director of Music at Worcester Cathedral and authority on the music and life of Sir Edward Elgar; Dr Wyndham Thomas at Bristol University; and Professor Stephen Deutsch at Bournemouth University ultimately led Paul Thomson to achieving an MA (Master of Arts) graduate-level degree in Music. Making a move thereafter to London, he quickly established himself as a versatile composer and producer, working with most major and large independent record labels for whom he has produced albums for a number of artists.

As a commissioned composer, Paul Thomson has created music for feature films, including the multi-award-winning independent movie Love, Sex, and Missed Connections (2012) and the Slate Films/BFI production Half of a Yellow Sun (2013). He has also scored the BAFTA-winning BBC Drama — coproduction with BBC America — television mini series The Fades (2011), for which he won the RTS Award for Best Original Theme Music; the BBC One Drama television mini series The Interceptor (2015); The Marvellous World of Roald Dahl television movie for BBC Scotland (2016); Ways to Save the Planet — an episode from Discovery: Project Earth (2008), itself billed as being the most expensive production ever undertaken by Discovery Networks in association with Bank of America; and the acclaimed RDF documentary The Genius of Charles Darwin (2008). Even earlier, Paul Thomson was busy composing for six series of the popular ITV television drama Where the Heart Is (2000-2005). It is fair to say that there is huge demand for Paul Thomson’s music, making itself heard in so many top-rated television shows — spanning chat shows (Alan Carr: Chatty Man), gameshows (America’s Got Talent; Britain’s Got Talent; I’m a Celebrity, Get Me Out of Here!; The X Factor), and reality TV (Keeping up with The Kardashians; Snoop Dogg’s Father Hood; The Apprentice/Celebrity Apprentice, in which Paul Thomson himself appeared as the composer for the advertising task several times).

He has also composed and produced for Extreme Music, a production music arm of Sony Music Publishing that creates and licenses music for use in television, film, advertising, and online media, starting with a number of albums’ worth of content for Hollywood high-flyer Hans Zimmer’s Director’s Cuts collaboration, creating his own label later under the now-familiar name of Spitfire Audio (also through Extreme Music). Moving into video games, Paul Thomson has worked extensively with British developer Media Molecule and owners Sony Computer Entertainment in Europe and the USA as lead composer on the LittleBigPlanet franchise.

It is only fitting, therefore, that the genuinely heartfelt closing commentary concerning his achievements ably aiding authorship of THE PROFESSIONAL COMPOSER’S GUIDE should surely come from the markedly multi-talented man himself: “The act of creativity has many benefits, and composing can enrich your life in so many ways; at Spitfire Audio, our mission is to inspire a generation of composers, so I really hope that this book will help you towards that goal.”

Spitfire Audio Books — an imprint of Spitfire Audio Holdings Limited (‘Spitfire Audio’) — is also offering a 50% educational discount on THE PROFESSIONAL COMPOSER’S GUIDE eBook, details of which can be found on its dedicated webpage here: https://www.spitfireaudio.com/the-professional-composers-guide/

Watch Spitfire Audio’s premiere of THE PROFESSIONAL COMPOSER’S GUIDE — including its must-see interview with author Paul Thomson, providing further insight as to what is in the eBook itself as well as himself — here: https://youtu.be/4vEGOSbsOHk