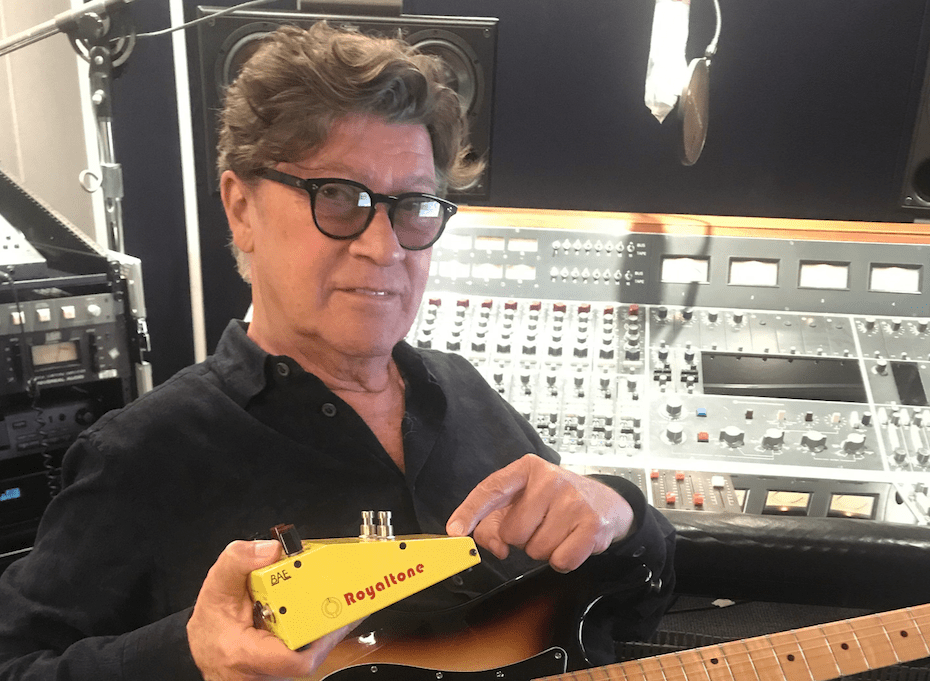 Robbie Robertson’s new release Sinematic is less of an album and more like a film, inasmuch as how the narrative and stories are conveyed. Throughout the entire body of work, Robertson is scriptwriter and director — building his stories around a myriad of colorful tones and sonic textures that unfold over the course of each track. While making the album, Robertson reached for what he affectionately refers to as his ‘black box’ — a BAE Audio Royaltone stompbox.

Royaltone is an unorthodox fuzz box that delivers authentic English fuzz tones — in stark contrast to the hordes of cheesy, thin sounding fuzz boxes that have infiltrated the market. Royaltone harkens a lost era of ’70s inspired fuzz tones, all captured in a rugged stompbox built to inspire new ideas and sonic textures.

“When I found the Royaltone, it seemed like it was part of a family of organic sounds,” says Robertson. “And most of these distortion pedals I find pretty boring, really. I like a real distortion where the speaker is crying out of the amplifier. For me, the Royaltone was like ‘Whoa!  This is part of a sonic experience that fit right in, and not going to an ordinary place.”

A cauldron of sonic texture
For Robertson, it is all about the journey — both in his storytelling and in his guitar playing. “For my guitar work on this record, I didn’t want any ‘acrobatics’. Anything remotely acrobatic, I got rid of. In my playing on this record, I was really trying to find the poetry, and relay a sonic experience that was telling a story. For me, sometimes a song is able to come out of a sonic experience. It isn’t necessarily just chord changes, a beat or a lyric. It can be a sound, and I just think, ‘I want to follow that. I want to go deeper into that place.’ And sometimes, with the help of technology, it can be like stirring up a potion.”

Robertson employed a kind of ‘workshop attitude’ in composing and recording Sinematic, working alongside many first-rate musicians. The first song on the album, “I Hear You Paint Houses”, features a duet with Van Morrison. On the track that follows, “Once Were Brothers”, Robertson collaborates with Citizen Cope and J.S. Ondara on vocals, as he relays a heartfelt homage to the brotherhood he felt as a member of The Band. Other incredible musicians on Sinematic include Pino Palladino on bass and Chris Dave on drums. Of the collaborative nature of the album, Robertson says, “this mixture of things and people that I cast in these parts for these little movies I’m making — some people call them songs — are all approached as a cinematic experience and executed in a workshop format.”

Royaltone: A tone fit for Robbie Robertson
Launched last year at Musikmesse in Frankfurt last year, Royaltone is the most recent offering in the growing BAE Audio family of guitar pedals. The pedal — which contains two distinct switches to engage either the fuzz or tone circuits — imparts an instantly recognizable buzzy grit that cuts right through even the densest mix. With the tone switch engaged, users can access and adjust a full frequency range with dedicated knobs for bass, mid and treble. Meantime, the fuzz circuit knobs consist of attack and level, enabling users to dial in exactly the right amount of boost and compression. Used in combination, the tone and fuzz controls on Royaltone are able to produce a truly diverse palette of tonal ranges and colors.

According to Robertson, the journey in attaining an ideal sonic tone is partly a mystery.  “To me, the Royaltone doesn’t sound like any of the other pedals,” he says. “It’s almost like a mysterious ‘black box,’ you know what I mean? You just don’t know what’s inside. There is something that damn box that is doing something that I don’t understand — and I don’t want to understand. I just want to experience it.”

About BAE Audio
BAE Audio is a U.S.-based manufacturer of high-end microphone preamp and equalizers, all of which are faithful to vintage designs of the seventies and before. The company is committed to the vintage philosophy of hand wiring and hand soldering all of its components to achieve a high quality and authentically vintage sound. For more information on BAE Audio, please visit our website at www.baeaudio.com.