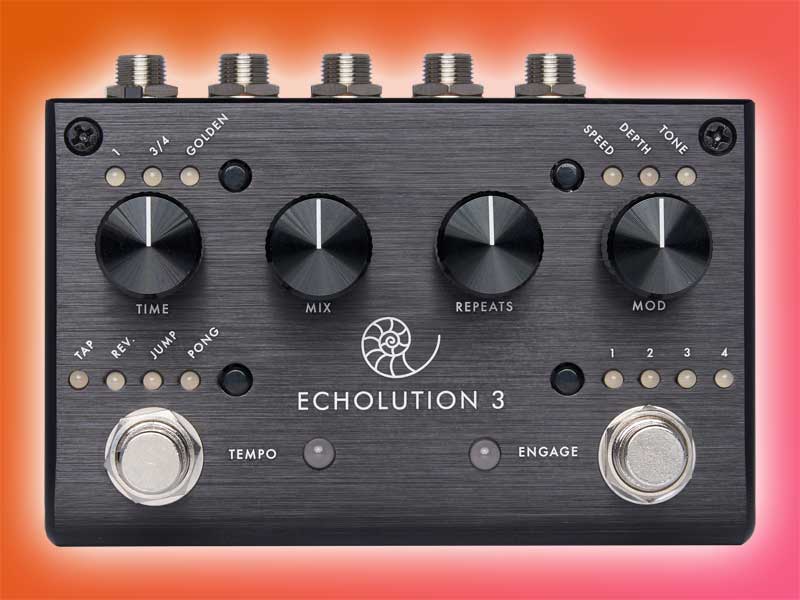 Pigtronix is proud to announce the launch of Echolution 3. Following the success of its sought-after predecessors, Echolution and Echolution 2, the all-new Echolution 3 offers a streamlined user interface, remarkably hi-fidelity audio, and more selective sound design options than ever before.

Echolution 3 is a multi-tap stereo modulation delay offering a myriad of sound design options including reverse, jump, pong, modulation tempo sync, variable low pass filter, flexible signal routing and comprehensive MIDI control. Delay times ranging from 100ms to 5 seconds can be dialed in using the Time knob or via Tap Tempo using the left footswitch. A second delay tap can be set to the same length or a fraction of the main delay time to create rhythmic echoes. The ¾ fraction creates a dotted eight note delay, while the Golden fraction uses the sacred geometry of the Golden Ratio (.382) as the multiplier for the second tap. The multi-tap settings can be even further enhanced by the stereo ping pong effect, which causes the different delay taps to switch sides on each repeat. Store up to 4 presets, unlock hidden features with the Universal Remote footswitch, and design yet unheard delay lines. Runs on standard 9VDC.

Time: Sets the length of the delay line. Overrides tap tempo and vice versa. Select sub-divisions with the small push button. Can activate any two sub-divisions at once.

Mix: Sets the volume level of the delay signal.

Repeats: Sets the amount of regeneration in the delay line.

Preset Select: Push to toggle through presets, press and hold to select. To save a preset after making changes, press and hold. Presets can be toggled and selected using only footswitches (see manual).