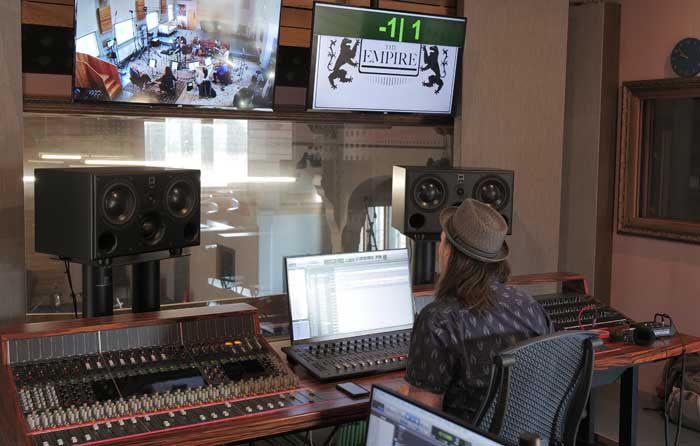 Bassist turned Scoring Mixer Rich Aitken has been one of the industry’s most respected sound production professionals for nearly 25 years. Having spent time as a bass player in a drum and bass crossover/electro-rock band in the mid-1990s, Aitken turned his love of music and audio into a world-class business, Nimrod Sound, which he initially started as a mix-house for video games. Today, whether at home or on the road at studios like Abbey Road and The Empire, Aitken manages a wide array of recordings, works with composers and provides sonically engaging mixes to bring out the best in a musical piece for TV, film or gaming. No matter the project, or studio, Aitken relies on NUGEN Audio to deliver the ultimate sound experience, with elegant, astounding mixes, every time.

With more than 600 projects from clients that span the world, Aitken’s credits include dramatic films and TV series for Netflix and the BBC, as well as for soap operas and commercials. Some of his most recent notable work includes I Care a Lot, a Netflix original J. Blakeson film; Queen Sono, a Netflix crime drama; and the BBC’s Casualty and Silent Witness TV series. Earlier work includes the BAFTA-nominated Reservoir Dogs and 24: The Game, based on the popular television series, 24.

For Aitken, NUGEN’s audio tools are the top choice for mixing projects. He first stumbled upon the brand after a frustrating search for proper loudness tools to utilize on his Discovery Network projects. This hunt proved especially beneficial for his work on the SingStar video game.

“At the time, I was remixing commercial recordings for the game to ensure they worked a certain way, and there was a particular loudness target I had to meet,” he says. “I needed some accurate tools and standard loudness solutions weren’t working, so I decided to try NUGEN’s VisLM meter in that application. I was very happy with the results.”

Today, Aitken says he uses NUGEN’s VisLM everywhere and relies on it to ensure consistency. “I use it while mastering commercial film soundtracks, to keep an eye on where I am,” he says. “I tend not to master to a specific standard, I just go for what sounds right, but it’s nice to know where I am. If I suddenly see something like an orchestral piece is persistently up at minus nine, I know that I’m probably doing something wrong.”

Aitken generally prefers to deliver his music projects at the right level for the film, TV or gaming project he is working on to ensure consistency when the music is combined with dialogue and sound effects. “Once I’ve gotten a piece to where I feel it’s best creatively, I don’t want clients to push the sound up and down a lot to meet their dialogue and SFX marks,” he says. “I don’t mind the mood of the sound ducking a little bit, because sometimes there’s a bit of dialogue that needs to be heard, but I hold myself responsible for having the music at the level I think it should be in the film. I want to please the composers and make sure that my directors get what they need as well.”

Now a longtime fan of the brand, Aitken most recently jumped at the opportunity to try NUGEN’s new 3D convolution reverb plug-in, Paragon. The plug-in has proven to be a welcome addition to Aitken’s audio arsenal, and he uses it for musical scores as well as for dubbing over TV and film projects.

“Dubs have a specific kind of neutral and natural sounding need that isn’t necessarily very overt and splashy,” he explains. “In those cases, we’re often just trying to simulate a room or put someone in a space. By contrast, if you’re using a reverb for music, most of the time you’re looking to make a huge statement. I’ve always wanted to make surrounds from what are predominantly mono and stereo renders that composers give me. Not many people record in surround, but I’m expected to deliver music for films that way. NUGEN Paragon gives me the ability to create an amazing surround production from mono or stereo sources.”

While working in surround with Paragon, Aitken says he can get a proper sounding musical element. “With Paragon’s capabilities, I’m able to create that feeling of being in a space and filling it out without making it cluttered and full of long, overt reverb sounds,” he says.