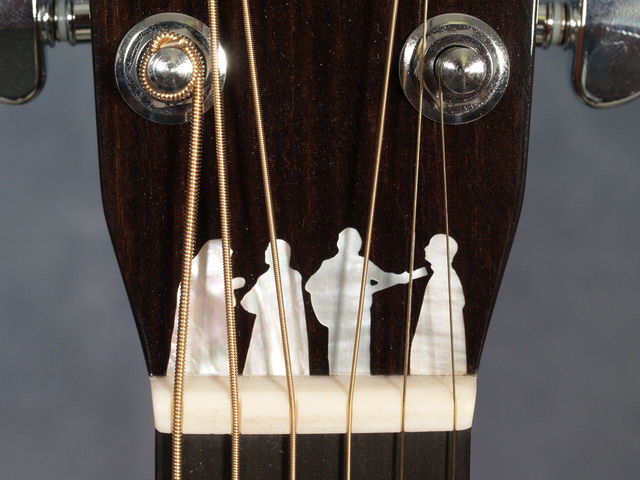 By Michael DiMattio in Martin Guitar, NAMM 2012
No comments

Dick Boak and Michelle Phillips introduced the new Martin acoustic guitar at the NAMM 2012 Media Preview day. Michelle, the last living member of The Mamas and the Papas, was joined by John Phillip’s son Jeffrey and Cass Elliott’s daughter Owen.

In the 1960s, The Mamas and the Papas were at the epicenter of a musical earthquake that began in Southern California and sent shockwaves across the country. Combining great songwriting, unique arrangements and lush harmonies, the group had six “Top 10” singles and four “Top 5” albums from 1965 through 1967, a feat that made them one of the few groups to challenge the Beatles during that era. While The Mamas and the Papas’ original lineup of John Phillips, Cass Elliot, Denny Doherty and Michelle Phillips lasted just four years, several of the songs they created – including “California Dreamin’,” “Monday, Monday,” “Words of Love,” and “Twelve Thirty” – have stood the test of time.

The starting point for The Mamas and the Papas’ fresh pop sound was the folk music all four members played before they got together as a group. Songwriter and leader John Phillips’ wellworn Martin Dreadnought often provided the strummed rhythmic underpinning on which The Mamas and Papas’ band instrumentation and vocals were layered. The combination proved to be genius, and even today The Mamas and the Papas “sound” is instantly recognizable.

John Phillips’ vintage Martin D-28 provides the inspiration for this Custom Artist Edition. The tonewoods and top bracing are a stellar combination that approximates those of Martin Dreadnoughts from the early 1930s. Back and sides are rare Madagascar rosewood, similar in appearance and tone to the now endangered Brazilian rosewood. The top is Carpathian spruce, comparable in power and brilliance to Adirondack spruce, and equally responsive. Advanced “X” 5/16” scalloped bracing provides rich, resonant tone. The 1 11/16” (at the nut) low profile neck with diamond volute is genuine mahogany, while the fingerboard and belly bridge are black ebony.

The guitar‘s crowning glory is – appropriately – on the polished black ebony headplate. Above the nut, sheltered by the familiar gold old-style “C. F. Martin & Co. Est. 1833” decal logo, is a silhouette of The Mamas and The Papas, beautifully inlaid in mother of pearl. Derived from a photo by Henry Diltz, the inlay captures the group in full performance mode.

In the early 1960s, the four musicians who became The Mamas and Papas were a long way from pop music stardom, though all were involved in the East Coast folk music scene. John Phillips was a member of the Journeymen. Denny Doherty and Cass Elliot sang with the Mugwumps. After the Journeymen broke up, John Phillips, his wife Michelle Phillips and Marshall Brickman formed the New Journeymen. Marshall eventually left the band, but went on to co-write Oscar winning screenplays with Woody Allen, and he co-wrote the book that became the record-breaking play “The Jersey Boys.”

Marshall Brickman was replaced by Denny Doherty and soon Doherty introduced his bandmates to Elliot. The four began harmonizing to the pop songs John was writing and perfected their sound during a Caribbean vacation together (This story should sound familiar; they later turned it into a hit single, “Creeque Alley”). Eventually the four traveled to Los Angeles, where they auditioned for Dunhill Records Owner/Producer Lou Adler. Adler signed them to his label immediately and two days later, the group had a name: The Mamas and the Papas.

Released in 1965, The Mamas and The Papas’ first single failed to garner much notice. However, the second single, “California Dreaming,” cowritten by John and Michelle Phillips, reached No. 4 on the charts. The group’s debut album, If You Can Believe Your Eyes and Ears, was released in early 1966 and rose to No. 1, quickly followed by the single “Monday, Monday,” which also hit No. 1 and later won a Grammy Award for “Best Contemporary Group Performance.”

In 1968, bitter infighting between members caused the group to disband. Due to contractual obligations, they reunited briefly in 1971 to make the People Like Us album and then went their separate ways. Cass Eliot had a flourishing solo career that was cut short by her death in 1974. John Phillips continued to write songs, and both he and Denny Doherty performed and recorded as solo acts. In the 1980s and 1990s, they occasionally reunited to tour as members of the Photo by Henry Diltz New Mamas and Papas. John Phillips died in 2001; Denny Doherty died in 2007. Michelle Phillips enjoyed a successful acting career and today is the last surviving original member of the group.

Despite the group’s short history, The Mamas and The Papas’ musical legacy remains undiminished; the group was inducted into the Rock & Roll Hall of Fame in 1998 and received a Grammy Hall of Fame Award in 2001. In 2003, If You Can Believe Your Eyes and Ears was ranked 127 on Rolling Stone magazine’s list of the 500 greatest albums of all time.