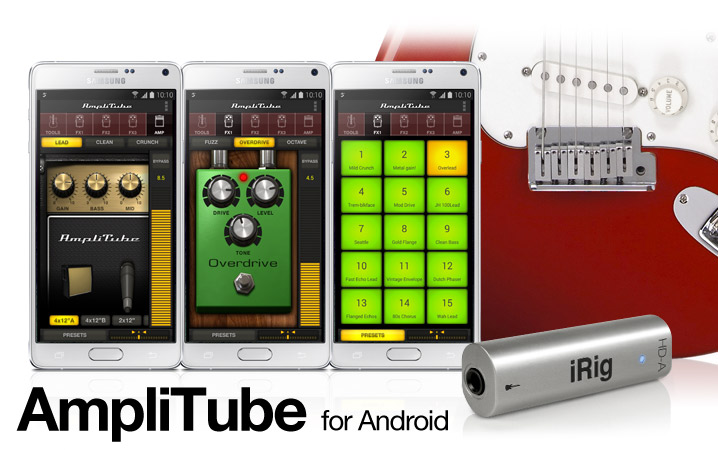 Now Samsung users will be able to connect their guitar or bass to their Android™ device and play with the sound of the most sought after amplifiers and effects from their smartphone, anytime and everywhere.

Guitar tone on a smartphone
AmpliTube is the most popular multi-effects app for mobile guitarists and bass players. It simulates the full amplification and effects chain used by musicians to perform both live and in the studio. The new AmpliTube app for Samsung Professional Audio sports a full guitar rig made of up to 3 stompbox effects, an amplifier, a speaker cabinet and a microphone.

It comes with up to 11 stompbox effects, 5 amplifiers with 5 cabinets and 2 microphones. This lets players emulate virtually any guitar tone, from clean to crunch to metal and everything in between – the entire sonic palette is covered, satisfying the needs of even the most demanding musicians.

The app also offers 15 easy to save and recall presets and a digital tuner. It has everything that’s needed for guitarists and bass players to play, practice or perform with their new Samsung devices. The app comes in 3 flavors: full, free and LE, with the difference being the number of effects and amps included. The AmpliTube LE version is part of the Galaxy Gifts app bundle that comes as a complimentary download for Galaxy Note 4 and Galaxy Note Edge users* (a $9.99 gift).

* Available in most countries. Check local Samsung website for availability.

Plug and play
And now Samsung users can connect their guitar or bass to their smartphone with the new iRig HD-A. It’s the first digital guitar interface for Android that allows plug-and-play connectivity and the highest possible sound quality. Featuring a high-definition 24-bit/48kHz A/D converter, it offers a direct high-impedance input for guitars or other instruments and a direct connection to the device via the included OTG cable (an additional USB cable is also available for use with PC).

The input signal can be regulated using the onboard gain potentiometer, while a multicolor LED displays the optimal signal level. The processed sound can be monitored from the regular mini jack output of the device through headphones or speakers.

Along with the iRig HD-A, users can also choose from IK’s range of analog interfaces, like the iRig guitar interface adapter or the iRig Stomp pedal interface. Both use the mini jack for the input/output connection with the device. Now mobile guitarists and bass players have many options that suit a wide variety of needs, applications and budgets.

Real time audio processing on Android
Previously not possible on Android devices, the AmpliTube app is now available thanks to the new Samsung Professional Audio system. Available on the new Samsung Galaxy Note 4 and Galaxy Note Edge – and soon to be available on the Galaxy S5, Galaxy Note 3 and other devices – this system allows users to process audio in real time without perceptible latency. Now Android can support AmpliTube, which means musicians can enjoy real time effects and instrument processing anytime and everywhere.

The new Samsung Professional Audio compatible devices come with Samsung SoundCamp, a free and full-fledged music studio app that lets musicians record and compose full songs entirely within the device. The AmpliTube app can be used as a standalone application but also as a plug-in inside the new SoundCamp studio for full recording and play-along uses.

Pricing and availability
The new AmpliTube app for Android/Samsung Professional Audio is available through the Samsung Apps store for only $19.99/€17.99. Free and LE versions are also available. The AmpliTube LE version (a $9.99/€7.99 value) is complementary for Samsung Galaxy Note 4 and Galaxy Note Edge users as a part of the Galaxy Gifts apps program.