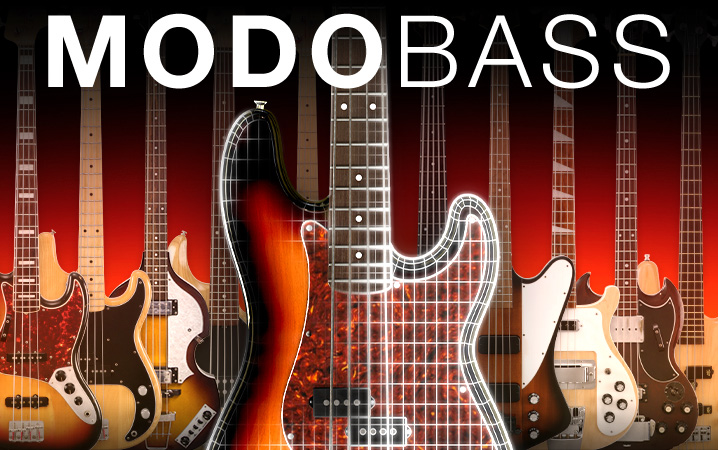 IK Multimedia, the pioneer in analog effects modeling, is pleased to announce the release of MODO BASS®, the new breakthrough physical modeling technology that brings a completely new level of realism and playability to the world of virtual bass instruments. MODO BASS is a customizable physically modeled virtual bass instrument that recreates the sound of the electric bass and how it’s played in real time – from all of the physical instrument components, the human technique of how the instrument is played, to the entire sound signal chain with effects and amplifiers. 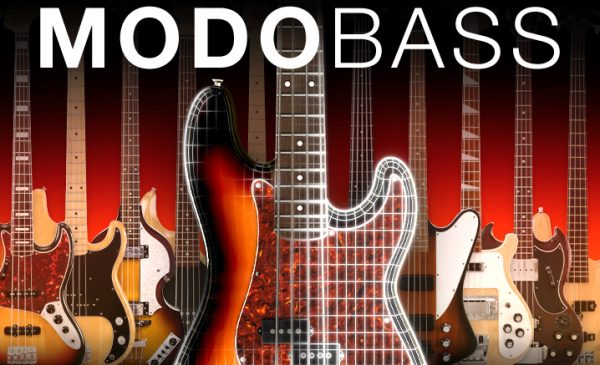 Unlike traditional sample-based virtual instruments, MODO BASS utilizes modal synthesis technology and an ultra-optimized sound engine to model each string as a nonlinear resonator – the string’s acoustic behavior is determined by its physical parameters as well as by the interaction of the string with fretboard, body and pick-ups of the instrument. The action of the player is then modeled as a nonlinear physical interaction with specific areas on the string surface. Then using IK’s cutting edge analog modeling expertise, the amp and effects rig of the electric bass is added to the sound chain. This gives MODO BASS the ability to create hyper-realistic sound in real time.

Every detail of each bass has been meticulously analyzed and modeled to capture their true sonic character; the shape and type, the wood used for the body and neck construction, the hardware components, the original onboard electronics and controls – every aspect and detail has been recreated to provide the highest degree of authenticity of the original instrument. But the sounds available with MODO BASS extend far beyond the 12 modeled basses – with the available customization features, users can craft virtually every electric bass sound imaginable. MODO BASS is able to produce an unmatched and unlimited palette of bass sounds because everything can be customized.

Once the bass has been selected, players can choose from 3 playing styles – pluck, slap or pick – and control parameters of each style and how they influence the sound. Adjustments can be made to the force applied to the strings, the position of the hand, the direction of the stroke, the fingers used to play the instrument and how the strings are approached, the impact of the thumb slap and the finger pull on the string and even the thickness of the pick and style of its attack. Every aspect of playing style has been modeled as a non-linear interaction with the strings to provide a dynamic, ever-changing sound output.

IK painstakingly studied and recreated all of the factors that affect string tone and performance. Players can choose the number of strings on the bass, the construction type and material of the strings (round or flat wound), the gauge and age, plus the physical action height of above the fretboard. Each of these options contributes its own character to the output of the bass and introduces realism never before heard in a virtual instrument.

There are 20 iconic bass pickups from which to choose that can be freely interchanged and added to the instrument – up to 2 pickups per bass. Users can change the type of pickups used, neck or bridge single coil or humbuckers, and their physical location under the strings can be moved freely for unlimited playing and tonal variations – a feature virtually impossible in the physical world. MODO BASS also gives players the ability to mix in the sound of an under-bridge piezo pickup for added resonance and top end. Switching from Passive to Active electronics option also enables a 3-band parametric EQ to fine-tune the pickup output tone.

With MODO BASS, players have full control over the post-instrument signal path as well and get 7 bass stomp boxes and two classic bass amplifiers derived from IK’s AmpliTube flagship software. Stomp box effects include an Octaver, Distortion, Chorus, Compressor, Delay, Envelope Filter or Graphic EQ. Each stomp box gives players full control over the effect applied to the signal, parameter adjustment and overall output volume into the next effect. Also available is a classic all-tube amplifier and 1×15 cab, or a solid-state model with a 4×10 cab.

Keyswitching in MODO BASS allows players to create amazingly real techniques like slides and percussive ghost notes. Users can switch on the fly between chord mode and note mode, the type of stroke used for playing, the fingers used and the method of playing, which provides the ability to completely customize the sound in real time.

**Any previous purchase of an IK Multimedia product with a value of $/€99.99 or more qualifies for crossgrade pricing.

To see MODO BASS in action, watch the videos: