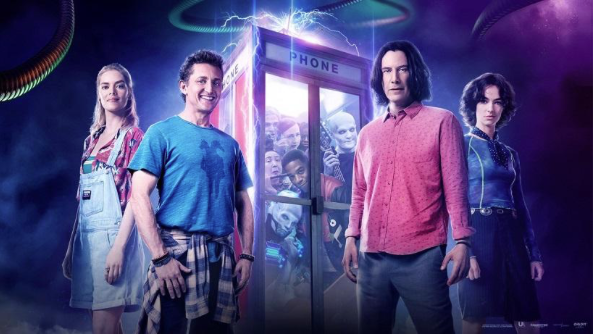 Gibson Brands–the iconic American instrument maker–has partnered with Orion Pictures on the new film Bill & Ted Face the Music as the official guitar brand of the movie. The film finds the duo–now middle-aged best friends who have yet to fulfill their rock and roll destiny–as they head out for a new adventure when a visitor from the future warns them that only their song can save life as we know it. Along the way, the Wyld Stallyns will be helped by their families, old friends, and a few music legends. Watch here: https://billandted3.com/watch.

To celebrate the release of Bill & Ted Face the Music, Mark Agnesi of Gibson TV recently sat down with Alex Winter to discuss the making of the film and what it was like to reunite with his co-star Keanu Reeves after 29 years; watch the clip HERE.

Gibson’s Entertainment Relations team worked with the producers of Bill & Ted Face the Music to get the right look and feel for the film. “Gibson Brands have been a huge part of the Wyld Stallyns story from the very beginning,” says Jonathan Leahy, Music Supervisor, Bill & Ted Face the Music. “When Rufus presents Bill & Ted with Steinbergers at the end of ‘Excellent Adventure’ that’s just an iconic movie moment, especially for all the guitar players in the audience. The customized Gibson SG and Flying V that Alex and Keanu play at the end of ‘Bogus Journey’ were a perfect match for the second film. In ‘Bill & Ted Face the Music’, we wanted to deliver for the fans and get the gear details right. Gibson came through for us in a big way; you can’t make a third Bill & Ted film without Gibson.” Bill & Ted Face the Music film producers Scott Kroopf and Alex Lebovici added, “Gibson has been a part of Bill & Ted since its inception and they have been amazingly supportive in the making of Bill & Ted Face the Music” (Kroopf); “You don’t need to know anything about guitars to be totally blown away by the Gibson guitars featured in the film. Gibson really made its mark on the film” (Lebovici). Ashley Waldron, Executive in Charge of Music/Co-Producer added, “Having Gibson continue to be an integral part of the Bill & Ted story has been a testament to their vision and brand.”

For the Gibson Entertainment Relations team, collaborating with filmmakers and producers is all about character development and working with both the actors and the film producers to find the right match, tone, and validity for the narrative. The guitar itself can take on a character of its own and help the story come alive. “Bill & Ted Face the Music celebrates the power of music to unite and save the world, which is a message we believe in and share at Gibson” says Beth Heidt, Global Director of Entertainment Relations at Gibson Brands. “This film is a great partnership and it’s been a lot of fun to explore the instruments that best fit these beloved characters and the music they create.”

Gibson Brands’ guitars have starred in thousands of Films, TV shows, and commercials across the world. Gibson specially created the two guitars which Bradley Cooper performed with in A Star Is Born including an acoustic guitar, the Gibson J-45 (“Shallow”), and an electric guitar in the film’s opening scene, a custom Gibson ES 345 in olive drab. Look out for Gibson in the forthcoming Bob Dylan film Going Electric, as well as the new Elvis Presley biopic, Elvis, co-written and directed by Baz Luhrmann, and starring Austin Butler and Tom Hanks. Other recent film collaborations include Many Saints of Newark (Sopranos prequel), Crazy Heart (Jeff Bridges), Blaze (Ethan Hawke), Ray (Ray Charles, guitars and pianos), I Still Believe, Coda (doc), School of Rock, Iron Man (1-3), among many more. TV collaborations for Gibson include, The Voice, This is Us, Silicon Valley, Nashville, Empire, Dead To Me, Jeff Garlin Comedy Special (Netflix), Songland, Daybreak, and Neighborhood, to name a few. In addition, global ads have taken center stage, including the Apple (Elvis), DHL (Bryan Adams) filmed at Gibson USA Nashville), Dior (Johnny Depp), and more.

Following is a list of the Gibson, Epiphone, Kramer and Steinberger instruments featured in Bill & Ted Face the Music:

Across all of Gibson’s brands and collections, the story continues to be told with iconic and emerging artists that inspire the now and nurture the next generation of Gibson, Epiphone, Kramer, and Steinberger fans.