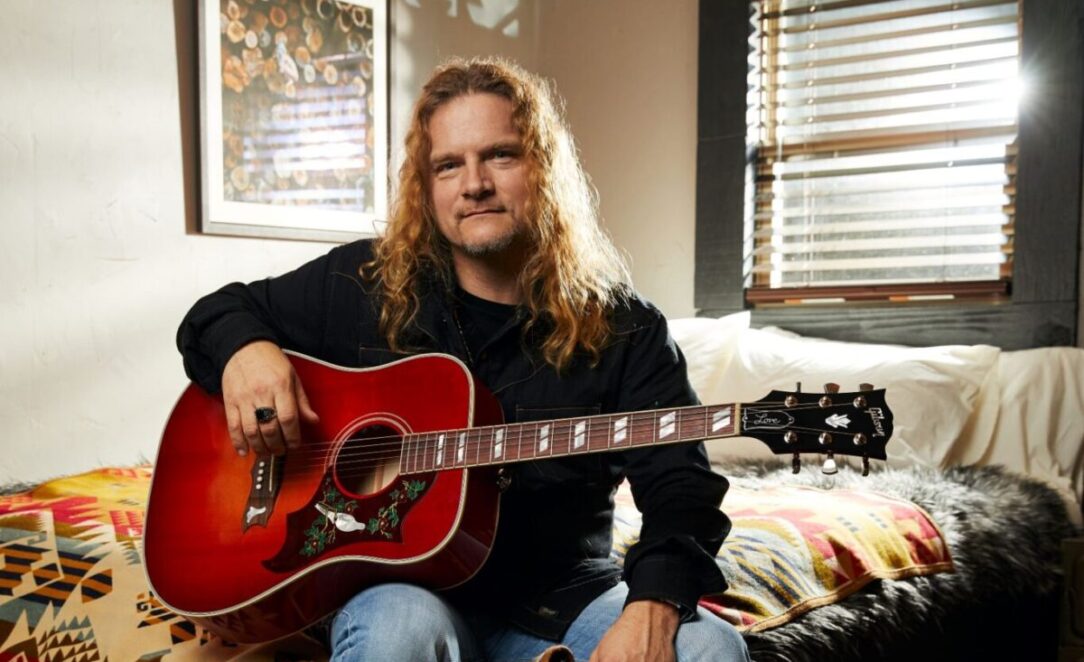 By leveraging its iconic past and leaning into an innovative future, Gibson has set the stage for the next era of shaping sound for present and future generations. Gibson is proud to announce a new acoustic collaboration with Frank Hannon, the acclaimed solo artist, guitarist, songwriter and co-founder of the multi-platinum band TESLA. The new Frank Hannon “Love Dove” acoustic guitar marks Frank’s first signature guitar in his 35-year music career and is now available worldwide at all Authorized Gibson Dealers.

Frank used his 70’s era Gibson Dove to write and record numerous songs, including the TESLA hits “What You Give,” “Stir it Up,” he also recorded the celebrated intro to the ballad “Love Song” for the “Times Makin Changes” video collection. After trying many acoustic guitars, it’s the Gibson Dove model that Frank has faithfully used to record and tour with for the past 30 years. The new “Love Dove” model guitar can be seen and heard on TESLA’s latest release 5 Man London Jam recorded at the world famous Abbey Road studios, and it is filled with love, power and performance like Frank’s lyrical, vocal and musical prowess.

The Frank Hannon “Love Dove” acoustic guitar is highly customized featuring a thermally Aged Sitka spruce top, married to a maple back and sides, allowing for supreme response and resonance. A 70’s era Dove bridge with scalloped wings decorated with mother-of-pearl wing inlays adorn the center, and the highly desirable Dove pick guard features hand-engraved and painted details. Each “Love Dove” comes in Vintage Cherry Sunburst and is commemorated with a signed inside label by Frank Hannon and custom Love engraved truss cover written by Frank himself.

Raised on the psychedelic sounds of Jimi Hendrix, Grateful Dead and others from the San Francisco era as a child, Frank Hannon developed his love for hard rock throughout high school in the 80’s. A founding member and lead guitarist of the multi-platinum band TESLA, Frank is also an accomplished singer-songwriter, producer and solo artist. Having a strong passion for all genres of music, he has recorded several solo albums including Guitarz From Marz, Gypsy Highway, Six-String Soldiers, World Peace and his latest two volume cover series From one place…to Another!. Playing both Electric and Acoustic guitars, Piano, B3 organ, Bass and just about any instrument he can get his hands on, Frank loves to experiment with blues, country, folk and jamming improvising styles beyond what he is most famous for in the rock genre. Frank is a passionate about spending time with his wife and riding horses on his central coast ranch. Frank recently launched “The FAR OUT! Podcast with Frank Hannon” via Apple podcasts. For the show, Frank sits down with music luminaries and colleagues to discuss their careers and challenging themselves in our ever-evolving world.

Tell us the story behind the creation of your new “Love Dove” acoustic guitar.

“The creation of my first ever signature model came about when I met the new CMO of Gibson Cesar Gueikian thru the head of the Gibson acoustic division Robi Johns at the 2019 NAMM show. As it turns out, both Robi and Cesar are admirers of my acoustic guitar playing, in particular the classically inspired music of the ‘Love Song’ intro. Cesar and his wife had included this piece of music in their wedding years prior, and this connection felt very special. Since the Gibson Dove model has been my favorite acoustic guitar that I’ve used on tours for 30 years, the idea came to make a special edition that is based on the ’70’s Dove I played in the greatest hits video version of ‘Love Song’ and pay tribute to my career.”

“Well…haha ‘like’ isn’t the right word…I LOVE IT! The thermally aged process that is used for the top gives it the feeling and sound of an old vintage, seasoned guitar. The Batwing carved bridge, and Vintage Cherry Sunburst finish along with AAA flame maple back and sides make this guitar very unique. This is a classy and beautiful instrument. The tone produced by this Love Dove is both warm and bright.”

What is your personal history with Gibson guitars?

“As a kid starting out, I always dreamed of playing a Gibson Les Paul guitar because of my heroes Peter Frampton and Jimmy Page. One of my other guitar heroes is Frank Marino and he sparked my love for the Gibson SG. I mowed lawns and saved money for the first SG I got at a pawn shop when I was 16 years-old and played it in the clubs in the early 80’s. In the mid-1980s, the trend was striped and pointy guitar brands, but I favored the classic style and tone of Gibson SG’s and Les Paul’s and I always used those for electrics. I didn’t realize that Gibson also made the best acoustics until after going thru several different other acoustic brands and discovering the Dove. I first visited the Nashville Gibson factory in 1987 on my first national tour opening for Def Leppard, and through my association with Steve Steamin’ Clark, I was introduced to the staff at the factory. They were very supportive of me as a guitarist bestowing to me a Cherry ES 1275 double neck guitar that I still use today. Throughout the changes in Gibson’s leadership, I had been offered signature endorsements with other companies, but always felt loyal to the sound of Gibson guitars. Now the new leadership and artist team at Gibson is better than ever and I am very proud to still be a part of the Gibson legacy.”

Tell us about the “Live At Abbey Road” project.

“TESLA was scheduled to perform at the U.K.’s Download festival and a few other European dates last year. While we were overseas, we decided to book a day at the legendary Beatle’s Abbey Road Studio in Room #2 where all those albums were made. We wanted to record a new live version that pays tribute to our 5 Man Acoustic Jam album that was our hit in 1990 and also celebrate our 30-year anniversary. We recorded a live performance and made a blue ray DVD set with new songs on it too. It was such an experience to record in that legendary room and the sound of the walls reverberating was both chilling and amazing! Being able to play on John Lennon’s piano is something I’ll never forget. I played the new ‘Love Dove’ prototype #1 guitar for most of the recording along with a Gibson J-45 that was loaned to me by the Gibson Showroom in London. These guitars can be seen and heard on the newly released ‘5 Man London Jam’ set.”

What Gibson artists inspired you to play and who might still inspire you today?

“Frampton Comes Alive was a huge influence on me as a 10-year-old guitarist in 1976. His Gibson Les Paul Custom Black Beauty guitar was my dream guitar! I also love southern rock and Dickey Betts with his Gibson SG and Goldtop Les Paul’s along with Lynyrd Skynyrd’s Gary Rossington are both huge influences. As for today’s guitarists, I’d say that Jared James Nichols and his “Blues Power” style are inspirational to me for the younger generation. I also heard Emily Wolfe and Reese Malone perform at NAMM this year and they are awesome young generation Gibson artists.”

Tell us about the guitars you’re playing right now. What are they?

“I recently got an SG Diablo with a Floyd Rose Tremolo that I love for the purpose of playing the radical sounds you can only get from a Floyd Rose system. I use SG standards mostly and I just was given a gift of a beautiful 1971 Cherry Sunburst Les Paul Custom from my friend Greg at Bizarre Guitar shop in Reno, NV. It sounds great. Of course, I am playing the ‘Love Dove’ and just did a recording session with a young band allowing their guitar player to use it to record in the studio.”

How do you go about choosing a guitar that will be appropriate for the demands of playing in TESLA?

“It always will depend on the song and the style of sound in the song. TESLA is a very dynamic band with different styles mixed into our songs, so for example if it’s a cleaner sound needed, I will pick my Gibson SG that has coil tap pickups that I can clean up for picking notes. If it’s a chunky heavy riff song, I will play my Gibson Les Paul Custom or a Flying V.”

If you only had one instrument to play for an entire gig, what would it be and why?

“For TESLA I would probably pick my SG Standard that has the coil tap pick-ups. It is very versatile and balanced, being able to get both heavy rock sounds and clean picking sounds. If it was a solo gig, I’d bring my ‘Love Dove’ acoustic and sing songs.”

What’s happening in your world right now? Any new music? Any message you’d like to send to your fans?

“Well just like everyone else I’ve been forced to stop playing concerts, so after processing this change and taking April and May completely off, I have now decided to get back to producing and recording artists in my studio. I am mentoring a few younger bands and I just produced a song with a positive message about the current crisis called ‘Rise Up!’ with a band called Red Voodoo. These guys are 17 years-old and I love being a coach and mentor to the new generation of guitarists. Another kid I produce is JT Loux and he’s a very talented dynamic songwriter. TESLA just did an isolation lockdown video session that is coming out. I recorded and mixed the audio music for that project as well. I would say that recording is a skill that all musicians should learn. I have always loved recording and producing demos for other artists as well as my own music in the studio. I am focusing on building Frank Hannon Productions as my work producing both audio and video media in the studio. Until we can all get together and celebrate in a live concert setting, please be safe and take care! Peace and Love…Frank Hannon.”