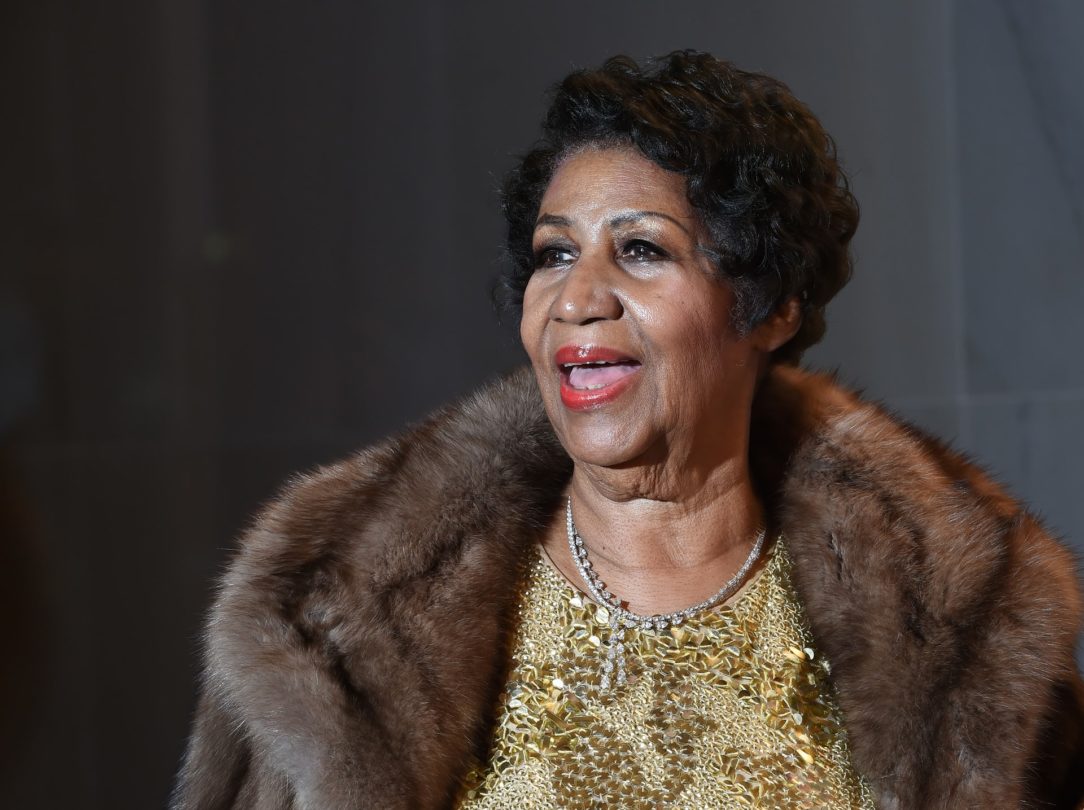 Regarded as one of the greatest singers of all time, Aretha Franklin has died of advanced pancreatic cancer

The great American soul singer Aretha Franklin has died at the age of 76, her representative has said. She was reported to have been gravely ill with her family at her bedside.

“In one of the darkest moments of our lives, we are not able to find the appropriate words to express the pain in our heart. We have lost the matriarch and rock of our family. The love she had for her children, grandchildren, nieces, nephews, and cousins knew no bounds,” Franklin’s family said.

Franklin had been in ill health since 2010, when she was diagnosed with a tumour but returned to intermittent live performance after undergoing surgery. She died of advanced pancreatic cancer. Despite having announced her retirement from performing in 2017, she was due to headline two shows at the New Orleans Jazz and Heritage Fest this April but cancelled on doctor’s orders. Her last performance was at the Cathedral of Saint John the Divine in New York City during Elton John’s 25th anniversary gala for the Elton John Aids Foundation on 7 November 2017.

Known as “the queen of soul”, Franklin sold more than 75m records in her lifetime and won 18 Grammy awards. She had 77 entries in the US Billboard Hot 100 and 20 No 1 singles on the R&B chart. Her last album was A Brand New Me, released in November 2017, which paired archival vocal recordings for Atlantic Records with new orchestral arrangements by the Royal Philharmonic Orchestra. Her last original recording was Aretha Franklin Sings the Great Diva Classics in 2014, which included her take on Adele’s Rolling in the Deep.

“American history wells up when Aretha sings,” former US president Barack Obama said of her performance of (You Make Me Feel Like) A Natural Woman at the 2015 Kennedy Center Honors. “Nobody embodies more fully the connection between the African-American spiritual, the blues, R&B, rock’n’roll – the way that hardship and sorrow were transformed into something full of beauty and vitality and hope.”

In the wake of her death, some of America’s most prominent figures have paid their respects. Barack and Michelle Obama put out a joint statement, reading, in part:

Every time she sang, we were all graced with a glimpse of the divine. Through her compositions and unmatched musicianship, Aretha helped define the American experience. In her voice, we could feel our history, all of it and in every shade—our power and our pain, our darkness and our light, our quest for redemption and our hard-won respect. She helped us feel more connected to each other, more hopeful, more human. And sometimes she helped us just forget about everything else and dance.

Bill Clinton, at whose 1993 inauguration gala Franklin performed, said in a joint statement with Hillary Clinton: “She will forever be the Queen of Soul and so much more to all who knew her personally and through her music. Our hearts go out to her family and her countless fans.” In a separate tweet, Hillary wrote: “mourning the loss today of Aretha Franklin who shared her spirit and talent with the world. She deserves not only our RESPECT but also our lasting gratitude for opening our eyes, ears and hearts. Rest in eternal peace, my friend.”

Donald Trump wrote a calm – if rather unmusical – tribute on Twitter. “The Queen of Soul, Aretha Franklin, is dead. She was a great woman, with a wonderful gift from God, her voice. She will be missed!”

Her final live performance was at a gala event for Elton John’s Aids foundation, in November 2017. John posted a tribute on Instagram, saying: “The loss of Aretha Franklin is a blow for everybody who loves real music: Music from the heart, the soul and the Church. Her voice was unique, her piano playing underrated – she was one of my favourite pianists.”

Carole King, who co-wrote Franklin’s classic song (You Make Me Feel Like) A Natural Woman, said on Twitter: “What a life. What a legacy! So much love, respect and gratitude.” Paul McCartney called her “the Queen of our souls, who inspired us all for many many years”.

Franklin was born on 25 March 1942 in Memphis, Tennessee. The family moved to Buffalo, New York, when Franklin was two years old, and settled in Detroit, Michigan two years later. It was in Detroit, shortly after her mother’s death, that the 10-year-old Franklin started singing solos at New Bethel church, where her father was a preacher whose political sermons led Martin Luther King to stay with the family when he visited Detroit.

Clarence LaVaughn (CL) Franklin began managing his daughter and included her in his “gospel caravan” church tours. He assisted Franklin in signing first to JVB Records, which released her debut, Songs of Faith, in 1956, then to Columbia to pursue a pop career. After a first flush of success in the early 1960s, Franklin signed to Atlantic in 1966, where she flourished with an extraordinary run of singles including her cover of Otis Redding’s Respect, (You Make Me Feel Like) A Natural Woman and I Say a Little Prayer. In 1972, she released the live album Amazing Grace, which showcased her gospel background.

While her success had dimmed by the mid-1970s, Franklin revitalised her career in the 1980s thanks in part to a series of astute collaborations. Now signed to Clive Davis’s Arista Records, she duetted with George Benson, George Michael and, on their 1985 single Sisters Are Doin’ It for Themselves, the British synth-pop duo Eurythmics.

Franklin continued to release albums and perform throughout the 1980s and 1990s, and received the Grammy award for lifetime achievement in 1994. In 2005, she was awarded the Presidential Medal of Freedom. In 2009, she performed My Country, ‘Tis of Thee at Obama’s first inauguration.

Franklin announced her retirement from performing in February 2017 (though she would later return to the stage). Stepping back from performing was bittersweet, she said. “This is what I’ve done all of my life.” But, she added: “I feel very, very enriched and satisfied with respect to where my career came from and where it is now.”

Franklin was working on an as-yet unreleased album featuring collaborations with artists including Stevie Wonder, Elton John and Lionel Richie, she told Billboard in June 2017. In January 2018, Franklin’s long-term collaborator Clive Davis confirmed that the singer Jennifer Hudson would portray Franklin in the upcoming biopic Queen of Soul. Franklin had described Hudson as one of her first choices for the MGM film.

Franklin’s musical influence is immeasurable. “The soulfulness comes from the gospel,” Beyoncé once said. “It comes from Aretha, who listened to all of that, who sang in the church.” She has been sampled by artists including Kanye West, Outkast and Alicia Keys.

It is almost matched by her political legacy. Her father CL helped Martin Luther King organise the Walk to Freedom; at King’s funeral in April 1968 she performed Thomas Dorsey’s Precious Lord. Respect, meanwhile, became hailed as a defining song of both the feminist and civil rights movements.

In a 2015 interview with Vogue, Franklin said that neither song was recorded with political intentions. “It’s important for people,” she said of Respect. “Not just me or the civil rights movement or women – it’s important to people. And I was asked what recording of mine I’d put in a time capsule, and it was Respect. Because people want respect – even small children, even babies. As people, we deserve respect from one another.”

Since you’re here…
… we have a small favour to ask. More people are reading the Guardian’s independent, investigative journalism than ever but advertising revenues across the media are falling fast. And unlike many news organisations, we haven’t put up a paywall – we want to keep our journalism as open as we can. So you can see why we need to ask for your help.

The Guardian is editorially independent, meaning we set our own agenda. Our journalism is free from commercial bias and not influenced by billionaire owners, politicians or shareholders. No one edits our Editor. No one steers our opinion. This is important because it enables us to give a voice to the voiceless, challenge the powerful and hold them to account. It’s what makes us different to so many others in the media, at a time when factual, honest reporting is critical. The Guardian’s investigative journalism uncovers unethical behaviour and social injustice, and has brought vital stories to public attention; from Cambridge Analytica, to the Windrush scandal to the Paradise Papers.

If everyone who reads our reporting, who likes it, helps to support it, our future would be much more secure. For as little as $1, you can support the Guardian – and it only takes a minute. Thank you.