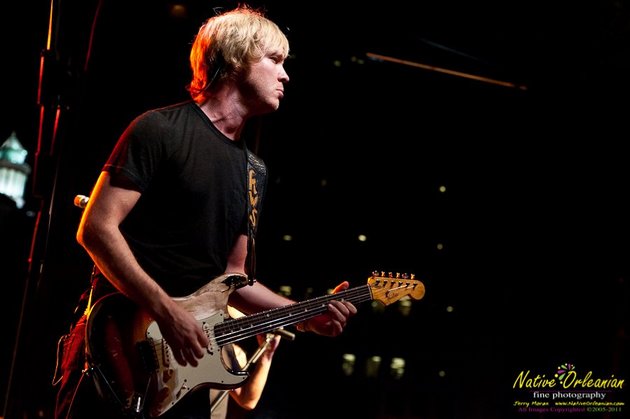 The press was on hand to see and hear Kenny Wayne Shepherd as he demonstrated the capabilities of this new guitar interface for iPhone and iPad. The sounds and features are quite impressive but we’ll have to wait until the Q2 2012 release for pricing and availability. 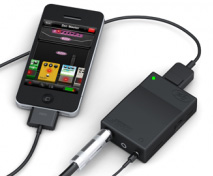 The press was on hand to see and hear Kenny Wayne Shepherd as he demonstrated the capabilities of this new guitar interface for iPhone and iPad. The sounds and features are quite impressive but we’ll have to wait until the Q2 2012 release for pricing and availability. The original AmpKit was launched at NAMM 2011 by Phil Collen of Def Leppard and many more world class guitar players are endorsing the product. The press event also commemorated the one millionth download of Guitar World’s Lick of the Day App which is a perfect complement to AmpKit.

AmpKit LiNK HD features a host of innovations that make virtual guitar amplification—and gigging with your iOS device—more convenient than ever. AmpKit LiNK HD will charge your iPad®, iPhone®, or iPod®touch while you play when connected to the optional AC adapter. And with AmpKit LiNK HD, you can send your signal to a headphone output and a line output, making it the ultimate in convenience and ideal for gigging.

AmpKit LiNK HD connects an electric guitar or bass directly into the dock of an iPhone, iPad or iPod touch via a snug-fitting cable, so it won’t disconnect while in use. Together, AmpKit LiNK and AmpKit—the guitar amps, effects and recording app for iOS devices developed by Agile Partners—provide guitar and bass players with a powerful,convenient way to jam wherever they go.

Guitar players no longer need to carry a separate interface for mobile iOS and a computer. AmpKit LiNK HD is compatible with iPhone 4, iPhone 4S, iPad, iPad 2, and iPod touch (fourth and fifth generation), and is also a high-quality guitar interface for Mac® and PC with the included USB cable. With the AmpKit LiNK HD, there is no need to launch an app to change input or output levels, because the control knobs for guitar input level and headphone output level are right at your fingertips on the interface.

The AmpKit LiNK HD is built solid, with sturdy jacks and cable connectors and a rubberized non-slip coating that won’t get away from you. Add-on accessories such as a belt and strap clip make the device mountable for on-the-go jamming.

AmpKit is available in two versions—AmpKit, a free app, and AmpKit+, $19.99 U.S.—on the iTunes App Store. AmpKit’s in-app Gear Store offers the largest gear selection of any amps and effects app, including 19 amps with 35 separate amp channels, 22 effects pedals, 20 cabinets, 8 mics and more gear on the way. The Peavey amps in AmpKit include the Peavey 3120™, Peavey 6505® Plus, Peavey 6534™ Plus, Peavey Classic® 30 and Peavey ValveKing®.