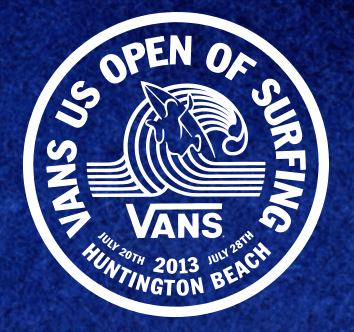 By Michael DiMattio in huntington beach, US Open of Surfing, Vans
No comments

Vans, the original action sports footwear and apparel brand, is ramping up for its first year as title sponsor of the highly anticipated Vans US Open of Surfing in Huntington Beach, California. Since announcing a three-year partnership with IMG, owner and producer of the US Open, six months ago, Vans has been setting the stage for the ultimate Vans cultural experience in surf, skate, BMX, art, and music. The Vans US Open of Surfing will take place July 20-28, 2013.

“With just a few weeks remaining until the Vans US Open of Surfing launches, we are very excited about the progress being made. Working closely with IMG, the city of Huntington Beach and the entire surf and skate industry, we are confident Vans will bring the Open back to its roots and provide event-goers a true Off the Wall experience,” said Doug Palladini, Vans’ Vice President + General Manager, Americas.

The Vans US Open of Surfing is a pivotal point on the Association of Surfing Professionals (ASP) World Tour for both the men’s and women’s events. For the men, a win at the Vans US Open – ASP Men’s Prime event – will earn them valuable points toward a coveted Top 32 world ranking. And for the women, with a close race for the World Title, the Vans US Open of Surfing marks a key stop on the Women’s World Championship Tour (WCT). Alongside the ASP World Tour stop, Vans will host the ASP Pro Juniors for men’s and women’s, prepping the field for the next generation of surfing to make their mark. Finally, rounding out the competitive surf arena is Vans’ unique longboarding event, the Joel Tudor Duct Tape Invitational presented by Pacifico, an innovative surf series that exhibits the expressive style and creativity of longboarding in its purest aesthetic.

“Growing up as a grom in California, the US Open has always had a huge impact on me. The ability to see all your favorite surfers up close was huge. I have always wanted to compete at such a prestigious event, and to win in front of my family and friends would be a dream come true,” said Vans surf team rider, Pat Gudauskas. He added, “As part of the Vans team, it’s amazing to see Vans step in and truly support surfing in their own backyard. It’s going to be a great experience and I’m looking forward to being there!”

From the shoreline to the street, the action continues to thrive with the introduction of a brand new bowl jam, the Van Doren Invitational. Featuring a $130K total prize purse, the contest is set to host the most talented and diverse crew of Pro and Amateur riders in skateboarding and BMX. Holding true to Vans heritage, the Van Doren Invitational is pleased to bring back BMX and women’s skateboarding events, along with the new Van Doren Shop vs. Shop bowl battle. In another exciting first for the Open, the inaugural Van Doren Invitational will take place in the first-ever all cement bowl on the sand in Huntington Beach, with a design inspired by the legendary bowlriders’ mecca, the Skatepark du Prado bowl in Marseilles, France. Fueling anticipation for the soon-to-be-announced line up of bands, House of Vans, the company’s Brooklyn-based music, action sports, art and street culture hub, will make its first appearance on the west coast as host of the Vans US Open music stage in Huntington Beach.

For the time in between the surf, skate and BMX action, Vans is proud to present the Van Doren Village, featuring the world’s largest photo booth, a Vans Custom Culture DIY art exhibit, and the Van Doren Kitchen, where event-goers can get BBQ burgers and hot dogs from Steve Van Doren himself. Other attractions include 100 interactive exhibits, autograph signings, DJs, giveaways, public skate and BMX course, movie nights, and a film premiere. With activities for everyone, the Vans US Open of Surfing will be the go-to event this summer.

“The US Open of Surfing is alive and well,” says James Leitz, Senior Vice President of IMG. “IMG is proud to deliver the Vans US Open of Surfing, an experience like nothing else in action sports. This event is deeply rooted in Southern California surf culture and epitomizes a lifestyle we all share.”

The 2013 Vans US Open of Surfing will run from July 20 to July 28. All events are free and open to the public and can be viewed daily on the live webcast at www.vansusopenofsurfing.com and via the US Open app.  Having initially broken viewership records over the past two years, last year’s event garnered momentum bringing the viewership to 1.5MM+, with the expectation to grow even more worldwide this year.