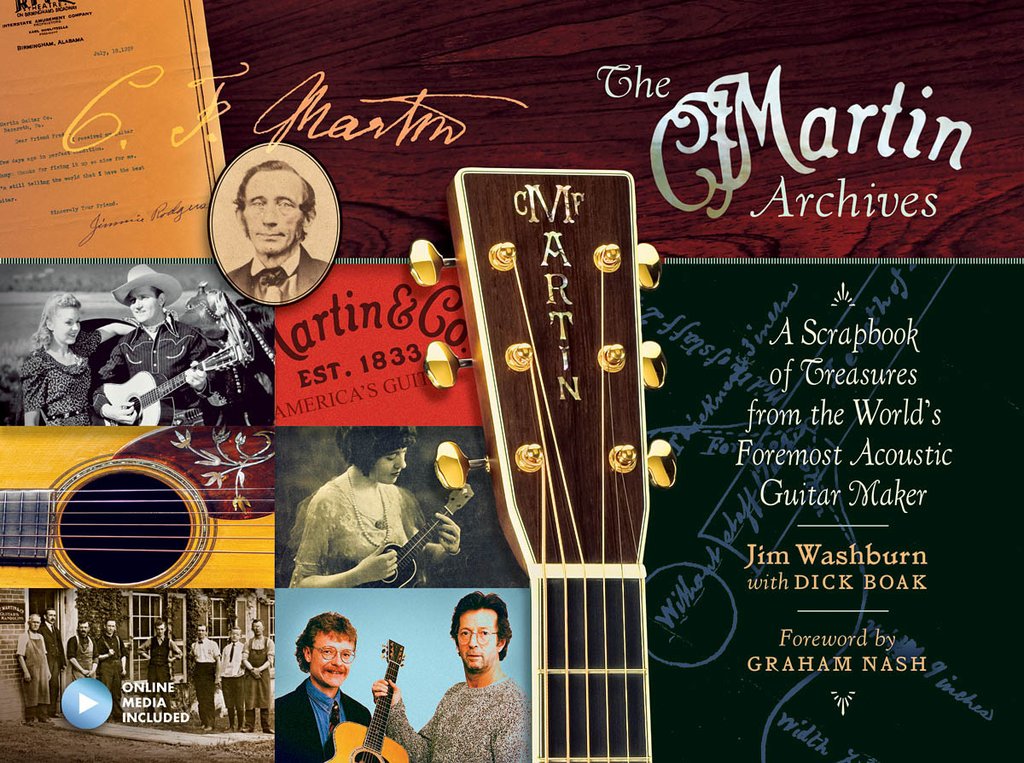 by Jim Washburn with Dick Boak | foreword by Graham Nash

C.F. Martin & Co. predates the typewriter, electric lights, and even the steam locomotive.  It would take an extraordinary book to unlock nearly 200 years of guitar making history, and The Martin Archives: A Scrapbook of Treasures from the World’s Foremost Acoustic Guitar by Jim Washburn with Dick Boak (November 2016, Hal Leonard Books, $45) is all that and more.

The Martin Archives is a unique inside look into Martin’s reign as America’s oldest and most revered guitar maker, viewed through a selection of images, documents, and reproduced artifacts chosen from some 700,000 items the company has amassed over nearly two centuries. Many of these have lain unseen in the Martin’s attic or vault for generations. From the concert halls of the pre-Civil War United States to the Grand Ole Opry stage to Woodstock, Coachella, and beyond, Martin’s instruments have been on hand to give voice to the human spirit.

The Martin Archives offers insights into those instruments and the persons who made them, as well as the times the Martins lived through.  And, beyond what can be found on its pages, The Martin Archives also contains pockets with reproductions of illuminating bits of its history, including old company records, letters from stars such as Gene Autry and Jimmie Rodgers, the purchase order for the first D-45 guitar, a handwritten history of the company on its 100th birthday by Frank Henry Martin, and other palpable delights.

In his preface, Martin Museum Director Dick Boak writes, “As you flip through the pages of this book, realize that you are taking a rare peak into the highlights, of Martin’s evolutionary position within and influence upon American musical culture.”

The history of C.F. Martin & Co. spans nearly two centuries and more that 2 million guitars. Few companies have been around this along and fewer still had the foresight to so carefully preserve their history as Martin has. The Martin Archives is a glimpse into that history and a book no acoustic guitar enthusiast will want to be without.

JIM WASHBURN is the co-author, with Richard Johnston, of the 1997 book Martin Guitars, an Illustrated Celebration of America’s Premier Guitarmaker. Since 1983, he has written extensively about music, popular culture, and musical instruments for the LA Times, Orange County Register, OC Weekly, Fretboard Journal, Guitar World, MSN online, and other publications. He lives in Costa Mesa, CA.