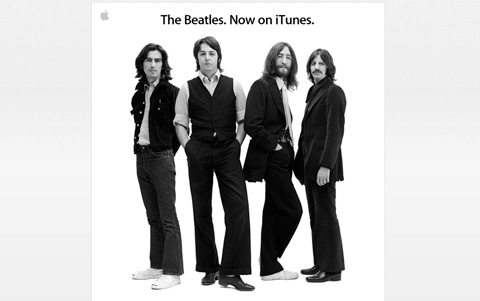 The Beatles come to iTunes

ITunes on Tuesday rolled out the Fab Four’s music for legal downloading for the first time, offering 17 albums encompassing all 13 of the group’s original studio albums, the double “Past Masters” collection of nonalbum tracks, two hits compilations and a box set including everything except the hits collections.

Individual tracks are being sold for $1.29, single albums for $12.99, double albums for $19.99 and the box set is priced at $149. The iTunes version of ” The Beatles Box Set” also includes an exclusive concert film, “Live at the Washington Coliseum, 1964,” never previously released officially.

“We’re really excited to bring the Beatles’ music to iTunes,” Paul McCartney said in a statement issued Tuesday. “It’s fantastic to see the songs we originally released on vinyl receive as much love in the digital world as they did the first time around.”

In the same statement, Ringo Starr added: “I am particularly glad to no longer be asked when the Beatles are coming to iTunes.”

Apple Chief Executive Steve Jobs said, “It has been a long and winding road to get here. Thanks to the Beatles and EMI, we are now realizing a dream we’ve had since we launched iTunes 10 years ago.”

No financial details were reported on the deal among the Beatles, Apple Inc. and EMI Records, which owns the Beatles’ master recordings. An Apple Inc. spokesman said Tuesday that company officials would have no additional comment beyond the press release.

The timing of the addition of the group’s music to the iTunes store isn’t surprising given iTunes’ posting last month of the entire Apple Records catalog of recordings, excluding the Beatles’ music. That consists of acts including James Taylor, Badfinger and Mary Hopkin, each of whom the Beatles signed and recorded in the late ’60s and early ’70s after creating their own Apple Records label.

Tuesday’s announcement brought mixed reaction from Beatles fans, spanning cheers from those happy to finally to have a way to legally download their music to jeers from others who long ago ripped and burned their favorite songs off CDs or from unauthorized websites.

“Almost anyone who has wanted to download Beatles songs has already done it via P2P torrents, and they can get them free,” reader FGaron posted to The Times’ Pop & Hiss music blog. “iTunes and Apple Corps missed the revenue stream a long time ago. The songs have been available on numerous torrent sites for years.”

What kept the Beatles’ catalog off iTunes for so long was a complicated web of legal entanglements. As long ago as 1978 — long before digital downloading was a reality — Apple Corps, the company the Beatles set up to release its own music, sued Jobs’ Apple Computer over its use of the Apple name.

Shortly after the 2007 resolution of that long-standing dispute, a settlement put to rest another lawsuit between Apple Corps and EMI Records over royalty payments that Apple said was owed by EMI.

“It’s great to see Apple finally joining civilization here in 2010,” said Chris Carter, host of the long-running “Breakfast With the Beatles” program on KLOS-FM (95.5) in Southern California and on Sirius XM Satellite radio.

The Beatles have been the biggest holdout from the iTunes world, but several other major acts still have not licensed music to the downloading service, including Garth Brooks, Kid Rock, AC/DC, Def Leppard, Tool and Bob Seger.

Several of those artists have cited their opposition to iTunes’ breaking up albums into individually downloadable tracks. Others have held out because they aren’t happy with the financial terms iTunes offers musicians.

The Beatles downloads iTunes is selling are the stereo mixes of the entire catalog rather than the monaural mixes of 1963’s “Please Please Me” through 1968’s White Album that the Beatles themselves preferred. Those mixes were released last year in “The Beatles in Mono” 13-CD box set.

The new downloads are offered in the iTunes Plus format that is DRM-free using 256 kilobits per second AAC encoding and a 44.1 kilohertz sampling rate. That means the audio quality is far better than standard MP3 audio files and equivalent to the remastered CDs released last year. The iTunes Plus downloads are still short of the higher-resolution digital versions issued on an apple-shaped USB edition of the complete catalog released last year in digital files equal to the higher-quality capability of Blu-ray discs.

“I don’t think there’s a downside to it,” said radio host Carter. “Where else are you going to be able to find a copy of ‘Beatles for Sale’ when you need it late on a Friday night?”

1 comments on “The Beatles come to iTunes”