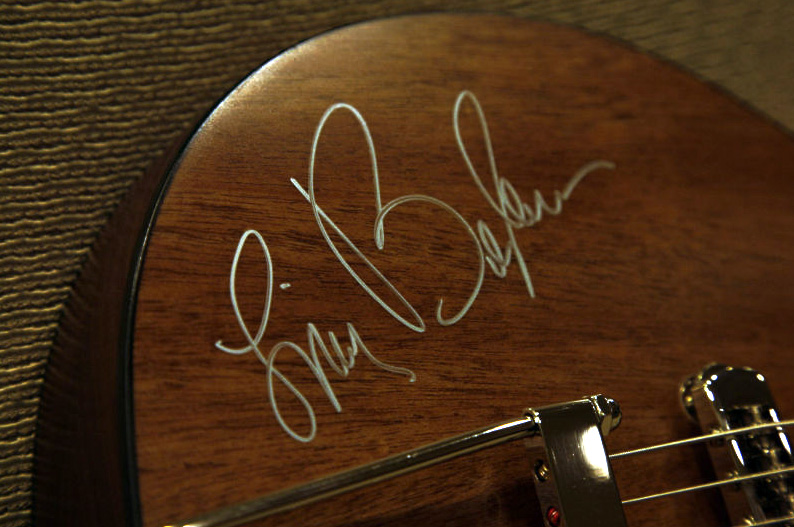 The 6th Annual TEC Awards Music & Sound Auction benefiting hearing health charities has begun, and will continue until January 30. A wide variety of hardware and software for music and sound production, as well as instruments and music memorabilia will be added as donations are made.

This beautiful, brand new Rick Turner Renaissance M1 Model Guitar was signed personally by Fleetwood Mac’s Lindsey Buckingham at the 26th Annual TEC Awards during the 2011 Winter NAMM Show in Anaheim, CA on Friday, January 14. With a retail value of $3995.00, the guitar comes complete with a luxurious gig bag and the winner will have high-resolution digital photos of the guitar being held by Lindsey Buckingham delivered via FTP at winner’s request.

First, switch the EQ out. Then adjust the tone control all the way up and then blend back and forth between the magnetic and piezo pickups. This is very different from the usual Les Paul or Strat pickup selection, and acts more like a zoom lens on a camera ranging from the more mid focused sound of the magnetic pickup to the more acoustic and wide range piezo pickup, which actually has more deep lows as well as more extended highs. When you are in the “just magnetic pickup” position on the blend knob, try pulling up on the tone knob to access the single coil sound. That is a sound more akin to the middle pickup on a Strat.

When you’ve learned your way around without the EQ, find a tone you like and then kick in the EQ with the Boost/Cut knob turned about 1/2 of the way up from the middle detent position. This would put the knob line at the 9:00 position relative to the detent being 6:00. Then sweep the middle frequency knob to hear how the boost affects tone at different registers. For the full out sound, crank the EQ boost all the way up and repeat the frequency sweep. If you are playing into a tube amp or distortion unit, you can use the EQ to voice overdrive harmonics. Lesser boost is great for finding nice tones into a clean amp as well. While most folks don’t use the “Cut” feature of the EQ, that, too, has some very nice uses.

The prestigious Les Paul Award was given to famed guitarist, composer and producer Lindsey Buckingham of Fleetwood Mac by the TEC Foundation. The award is given annually to a musician or recording professional whose work has epitomized the marriage of music and technology. Renowned producer Ken Caillat and engineer Elliot Scheiner presented the award, which was introduced by TEC Hall of Fame engineer Al Schmitt. After the awards show, Lindsey Buckingham personally signed this wonderful new M1 model with a silver Sharpee and along with Rick Turner of Rick Turner Renaissance Guitars, donated it to the TEC Foundation to raise money for the foundation’s charitable causes. This hand-made guitar is hard to find, and signed by Lindsey, even harder to find. A rare treat for both the discriminating seeker of excellent guitar tone as well as the Fleetwood Mac fan, this auction presents a once-in-a-lifetime chance to own a prized guitar held, signed and photographed with Lindsey Buckingham with all of the proceeds going directly to the very worthy causes supported by the TEC Foundation for Excellence in Audio.

Founded in 1985, the Technical Excellence & Creativity Awards is the foremost program recognizing the achievements of audio professionals. Presented annually by the TEC Foundation for Excellence in Audio, the TEC Awards recognizes the individuals, companies and technical innovations behind the sound of recordings, live performances, films, television, video games, and other media.

TEC Awards nominations are made by a panel of industry professionals and voted upon by members of various professional organizations and audio industry websites. The awards are divided into two categories: Technical Achievement and Creative Achievement. Through its Hall of Fame, the TEC Awards honors the pioneers of audio technology and the music industry’s most accomplished producers and audio technicians. The Les Paul Award pays tribute to musical artists and others whose work has exemplified the creative application of audio technology.

Items currently up for bidding are:

New auction items will be added daily! To make a tax-deductible donation to the TEC Music & Sound Auction, email Mike Lawson or call (615) 870-9333.