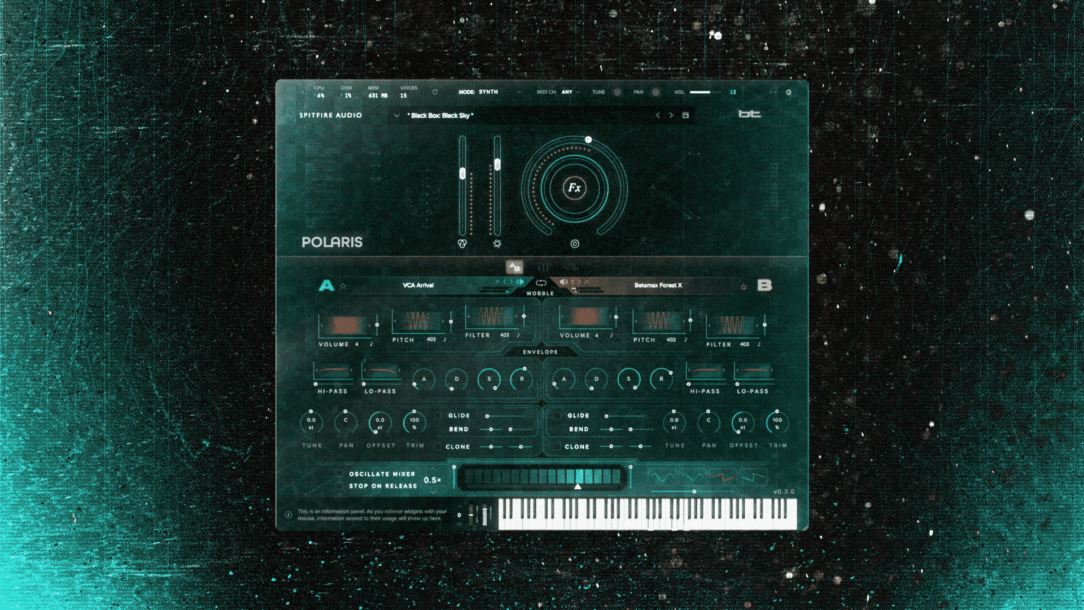 Polaris is comprised of some raw STRING ORCHESTRA, some classic SYNTHS, but it’s the VINTAGE RESAMPLING that makes this library completely unique and brings us into 2022

Spitfire Audio is proud to present POLARIS as a modern string orchestra imitating classic synth sounds fresh from the multi-talented mind of GRAMMY-nominated American electronic music composer, software developer, DJ, film composer, and technologist Brian Transeau (a.k.a. BT) — the trailblazer’s second creative collaboration with Spitfire Audio as a mesmerising aural innovation that tastefully pairs the worlds of orchestra and synthesis, recorded at London’s legendary AIR Studios, resampled through rarefied sonic pathways, and housed in the British sound-specialising music technology company’s award-winning plug-in (AAX-, AU-, VST2-, and VST3-compatible, NKS-ready) that loads into all major DAWs (Digital Audio Workstations) without the need for any additional software to deliver endless sonic exploration as a sample of the orchestra that reflects the sounds composers have long reached for in use for media; successfully mixing organic strings and synth lines to create something otherworldly, something beyond the realm of our known universe — as of April 7…

Spitfire Audio co-founder Christian Henson — himself no stranger to working on television and film soundtracks, as well as soundtracking video games, as a BAFTA- and Ivor Novello Award-nominated composer — helpfully puts POLARIS in its rightful place by both posing and answering an obvious opening question: “What is it? Well, imagine a string orchestra playing classic synth-type sounds. This, for me, epitomises our efforts at Spitfire to keep our industry moving forward — to keep things fresh, and to provide choice. It’s an insanely deep library. It’s basically an Aladdin’s cave for you to enjoy.”

My greatest passion is inspiring people through evocative music that speaks directly to the human condition, and through new music technologies that encourage the creative spark.

Enter a world of massive multi-layers of complex yet accessible organic string orchestral recordings, reimagining resampling using an array of classic and rare electronic instruments, including BT’s beloved Fairlight CMI Series III — the third version of the so-called Computer Musical Instrument introduced in 1985 as a marked improvement on the seminal (digital) synthesiser, sampler, and ‘Digital Audio Workstation’ that quite literally changed the course of modern music-making as the first commercially available sampler when originally released back in 1979 at a then-average house-matching price putting it in the hands only of a high-flying few artists and record producers like Peter Gabriel, Kate Bush, and Trevor Horn, for example — that already had history as its mainframe and keyboard were used for sound effects on the original Tron movie long before being painstakingly refurbished and customised by its current owner of note. Needless to say, other classic samplers also make their musical mark on POLARIS, such as an E-mu Emulator II — touted in the early-Eighties as a comparatively ‘affordable’ sampler/workstation synthesiser — and one of the earliest truly affordable sampler-synths in Ensoniq’s 1984-vintage Mirage. Musically, POLARIS presses into play a cosmic collection of new string techniques specifically orchestrated to emulate electronic music production techniques. The resulting eclectic and sophisticated sound library, performed by top-tier contemporary players in the hallowed (Lyndhurst) Hall at London’s legendary AIR Studios, captures the future of blockbuster scoring.

Saying that, then, POLARIS itself is perfectly positioned for creating the most modern- and unique-sounding compositions possible by duly delivering an intricate layering of all-new extended string techniques imitating classic synth sounds, orchestrated by BT himself, brought together with synths and tape resampling to create dense and provoking new timbres, thereby creating an all-new widescreen cinematic sound world. With BT, Spitfire Audio, and an amazing roll call of contemporary sound artists — including BlankFor.MS, Deft Audio, Garth & Artic — all working towards resampling the organic and synth samples involved through those classic hardware samplers of yesteryear, as well as various cassette and VHS tape machines, the resultant interstellar sonics harken back to the golden age of granular synthesis, and are inspired by such films as Arrival, Bladerunner, Logan’s Run, and Terminator 2, together with the television classic that is Dr. Who, to usher in an array of epic futuristic sounds with a firmly retro grounding.

Producing POLARIS involved arranging and recording string techniques as organic textures in a configuration complimentary to synth sounds, with basses, cello, and viola in the middle, while spreading violins wide left and right, which achieves a unique tonality that is hard to come by in other high-quality string libraries. But BT being BT, it should come as little surprise to additionally learn that POLARIS puts a stunning array of classic late-Seventies- and early-Eighties-era-defining analogue polysynths at any user’s fingertips thanks to the deep samples taken from the likes of Oberheim’s Matrix-12 and OB-Xa, Roland’s Jupiter-8, Sequential Circuits’ Prophet-5 and Prophet-T8, and Yamaha’s CS-80, all of which grace BT’s bountiful and beautiful studio setup for which he has worked so long and hard.

POLARIS patently has what it takes to seriously satisfy tweak-heads or those preferring presets alike, and achieves this by being made up of three component parts. Putting it this way, the ever-enthusiastic Christian Henson has this to say: “We’ve got an all-new MODE switch — congratulations to the engineering team for this — which switches between the eDNA (SYNTH) engine and STANDARD engine. Then there are, basically, what I would refer to as raw materials; these are what we built the eDNA presets from. It comprises of some raw STRING ORCHESTRA, some classic SYNTHS, but it’s the VINTAGE RESAMPLING that makes this library completely unique and brings us into 2022.”

The eDNA interface itself allows anyone to play and pair two such sound sources from the incredible 129 articulations available, all of which can be manipulated, layered, and blended via various FX, together with a map of how they are routed, to create a whole new personalised sound to fit their music. Moreover, “There is a new thing called GRAIN,” as Christian Henson happily points out, adding: “It’s a granulator engine, and it’s going to keep you very, very busy! Finally, there is a GATE SEQUENCER. There are two sound sources [A and B] — imagine them like oscillators, and you can select from an insane amount of raw material. And it’s the raw material that’s totally unique. The way in which it has been resampled — Fairlight, E-mu, even VHS machines — gives this very unique sound from those early sampling units that are now incredibly valuable. And some of them only sample in mono, so the team has meticulously stitched together mono samples to create stereo sources.”

On the face of it, POLARIS personifies this caring closing comment from BT himself: “My greatest passion is inspiring people through evocative music that speaks directly to the human condition, and through new music technologies that encourage the creative spark.”