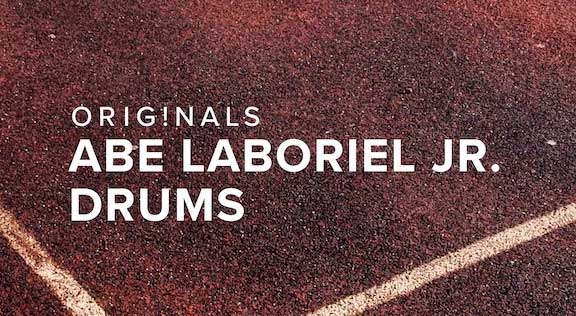 Spitfire Audio is proud to announce availability of ORIGINALS ABE LABORIEL JR. DRUMS — duly adding another dimension to its instant writing tools series as a dynamic drum kit library performed by legendary session drummer Abe Laboriel Jr., best known as Sir Paul McCartney’s touring drummer since 2001, on a bespoke drum kit at the world-renowned Henson Recording Studios in Los Angeles, USA for a tight and vibrant sound resulting in a versatile selection of highly detailed and deeply sampled single hits accompanied by a collection of 10 inspiring loop presets while offering optimal creative options for sound design through three distinctive signals served up in the sound-specialising British music technology company’s award-winning AAX-, AU-, VST2-, and VST3-compatible, NKS (Native Kontrol Standard)-ready plug-in that loads into all major DAWs (Digital Audio Workstations) without the need for any additional software — as of February 24…

“The room is integral, a major part of the sound.” So says session drummer Abe Laboriel Jr. — son of legendary Mexican-American bass guitarist Abraham Laboriel, who, having studied at the Berklee College of Music, has toured with the likes of k.d lang, Seal, Sting, and guitarist Steve Vai before becoming the drummer for Sir Paul McCartney’s touring and recording band since 2001, having also recorded and performed with B.B. King, Eric Clapton, Johnny Hallyday, Kelly Clarkson, Lady Gaga, Les Paul, Shakira, Steve Winwood, Vanessa Calrton, and more — before continuing: “It’s actually become my favourite room… I’ve done lots of records there. A lot of records now, they sound like they could have been done anywhere — missing the fingerprint of a room, a place. It’s the perfect size; the decay is really lovely, and drums have great attack there, but a lovely warmth as well.”

Which is exactly why ORIGINALS ABE LABORIEL JR. DRUMS was recorded with Abe Laboriel Jr. playing his bespoke kit in that world-renowned recording location to which the legendary session drummer is referring. After all, the Jim Henson Company-owned Henson Recording Studios, located in the historic heart of Hollywood at the former A&M Studios — itself once the headquarters to A&M Records, the longest-lived independent record label as the brainchild of American music industry magnates Herb Alpert and Jerry Moss, and originally home to comic actor, filmmaker, and composer Charlie Chaplin’s namesake Chaplin Studios — is one of the music industry’s top recording facilities, known for its world-class blend of state-of-the-art and vintage equipment, with highlights from its prolific and classic credits including albums like Tapestry (Carole King), Blue (Joni Mitchell), Rock ’n’ Roll (John Lennon), and A Kind of Hush (The Carpenters), as well as records by Eric Clapton, Fleetwood Mac, Herb Albert, Paul McCartney, and Pink Floyd, to name but a notable few artists.

As might well be expected of a world-renowned facility of Henson Recording Studios’ standing, Abe Laboriel Jr.’s bespoke kit was capably captured there as a vibrant and tight sound for Spitfire Audio’s aptly-named ORIGINALS ABE LABORIEL JR. DRUMS drum kit library with a versatile selection of highly detailed and deeply sampled single hits with up to eight layers and round robins beating at its percussive heart to offer complete control of a groove across a wide dynamic range, thanks to the inclusion of 10 easy-to-use controls — namely, expression, dynamics (controlling the dynamic level to provide the user with complete control of velocity), REVERB (with a large room-/medium hall-sized impulse response), KICK VOL. (controlling the volume level of the kick drum), SNARE VOL. (controlling the volume level of the snare drum), HI-HAT VOL. (controlling the volume level of the hi-hat), and SNARE TYPE (cycling between four different snare types). There are actually 22 different hits of all the drums and cymbals, split and duplicated across the keyboard as a General MIDI-mapped preset designed to be played with two hands.

Helpfully, this is accompanied by a collection of 10 inspiring loop presets — namely, Slow and Steady (60 BPM), Triple Threat (60 BPM), In The Pocket (90 BPM), Classic Breakbeats (90 BPM), Riding Solo (90 BPM), Swing It (94 BPM), Funky Breaks (110 BPM), Play It Again (110 BPM), Tom Kit (120 BPM), and Rock and Roll (120 BPM) — performed on the same kit, each with variations and intricate fills mapped out across the keyboard and suited to a range of styles, including pop, soul, funk, and rock, with controls for expression, dynamics (controlling the cutoff frequency of the low-pass filter), REVERB (with a large room-/medium hall-sized impulse response), EQ (custom preset ranging from vintage and colourful to bright and full), and COMPRESSION (controlling the intensity of a custom parallel compression preset).

Musically, Abe Laboriel Jr. puts his playing — playable by anyone across the keyboard courtesy of ORIGINALS ABE LABORIEL JR. DRUMS — into its rightful context, stating, “As much as I would love to say I have an original sound, I think the truth is I have an original filter. I’d listen so much and so hard to so many people that what’s original about me is not necessarily what I play but how I play it — how I interpret what’s already been done. It’s more about the energy and intensity; it’s not about the specific fills, it’s more about the intention.”

Intentions, of course, can musically flow freely with any of Spitfire Audio’s ongoing ORIGINALS series of inspiring sample libraries since users are always free to tailor their sounds to suit a range of scoring styles and genres through a range of carefully curated signals, presets, and controls. Thanks, then, to the sought-after percussive potential of Abe Laboriel Jr., a supremely talented musician who has been known to occasionally switch to playing bass, guitar, and keyboards, as well as singing when touring with Sir Paul McCartney — musical talents evidenced further still by impressively playing every instrument on his own solo album, Naked, in 2013, rest assured that anyone playing with ORIGINALS ABE LABORIEL JR. DRUMS is irrefutably in good hands.

Spitfire Audio’s namesake Spitfire Audio application allows anyone to buy now and download anytime, and is available for free from HERE

Mikes Notes: Another very useful and affordable software package from Spitfire! Watch the walkthrough video for an introduction to the sound and features. The interface is well thought out and intuitive and the drum sounds and performances are quite nice.