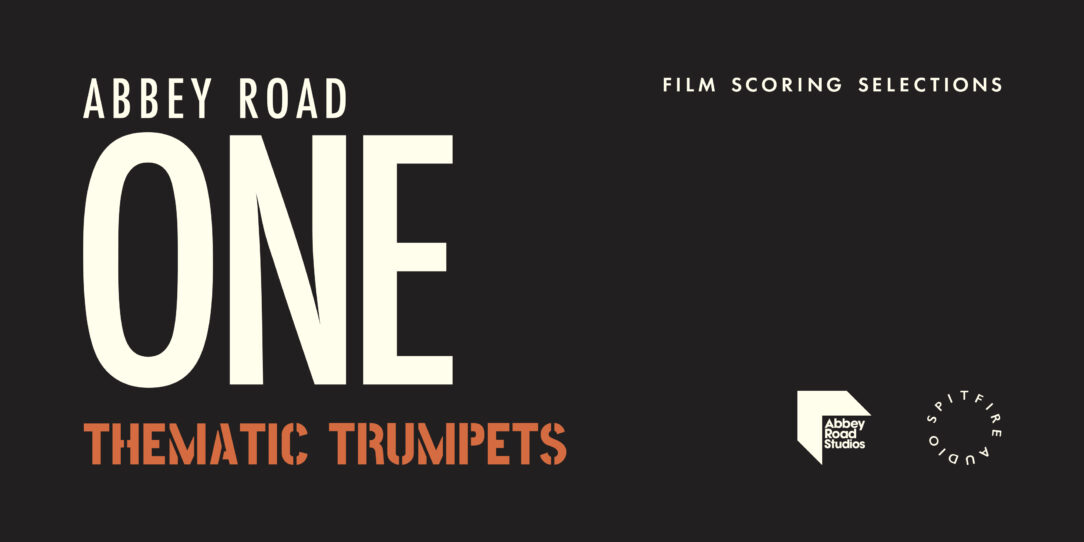 Spitfire Audio is proud to announce availability of ABBEY ROAD ONE: THEMATIC TRUMPETS — taking another step further forward in its ongoing ABBEY ROAD ONE: FILM SCORING SELECTIONS series of smaller standalone orchestral libraries capturing the iconic sound of cinema in one of the finest acoustic spaces in the world by building upon its creative partnership with world-famous Abbey Road Studios starting with the trailblazing 90-piece symphonic orchestra-utilising ABBEY ROAD ONE: ORCHESTRAL FOUNDATIONS, this time featuring four players performing a range of pre-orchestrated techniques to offer everything needed to create big screen-ready themes, including the sound-specialising British music technology company’s easy-to-use legato techniques that are helpfully housed in its award-winning (AU-, AAX-, NKS-, VST2-, and VST3- compatible) plug-in designed by composers for composers that loads directly into all major DAWs (Digital Audio Workstations) without the need for any additional software — as of March 10…

Who better, then, to formally introduce Spitfire Audio’s ABBEY ROAD ONE: FILM SCORING SELECTIONS series’ latest addition than company co-founder Paul Thomson — truly no stranger to the wonderful world of film scoring himself as an English composer for film, television, and video games, as well as a music technologist to boot: “This one is …THEMATIC TRUMPETS, with that full section trumpet sound — that singing and soaring melody sound — that you know so well from the scores of John Williams, Alan Silvestri, and Jerry Goldsmith. This really packs a punch. As with all of our [FILM SCORING] SELECTIONS, it does this one thing incredibly well.”

With a particular focus on lead lines and fanfare, this inimitable trumpet collection offers commanding presence without being piercing or clichéd, and allows anyone to establish signature themes as an heroic accompaniment to Spitfire Audio’s ABBEY ROAD ONE: FILM SCORING SELECTIONS series. The ‘Thematic’ wording in its title suggests infinite possibilities for developing narrative structure in compositions, combining with the exquisite acoustics of the world-famous recording studio to which it partly owes its notable name to propel this brass offering above and beyond. These trumpets exquisitely conjure up pomp and circumstance while providing a wide spectrum of lush dynamics — perfect for inspiring timeless motifs and creating majestic soundscapes with effortless beauty. Better still, the harmonically rich library that is ABBEY ROAD ONE: THEMATIC TRUMPETS can invigorate its users’ scores while providing a truly distinct character inspired by the singing lead lines of those legendary Hollywood A-listers listed by Paul Thomson.
The ABBEY ROAD ONE: THEMATIC TRUMPETS library features four first-call London players — the same first-call players performing on globally successful movies, in fact, and all recorded by GRAMMY® Award-winning engineer Simon Rhodes (Avatar, Hugo, Harry Potter) — performing a range of pre-orchestrated techniques to offer everything needed to create big screen-ready themes, including Spitfire Audio’s easy-to-use legato techniques. The iconic sound of cinema is literally at anyone’s fingertips, for ABBEY ROAD ONE: THEMATIC TRUMPETS users are effectively entering the room most composers can only dream of — namely, Abbey Road Studios’ Studio One. Of course, Studio One is considered to be one of the finest acoustic spaces in the world, with its history having an indelible connection with the scores recorded there, embedding emotion, mood, and magic into many of the most renowned films ever made. Musical matches made in heaven, classics such as Star Wars, Lord of the Rings, Harry Potter, and Avengers: Endgame were all recorded in Studio One. Thanks to its rich tonality and famed reverb, Studio One’s sound is widescreen and epic — truly the iconic sound of cinema.

Carefully captured acoustics from Abbey Road Studios’ famed Studio One, of course, can clearly be heard when playing ABBEY ROAD ONE: THEMATIC TRUMPETS’ easy-to-use legato techniques-exploiting LEGATO patch. Paul Thomson is — as might be expected — enthused, expanding thusly: “You’ve got that huge dynamic range — really fabulous — right down at the bottom end, but also you’ve got that full singing tone at the top of the dynamic range that is always powerful but never gets shrill or aggressive; it’s just beautiful, heroic — get your superhero vibe on, it’s so much fun! Also right down at the bottom of the dynamic range you’ve got this beautiful tone. So it’s not just a one-trick pony; you can really get these fabulous, warm, soft things going, as well as the full-tilt, epic, adventure stuff.”
Saying that, there is more to the ABBEY ROAD ONE: THEMATIC TRUMPETS library than that flexible LEGATO alone, as Paul Thomson continues: “We have our straightforward LONG notes, if you want to play a kind of chordal part, or, indeed, if you want to get a really full and very vibrant sound up there. We got a couple of different articulations to help you round out the kind of things that these trumpets would typically play. The first is the sforzando [LONG SFZ] part; this is where you have an attack at the beginning of the note, then it quickly kind of dies away into a warmer sound, which is incredibly useful for when you want that accent at the start of a note, but you don’t want the trumpets to keep blasting through — you want them to drop away quite quickly to give you the light and shade in the note. We’ve got a variety of short notes; the first one is STACCATISSIMO — really good for very short parts, so that gives you the tightest shortest sound, but we’ve also got normal STACCATO as well — not quite as tight, but, because the players are playing for slightly longer, it gives you a slightly fuller tone. The other one is short and pointed; this one is still short, but it’s a full kind of sound. We go even fuller on the TENUTO, and then last, but not least, we have the MARCATO sound. That’s the full complement of sounds in …THEMATIC TRUMPETS.”

As a riveting asset and an enduring addition to Spitfire Audio’s ABBEY ROAD ONE: FILM SCORING SELECTIONS series, the robust ABBEY ROAD ONE: THEMATIC TRUMPETS duly delivers a vast array of thematic potential — from valiant, emotive tropes to menacing, antagonistic identifiers. And as a fully-fledged standalone library building upon the trailblazing 90-piece symphonic orchestra-utilising ABBEY ROAD ONE: ORCHESTRAL FOUNDATIONS, it is recorded the same way as anyone’s favourite film composer would: with the unmistakable acoustics of Abbey Road One, exceptional players, award-winning sound engineers, and priceless microphones — albeit allowing for film score creation convenience. Indeed, it is perfectly possible to use ABBEY ROAD ONE: THEMATIC TRUMPETS to elevate an already owned symphonic orchestra toolkit or pair it with Spitfire Audio’s aforesaid ABBEY ROAD ONE: ORCHESTRAL FOUNDATIONS to create soaring, heroic themes.