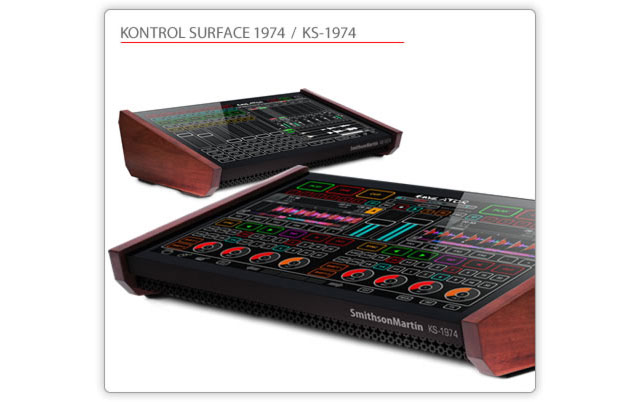 TORONTO, February 16, 2012— SmithsonMartin Inc., the company that brought musicians and producers Emulator and which released the Kontrol Surface 1974 last December, announce its new Emulator Modular 1.0 software. The new software, which is available now at several online retail stores and directly through SmithsonMartin’s website, extends the proven functionality and flexibility of the Emulator control platform to a much broader range of music professionals beyond the DJ universe.

Emulator Modular 1.0 delivers powerful capabilities for music, pro audio, lighting and A/V professionals to customize multi-touch midi-controllers, allowing them to leverage an unprecedented degree of control and flexibility over settings and parameters. The new software can benefit anyone using MIDI-based software, including music producers, video editors, broadcasters, front of house operators, lighting designers, church AV installers and many others.

“Our newest software, Emulator Modular, has been in development since early 2010 and is a game changer with applications that touch the MI, pro audio, lighting and A/V businesses,” commented Alan Smithson, CEO of SmithsonMartin. “While our goal was originally to provide DJ’s with software enabling them to fully customize touch controllers, we asked ourselves, ‘Why stop with DJs’?’ So we continued our work and made a groundbreaking platform that is applicable to all facets of the music and lighting industry. The Emulator Modular software now allows our users to add multi-touch layouts to virtually any MIDI software.”

Modular features include the following:

Emulator Modular is simple to operate and among the most advanced multi-touch software’s in the world and features:

“Emulator Modular works strictly on intuitive touch patterns, without requiring gestures,” commented Pablo Martin, CTO of SmithsonMartin. “ We designed Modular to be simple to use so anyone from any background can figure it out, and it works with any software.  People in the music production side might require different items and layout types than DJ’s or Lighting professionals.  Emulator Modular was designed with live performance in mind and its use of animated GIFs and transparent PNG images as buttons make it highly customizable.”

“We are very excited about the new touch controller and Emulator Modular software.  As lighting designers and programmers, we are always looking for new and innovative products.  We have been using the KS-1974 along with our GrandMA 2 Lighting console with remarkable results” commented Michael Meacham, President of iDesign, LLC.  “This controller expands the lighting desk both as a programming and playback device.  The Emulator Modular software has the ability to layout a virtually limitless number of executors, faders, playback buttons, macros and more.  When running shows and festivals, the KS-1974 controller allows us to quickly navigate the desk due to its customizable interface and graphics.  We have used the KS-1974 controller in permanent installs where the operators are not familiar with complex lighting systems and media servers.  The custom interface that we design takes away the layer of complexity allowing the user to easily operate the show without a deep understanding for how it’s programmed.”

Emulator Modular software, which is available now, comes bundled with all SmithsonMartin hardware; Dual View System (DVS), Kontrol Surface 1974 and The Monster.  The software costs $499 for the lifetime license for Emulator upgrades and updates. For more information, visit the SmithsonMartin site at www.smithsonmartin.com.

About SmithsonMartin Inc.
Toronto, Canada based SmithsonMartin Inc. is a software developer focused on making multi-touch applications for music production, DJ’ing and other industry applications.  Its flagship product, Emulator, has been used by DJ’s including two-time Grammy nominee, Morgan Page, Marc Romboy, Jay Frog and others. Emulator was recently reviewed in WIRED Magazine (February 2012) and featured on Discovery Channel’s Daily Planet.
http://www.smithsonmartin.com/