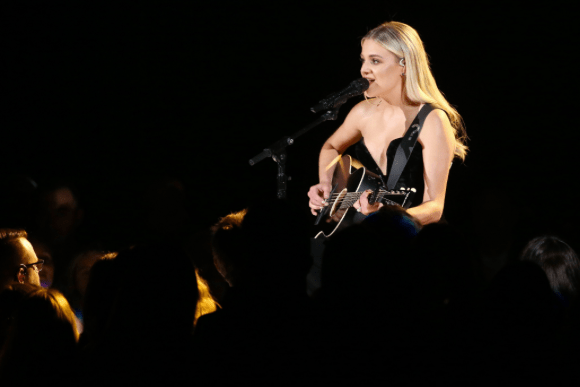 By Michael DiMattio in digital microphone, Sennheiser
No comments

The 53rd Annual Country Music Association (CMA) Awards, broadcast live from Bridgestone Arena, saw the biggest names in country music come together once again for a special evening of live music and industry recognition. Millions of viewers tuned in to see heartfelt performances from both breakthrough artists and industry legends. Throughout the evening, audio specialist Sennheiser delivered reliable and clear audio through its new Digital 6000 wireless system.

Early in the evening, Female Vocalist of the Year nominee Kelsea Ballerini took the stage to deliver a mesmerizing, stripped-down version of “Homecoming Queen”, the leading single off of her latest album. Every detail of her intimate vocal performance was captured through a Sennheiser SKM 6000 handheld transmitter, coupled with an MD 9235 capsule. Credit: Getty, photographer Terry Wyatt, Getty Images Entertainment.

The future is female

Early in the evening, Female Vocalist of the Year nominee Kelsea Ballerini took the stage to deliver a mesmerizing, stripped-down version of “Homecoming Queen”, the leading single off of her latest album. Every detail of her intimate vocal performance was captured through a Sennheiser SKM 6000 handheld transmitter, coupled with an MD 9235 capsule. Ballerini’s microphone, bedazzled with dozens of black Swarovski crystals, faithfully rendered the raw emotion of her performance. “She loves that microphone, and we love it too,” commented Chris Diener, Front of House engineer for Kelsea Ballerini. “It is not only a great sounding mic but it is part of her look as well. We take it to intimate acoustic performances, to large arenas and everything in between.”

The Sennheiser Digital 6000 is now an indispensable part of Ballerini’s equipment arsenal, explains Diener: “We’ve been using the Digital 6000 now for two years. Before we began using it, we did a shoot-out among several systems. We had several wireless systems and capsules from every manufacturer, and we all settled unanimously on the Sennheiser. It was a true, triple blind listening test, and we never looked back.” Diener says that the fans appreciate the audio quality as well: “Every night we perform, whether it is an acoustic show or an arena thing, it just sounds great on her voice.

A natural blend in Nashville

Lady Antebellum, which received a nomination for Vocal Group of the Year, performed a mashup of Halsey’s “Graveyard” along with the band’s latest single, “What If I Never Get Over You.” The four-part vocal performance, with a subtle guitar and piano accompaniment, was stunning in its presence, clarity and blend. Brett “Scoop” Blanden, who handles FOH and broadcast for Lady Antebellum, says the Sennheiser MMD 9235 capsules contributed to a sonically engaging performance: “I feel like the off axis response of the MMD 9235 capsule is really treating us well on this stage, and that we are able to attain really good isolation of Hillary [Scott], Charles [Kelley] and Dave’s [Haywood] vocals. Hillary is singing a pretty good distance from the microphone, and we are getting a good tonal response. Meantime, Charles and Dave sing closer to the mic — it is a good fit for all of them. I’ve kept all three of them on the same capsule to encourage the natural blending of their voices and harmonic structures.”

Currently, Lady Antebellum, who is a pioneer user and tours with the 9000 series, has been using the Digital 6000 wireless system for its ‘fly dates’ overseas, as well as on award shows such as the CMAs. “When the Digital 6000 came out, it was a gamechanger for us,” commented Pete Bowman, Monitor engineer for Lady Antebellum. “The system has always been solid for us RF-wise, and we never have to worry about drop-outs. Also we love the Dante output command channel. We are pretty reliant on that feature for our full shows.”

Meandering through God’s Country with Sennheiser

One of the most memorable performances of the evening came from country superstar Blake Shelton, who performed his latest chart-topping single, “God’s Country”, which also won Single of the Year. Shelton’s vocals carried the emotional weight of the song, which were captured using a Sennheiser SMK 6000 handheld transmitter, coupled with an MMD 935 capsule. “We’ve been using the Digital 6000 on the road for about three years now and the RF is unbeatable,” observes Brad Baisley, “We also love that capsule for Blake’s voice. He is on wedge monitors, and with wedges, it is a whole different ballgame to get the vocal loud enough without feedback. The MMD 935’s work really well in this regard.”

Meantime, Shelton’s drums were captured using a combination of Sennheiser evolution wired microphones, explains drummer Tracy Broussard: “We use Sennheiser mics on the entire kit, and it has been fundamental to my drum sound. The mic performance provides consistency at both monitors and FOH, and I know whatever sound my drums have, they will be accurately represented in the house and in the broadcast.  At this year’s CMAs, Broussard also used Sennheiser’s new IE 500 Pro in-ear Monitors while on stage: “I want a natural sound, and the IE 500 Pros definitely represent that,” he says. “I also like that they are a low profile in my ear – they are not bulky. Having natural sounding ear monitors like the IE 500 Pro, I can hear my drums exactly as they are meant to be heard so I can actually focus on what I am playing.”

An all-around winning team at the CMAs

Luke Combs picked up Male Vocalist of the Year, and also performed his hit “Beer Never Broke My Heart”, singing through a Sennheiser SKM 6000 transmitter coupled with a Neumann KK 205 capsule and an EM 6000 receiver.  Meantime, continuing with the female-themed show, P!nk and Brandi Carlile made special appearances, each using the SKM 6000 transmitter and EM 6000 receiver. P!nk sang through a Sennheiser MD 9235 capsule, while Carlile sang through a Neumann KK 205 capsule.

“It is always good to do these CMAs,” Brad Baisley concludes. “The whole team is impressive, from the backline, to the RF department, to Sennheiser’s support. In particular, ATK and its staff and engineers are among the best professionals in the business, and this show is always an enjoyable and fun experience.” Baisley — and other artists using Sennheiser gear — have felt the company’s presence throughout the entire duration of the annual award show. “The Sennheiser Artist Relations Team has been here for almost a week and has taken care of everything we needed. We are all Sennheiser for this show and it’s been great.”