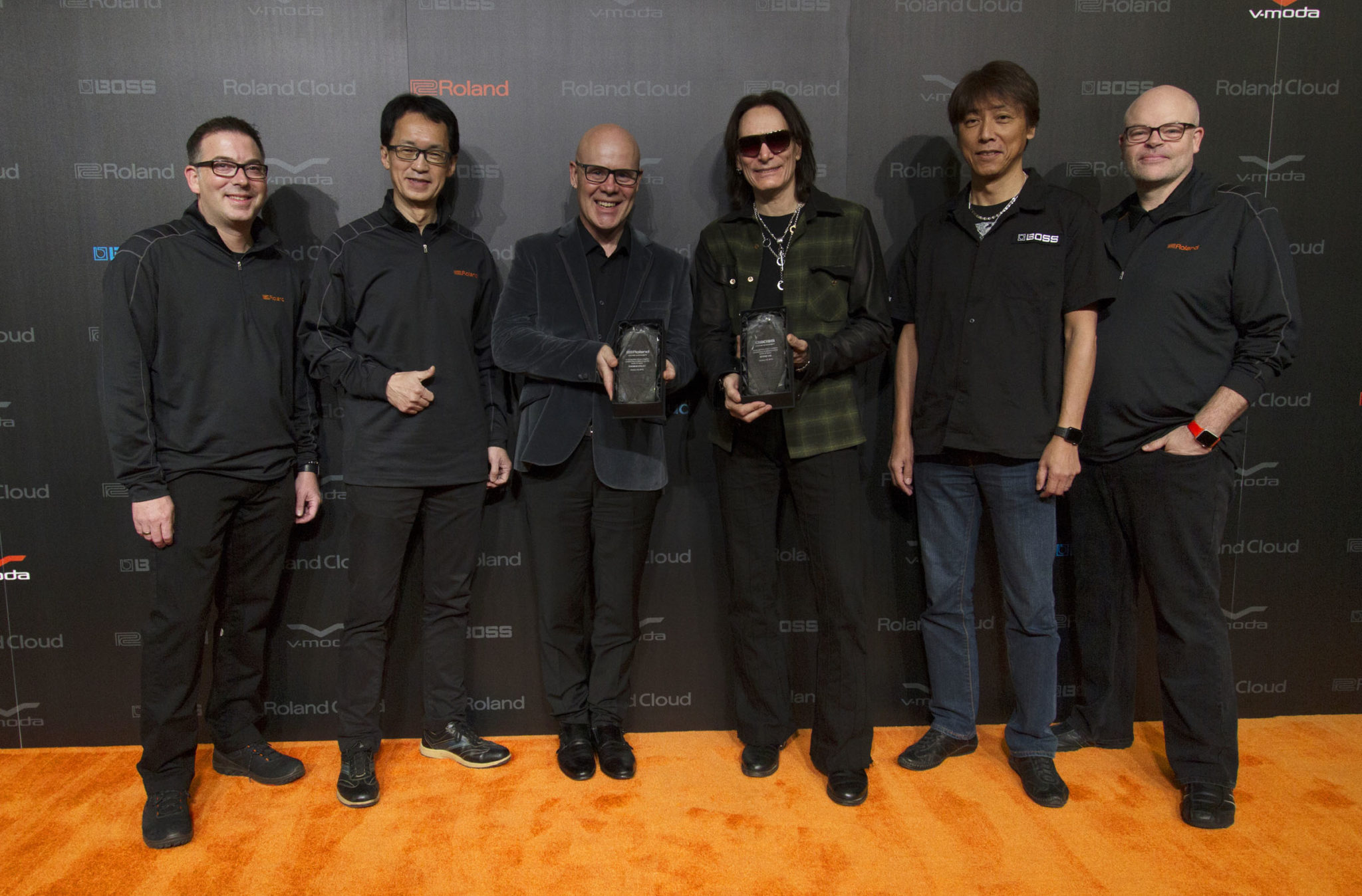 During the 2018 Roland International Press Conference, held Wednesday, January 24, 2018, on the eve of the NAMM Show in Anaheim, California, Roland and BOSS presented their third-annual Lifetime Achievement Awards to synthpop and electronic music pioneer and solo artist Thomas Dolby (Roland), and guitar virtuoso, artist, and producer Steve Vai (BOSS). The Roland/BOSS Lifetime Achievement Awards recognize individuals for their invaluable contributions to the music industry while using Roland and/or BOSS gear throughout their careers. The gala event was attended by artists, musicians, and leading journalists from the music industry.

The evening began with Roland Corporation Vice President of Global Key Influencers Brian Alli presenting guitar icon Steve Vai with the BOSS lifetime achievement award. A three-time GRAMMY® Award winner, Vai has a unique style that defies classification – a sound and aesthetic that has been embraced by fans and peers around the globe. Throughout his career, Vai has sold over 15 million albums and has received many other distinctions including accolades from the press, music schools, and music foundations. Vai’s discography includes numerous album releases, all of which he wrote, produced and engineered himself, and many of which were released by his independent record label, Favored Nations.

Vai commented, “It’s very touching to be given this recognition by BOSS, and I am honored. They have created many innovative designs over the years for crazy guitar players like me to play with… and dance on! Just about anything they came out with I wanted to feel, I wanted to use. It’s uncanny how year after year the company releases great tools for guitar players. Thank you to BOSS and Roland for all of the brilliance you put into your products.”

Next, Roland Corporation Vice President of Global Marketing Paul McCabe presented the Roland Lifetime Achievement Award to Thomas Dolby. During the 1980s, synth innovator Dolby developed fierce technical chops and a new sound that blended his love for technology and his passion for music – a sound that launched his career and helped him rise to international fame during the heyday of MTV. Dolby can also lay claim to being a music technology and software maven, and a published author. He is now a Professor of the Arts at Johns Hopkins University as well.

Dolby took guests on an informative and humorous digital tour of his career using photos, videos, and musical tracks, including the backstory on the original, now-famous sound bite from “She Blinded Me with Science,” followed by a live performance of the song. Dolby shared, “As a Roland aficionado for the last four decades, I am honored to accept this award and thrilled to see Roland’s technologies evolving. One of the new things I love is that Roland Cloud finally stuck all of Roland’s classic synths into soft synths, which is great.”

Alli noted, “Roland and BOSS are honored to recognize Thomas Dolby and Steve Vai. Both artists have styles all their own and have inspired countless other musicians to find their voice.”