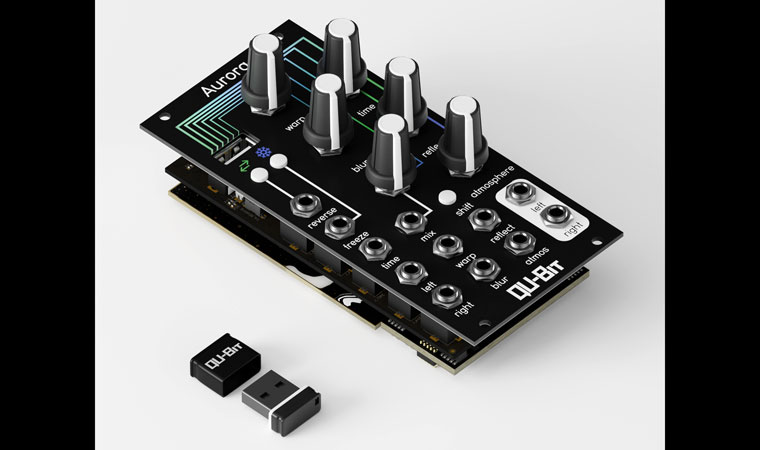 This new Eurorack reverb pushes the boundaries of what a reverb can do – and with excellent results. Be sure to watch the video.

‘Future Coast’ modular synth-maker Qu-Bit Electronix is proud to announce Aurora — a powerful spectral reverb that continues to push the envelope of what is possible in modern synthesis using a potent phase vocoder engine to split the time and frequency domains of incoming audio, allowing for complex spectral manipulations to create beautiful time-stretched tails ad infinitum or smear the frequency domain to conjure up alien timbres that will haunt an ever-expanding space, likely invoking a hunger for exploration like that which was felt when first encountering Eurorack — as of May 10…

Thanks to the extraordinarily powerful prowess of its time- and frequency domain-splitting phase vocoder engine, it is fair to say that Qu-Bit’s hotly-anticipated Aurora introduces new sonic territory to the modular synthesizer landscape — easier said than done in today’s ever-widening Eurorack marketplace. Aurora’s additional onboard sound-shaping tools include a dedicated pitch shifter (warp) — useful for building lush-sounding shimmer reverbs or harmonic textures to accompany a percussive input. Its internal engine includes input reflection (reflect) that morphs between multi-delay time zones; it is perfectly possible to create infinitely long reverbs using even the shortest of sound sources, lending itself to incredible dynamics.

An aurora is a natural electrical phenomenon characterized by the appearance of streamers of reddish or greenish light in the sky — especially near the northern or southern magnetic pole — and caused by the interaction of charged particles from the sun with atoms in the upper atmosphere. Aurora also has an atmosphere affecting its character; clearly more than just a filter, it allows Aurora to actually add harmonic content to the spectral field, fashioning a wide range of possible timbres — and all from a single knob!

Alongside Aurora’s front panel-positioned ‘knobular’ functionality is its immediately available ability to reverse and freeze the input signal, a creative combination that effectively enables Aurora to be a highly-playable reverb — one that encourages use outside of the conventional CV/Gate set-and-forget approach.

All such functions become all the more apparent when taking into account Aurora’s foundational feature — namely, its lovely LED (Light-Emitting Diode) UI (User Interface) artwork. As such, each function has a corresponding LED UI effect — from reverb direction to atmosphere position, plus more besides. Better still, Aurora’s seamless visual feedback helps users to focus on the patch without having to second-guess where Aurora is at.

All well and good, clearly, but configurability extends far beyond Aurora’s fanciful front panel. Put it this way: Aurora uses FFT (Fast Fourier Transformation) to determine its spectral resolution, and users are afforded an ability to cycle through four different settings — each changing Aurora’s sound completely into its own unique variation. Various user spectral resolutions range from smooth, blooming, lush timbres to comb filter-like territory, and even extraterrestrial languages yet to be comprehended!

Configurability can also be further found on Aurora’s (included) USB drive, duly representing an exciting addition to Qu-Bit’s hardware design that has hitherto not made another appearance since the Nebulae v2 granular sampler and DSP (Digital Signal Processing) platform. Ultimately, users can change a multitude of internal settings to tailor Aurora to their needs. Needless to say, Qu-Bit is intent on making more settings available. Accessibility and ease of use also lends the USB drive to facilitate firmware updates and alternative firmwares already hinted at.

As such, Qu-Bit’s latest Eurorack entry undoubtedly upholds its meritorious mantra: to push what is possible in the hardware synthesizer realm. Reality has already seen to it that this philosophy shines through for all to see and hear in the ‘Future Coast’ modular synth-maker’s modules such as the aforesaid Nebulae v2 and the Scanned organic wavetable VCO (Voltage-Controlled Oscillator) based on scanned synthesis, the latter of which had not existed outside of software until Qu-Bit’s innovative implementation was released.

“We wanted to design an audio processor that merged the worlds of spectral processing and traditional reverb algorithms,” asserts Andrew Ikenberry, founder and CEO of Qu-Bit Electronix, ending on a high note: “Our dream was to be able to incorporate techniques such as time stretching, spectral warping, and frequency blurring into a reverb-centric workflow; the result wound up being a new type of audio effect altogether — one which continues to surprise and excite us with each use.”

Ultimately, Aurora has come a long way from its initial announcement at The 2020 NAMM Show — and all for the better. By implementing it with a new look, a powerful sound, and an almost infinite list of possibilities, Qu-Bit has designed and delivered a welcome addition for anyone looking to break the mould and push their sound to the next level — and perhaps even beyond that. After all, it readily pushes the (Eurorack) envelope of what is possible in modern synthesis as a powerful spectral reverb.

Officially released on May 24, 2022, Aurora is available to preorder from Qu-Bit Electronix’s growing global network of distributors (https://www.qubitelectronix.com/distributors) with an MSRP (Manufacturer’s Suggested Retail Price) of $359.00 USD or directly via its dedicated webpage (which includes more in-depth information) here: https://www.qubitelectronix.com/shop/aurora