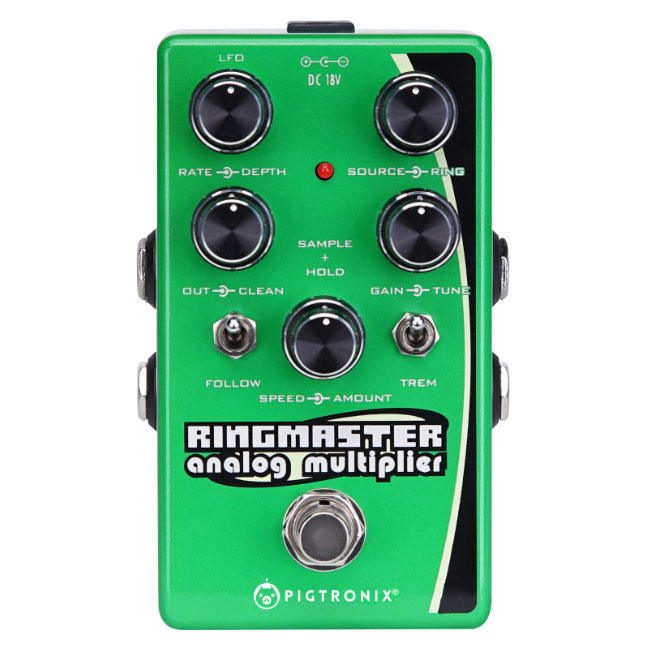 This week at NAMM 2018 in Anaheim, California, Pigtronix will unveil the Ringmaster: an analog ring modulator synth designed to create analog harmonizer and tremolo effects that can be made to follow the notes you play. Expanding on the “Intelligent Ring Mod” found in the original Mothership pedal, Ringmaster adds LFO and Sample + Hold modulation sources, pitch following tremolo and well as wave shaping for both inputs to the analog multiplier circuit at the heart of this uniquely musical ring modulator.

The effect known as ring modulation is created by merging the audio signal from your instrument with an internally generated waveform called the carrier signal. A ring modulator multiplies the notes you play by the value of the carrier signal—and outputs the sum and difference of the frequencies present in each waveform. In the Ringmaster, Pigtronix real-time pitch-tracking technology is used to make the carrier signal follow the notes you play, to produce musical harmonizer effects unlike any other pedal. The Follow function in the Ringmaster can also be switched off to achieve a comprehensive range of atonal, metallic and bell-like tones found in vintage ring modulators.

Ringmaster opens the door to a wide array of unique synthesizer tones by allowing the musician to modify both the input signal and the carrier signal, before they are multiplied together. The Source control blends between clean instrument signal and a pitch-following square wave feeding the multiplier, to increase harmonic content. The Gain control pushes the carrier signal into saturation—producing aggressive, non-linear slewing effects and brass sounds. Further warping and manipulation of the carrier signal is achieved with independent, on-board LFO and Sample + Hold function generators. These dual modulation sources can be used to add several layers of motion to the Ringmaster’s unique selection of harmony, ring-mod and tremolo effects.

In addition to tonal harmonizer and atonal ring modulator sounds, the Ringmaster features a Trem function, which divides the rate of the carrier oscillator down into the LFO range to create tremolo. When combined with the Follow function, the tremolo will speed up as the pitch of the input signal goes up, tracking the notes you play and automatically adjusting the rate of the tremolo instantly. This function works extremely well with monophonic (one note at a time) playing but can also produce dramatic and unconventional amplitude modulation effects when chords are played, essentially confusing the pitch-tracking circuit, which will jump to whatever note is loudest at any given moment.

The Ringmaster allows for an external carrier to be injected into the multiplier, enabling cross-modulation of multiple instruments within a single pedal.

The control voltage coming from the pitch-tracking system, as well as the CV signals coming from the LFO and Sample + Hold function generators can be used to modulate outboard gear via the Ringmaster’s CV output jack. This ¼” CV output can be used as an expression controller for other pedals such as the Pigtronix Mothership 2 pedal, or any synthesizer that allows for external CV control.

Ringmaster is an ideal companion to the Mothership 2, delivering new modulation effects for guitar, bass, and anyone brave enough to plug in to the analog future of Pigtronix!

The Pigtronix Ringmaster will retail for $249 USD. Now taking preorders for April delivery.