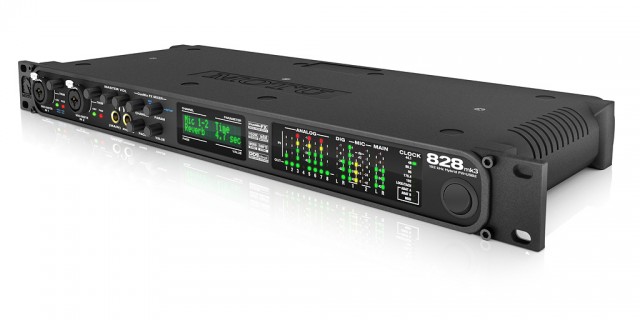 By Michael DiMattio in MOTU, NAMM 2011
No comments

CAMBRIDGE, MA — Friday, January 7, 2011.
In anticipation of its debut at the Winter NAMM 2011 exhibition next week in Anaheim, CA, MOTU has unveiled the 828mk3 Hybrid, an enhanced version of their popular 828 audio interface that now provides flexible connectivity to Mac or Windows computers via Firewire or high-speed USB 2.0.The 828mk3 Hybrid provides professional audio quality at samples rates up to 192 kHz, along with all the audio I/O needed for a personal recording studio, including two mic/instrument “combo jack” inputs, eight line-level analog inputs, ten channels of analog output (with XLR main outs), 16-channels of ADAT optical digital I/O, stereo S/PDIF, and a stereo headphone output.

The rear panel of the 828mk3 Hybrid provides both Firewire A (400 Mbps) and hi-speed USB 2.0 (480 Mbps) ports. Users can connect the 828mk3 Hybrid to their computer using either format for full-featured operation and ultra-low bus latency. The Firewire jacks on the 828mk3 are Type B jacks, but they can be connected to any Firewire port on the computer (Type B, Type A, or miniature Type A) using any standard 9-pin-to-9-pin, 9-pin-to-6-pin, or 9-pin-to-4-pin Firewire cable, respectively.

Other feature updates include computer-controllable pad and 48V phantom power switches for the two mic inputs. The828mk3 Hybrid includes all the features from the earlier award-winning Firewire-only mk3, including:

Availability
The 828mk3 Hybrid will ship in Q1 of 2011 at the same price as the original award-winning 828mk3.