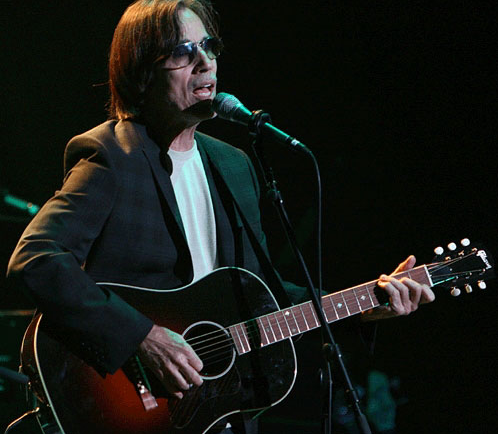 By Michael DiMattio in Gibson, Jackson Browne, NAMM 2011
No comments

Gibson Acoustic will unveil the Jackson Browne Signature acoustic guitar at the NAMM show in Anaheim this month.

A Rock and Roll Hall of Famer and doyen of singer-songwriters, Browne has worked closely with the Gibson Acoustic Master Shop for five years on this exceptional guitar.

Browne, a Gibson collector, has guided the Gibson Montana Acoustic Master Shop in creating a guitar much like the legendary 1930s Roy Smeck model that can deliver a pure traditional acoustic sound as well as a flawless acoustic tone when amplified in a large concert arena.

The Jackson Browne Signature model is handmade and features an innovative acoustic pickup that gives an unparalleled reproduction of the guitar’s sound when amplified, with exceptional gain before feedback capability. It’s also beautiful to look at, with a red spruce top and eco-friendly English walnut on the back and sides.

LOS ANGELES, CA, January 12: On Thursday, January 13, singer-songwriter Jackson Browne will join Gibson Guitar in introducing Gibson Acoustic’s Jackson Browne Signature acoustic guitar during a press event at the 2011 winter NAMM Show (National Association of Music Merchants) in Anaheim, CA. Five years in the making—through a series of evolving prototypes—the handmade instrument was designed and is being produced at the Gibson Montana Acoustic Master Shop in Bozeman, MT. Browne collaborated with master luthier Ren Ferguson and Robi Johns at Gibson Montana throughout the process. It is the first guitar to bear Browne’s name.

“The Gibson team has thoroughly enjoyed creating this outstanding musical instrument with Jackson,” says Henry Juszkiewicz, CEO, Gibson Guitar Corporation. “We are confident that players seeking the very best in tone, whether in the living room, in the studio, or on the stage, will find this a must-have guitar.”

Distinguished by a red spruce top and sustainably-farmed English walnut back and sides, the Jackson Browne Signature model was inspired by Gibson’s legendary 1930s-era Roy Smeck model—several of which are among Browne’s own prized collection of vintage Gibsons—known for its big tone, pure traditional acoustic sound, and flawless projection during concert performance. Responsive and powerful, the “Jackson Browne” has a wide neck, deep round shoulders, and the scale of a classical guitar, with 12 frets to the body. It is as much a fully modern instrument as a vital link to Gibson’s heritage, with innovations including a sophisticated pickup offering unparalleled sound reproduction when amplified, and exceptional gain before feedback capability.

“It has been an extraordinary back and forth process with Gibson creating this guitar,” says Jackson Browne. “As a performer, I’ve learned over the last 20 years what I like, and what works for my music. To use the iconic Roy Smeck model as a starting point—as well as Gibson’s 1994 reissue—and build something that helps me bring my songs to life is really exciting.”

Renowned worldwide for his acoustic performances, Jackson Browne launches his 2011 Solo Acoustic Tour with a February 23 concert in Santa Cruz, CA. The North American itinerary runs through April, with additional dates and regions to be added. For special benefit seating, visit www.guacfund.org .

Jackson Browne has written and performed some of the most literate and moving songs in popular music, and has defined a genre of songwriting charged with honesty, emotion and personal politics. He was inducted into the Rock and Roll Hall of Fame in 2004, and the Songwriter’s Hall of Fame in 2007.