By DGS in
5 comments 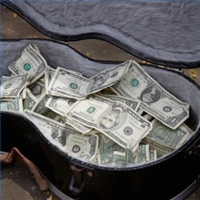 Musicians, singers, and related workers play musical instruments, sing, compose or arrange music, or conduct groups in instrumental or vocal performances. They perform solo or as part of a group, mostly in front of live audiences in nightclubs, concert halls, and theaters. They also perform in recording or production studios for radio, TV, film, or video games. Regardless of the setting, they spend considerable time practicing alone and with their bands, orchestras, or other musical ensembles.

Musicians play one or more musical instruments. Many musicians learn to play several related instruments and can perform equally well in several musical styles. Instrumental musicians, for example, may play in a symphony orchestra, rock group, or jazz combo one night, appear in another ensemble the next, and work in a studio band the following day. Some play a variety of string, brass, woodwind, or percussion instruments or electronic synthesizers.

Singers use their knowledge of voice production, melody, and harmony to interpret music and text. They sing character parts or perform in their own individual styles. Singers often are classified according to their voice range—soprano, contralto, tenor, baritone, or bass—or by the type of music they sing, such as rock, pop, folk, opera, rap, or country.

Music directors and conductors conduct, direct, plan, and lead instrumental or vocal performances by musical groups such as orchestras, choirs, and glee clubs. These leaders audition and select musicians, choose the music most appropriate for their talents and abilities, and direct rehearsals and performances. Choral directors lead choirs and glee clubs, sometimes working with a band or an orchestra conductor. Directors audition and select singers and lead them at rehearsals and performances to achieve harmony, rhythm, tempo, shading, and other desired musical effects.

Composers create original music such as symphonies, operas, sonatas, radio and television jingles, film scores, and popular songs. They transcribe ideas into musical notation, using harmony, rhythm, melody, and tonal structure. Although most composers and songwriters practice their craft on instruments and transcribe the notes with pen and paper, some use computer software to compose and edit their music.

Arrangers transcribe and adapt musical compositions to a particular style for orchestras, bands, choral groups, or individuals. Components of music—including tempo, volume, and the mix of instruments needed—are arranged to express the composer’s message. Although some arrangers write directly into a musical composition, others use computer software to make changes.

Work environment. Musicians typically perform at night and on weekends. They spend much additional time practicing or in rehearsal. Full-time musicians with long-term employment contracts, such as those with symphony orchestras or television and film production companies, enjoy steady work and less travel. Nightclub, solo, or recital musicians frequently travel to perform in a variety of local settings and may tour nationally or internationally. Because many musicians find only part-time or intermittent work and experience unemployment between engagements, they often supplement their income with other types of jobs. The stress of constantly looking for work leads many musicians to accept permanent full-time jobs in other occupations while working part time as musicians.

Most instrumental musicians work closely with a variety of other people, including colleagues, agents, employers, sponsors, and audiences. Although they usually work indoors, some perform outdoors for parades, concerts, and festivals. In some nightclubs and restaurants, smoke and odors may be present and lighting and ventilation may be poor.

Training, Other Qualifications, and Advancement About this section

Long-term on-the-job training is the most common way people learn to become musicians or singers. Aspiring musicians begin studying an instrument at an early age. They may gain valuable experience playing in a school or community band or orchestra or with a group of friends. Singers usually start training when their voices mature. Participation in school musicals or choirs often provides good early training and experience. Composers and music directors usually require a bachelor’s degree in a related field.

Education and training. Musicians need extensive and prolonged training and practice to acquire the skills and knowledge necessary to interpret music at a professional level. Like other artists, musicians and singers continually strive to improve their abilities. Formal training may be obtained through private study with an accomplished musician, in a college or university music program, or in a music conservatory. An audition generally is necessary to qualify for university or conservatory study. The National Association of Schools of Music is made up of 615 accredited college-level programs in music. Courses typically include music theory, music interpretation, composition, conducting, and performance, either with a particular instrument or a voice performance. Music directors, composers, conductors, and arrangers need considerable related work experience or advanced training in these subjects.

A master’s or doctoral degree usually is required to teach advanced music courses in colleges and universities; a bachelor’s degree may be sufficient to teach basic courses. A degree in music education qualifies graduates for a State certificate to teach music in public elementary or secondary schools. (Information related to teachers—postsecondary and teachers—kindergarten, elementary, middle, and secondary can be found elsewhere in the Handbook.) Musicians who do not meet public school music education requirements may teach in private schools and recreation associations or instruct individual students in private sessions.

Other qualifications. Musicians must be knowledgeable about a broad range of musical styles. Having a broader range of interest, knowledge, and training can help expand employment opportunities and musical abilities. Voice training and private instrumental lessons, especially when taken at a young age, also help develop technique and enhance one’s performance.

Young persons considering careers in music should have musical talent, versatility, creativity, poise, and good stage presence. Self-discipline is vital because producing a quality performance on a consistent basis requires constant study and practice. Musicians who play in concerts or in nightclubs and those who tour must have physical stamina to endure frequent travel and an irregular performance schedule. Musicians and singers also must be prepared to face the anxiety of intermittent employment and of rejection when auditioning for work.

Earnings About this section

For self-employed musicians and singers, earnings typically reflect the number of jobs a freelance musician or singer played or the number of hours and weeks of contract work, in addition to a performer’s professional reputation and setting. Performers who can fill large concert halls, arenas, or outdoor stadiums generally command higher pay than those who perform in local clubs. Soloists or headliners usually receive higher earnings than band members or opening acts. The most successful musicians earn performance or recording fees that far exceed the median earnings.

The American Federation of Musicians negotiates minimum contracts for major orchestras during the performing season. Each orchestra works out a separate contract with its local union, but individual musicians may negotiate higher salaries. In regional orchestras, minimum salaries often are less because fewer performances are scheduled. Regional orchestra musicians frequently are paid for their services without any guarantee of future employment. Community orchestras often have limited funding and offer salaries that are much lower for seasons of shorter duration.

Although musicians employed by some symphony orchestras work under master wage agreements, which guarantee a season’s work up to 52 weeks, many other musicians face relatively long periods of unemployment between jobs. Even when employed, many musicians and singers work part time in unrelated occupations. Thus, their earnings for music usually are lower than earnings in many other occupations. Moreover, because they may not work steadily for one employer, some performers cannot qualify for unemployment compensation and few have typical benefits such as sick leave or paid vacations. For these reasons, many musicians give private lessons or take jobs unrelated to music to supplement their earnings as performers.