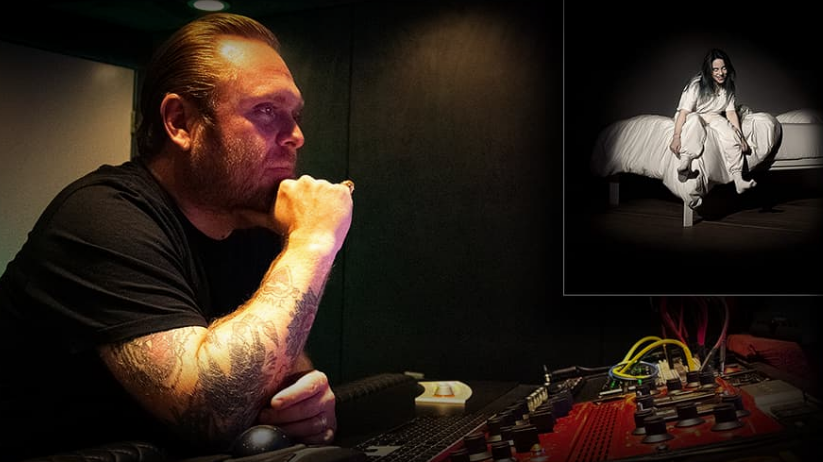 Engineer Rob Kinelski has mixed chart-toppers for Ariana Grande, Beyoncé, and many more. But it’s his work with Billie Eilish that has garnered him five Grammys, including “Record of the Year” and “Album of the Year.”

Billie Eilish and her producer/co-writer/brother Finneas O’Connell began turning the world upside down in 2015 with the track “Ocean Eyes,” recorded in a small LA bedroom when Billie was just 14 years old. Four years later, the duo’s debut full-length album would go on to amass five hit singles including the #1 Billboard smash “Bad Guy.”

Eilish’s haunting, languid vocal performances — harkening Billie Holiday, Chet Baker, and Amy Winehouse — owe in no small part to the production prowess of mix engineer Rob Kinelski. We caught up with him at his studio in Los Angeles to learn how he used a single UAD Satellite and stockpile of UAD plug-ins to help craft melancholic, hook‑filled hits.

Tell me how you, Billie, and Finneas work together.

Finn just has great ears. He knows how to record with barely any training, and the way he captures and manipulates sounds is really thoughtful. Billie is well-tuned to his process as well.

Billie and Finn’s stems are pretty dialed by the time they get to me. Everything is pre-compressed and pre-panned, so I load it into Pro Tools and filter tracks through my routing and summing system. I might do a few surgical things, then drop anything that isn’t needed once I have a template.

You said that you’re almost embarrassed by how little you need to do to their mixes, but seeing your routing and buses, that seems like an understatement.

Most of the natural magic is on their end — my job is to help them finish, keep things cohesive, and address any problems that may arise. Sometimes that means not fixing the problems, if you know what I mean. Sometimes you have to let that energy breathe.

The question I ask myself is, “How can I be of service to the songs?” I do everything I can to make what they create even better, but it’s not about putting my own stamp on things. That’s not my role. I know mixers who do the opposite, but that’s not my approach.

You’ve been a Universal Audio devotee for quite some time. What drew you to UAD plug-ins?

We’re spoiled now, but I remember when UAD plug-ins first came around, everyone was buzzing about the idea that UA had a Fairchild plug-in that actually sounded like a Fairchild. I recall being in a studio, A/B’ing the UAD version against a hardware unit and all of us being like, “Holy shit — it’s almost identical.” We did a blindfold test and a lot of people picked the UAD plug-in over the real one!

So from the get-go, UAD plug-ins have been a part of my workflow. They’ve made mixing in-the-box not such a “bad word” anymore.

Like a lot of people, I’m impressed with the space and ambience in the mixes. The tracks are dry, but there’s still this openness and stereo width.

When it comes to the soundscapes, imaging, and reverb and delay on Billie’s records, you’ve got to credit Finn for most of it. But for example, if something is fairly wide in their mix, I might just push it out a little more, or make things the tiniest bit out-of-phase — tricks to expand the stereo field and make the mix more interesting — or even a little weird.

What plug-ins do you use to add that space?

Another favorite of mine is the Sonnox Oxford Inflator, which I use on virtually all my background vocals. I don’t hit it too hard, and it’s pretty subtle, but it adds harmonic color to backing vocals and makes them pop and open up.

Those stacked background vocals are a notable feature of Billie’s music. It sounds like an effect in and of itself. What was the inspiration?

For me, the goal is to create movement, and avoid letting things just sit for too long. If you mix modern music too safe, it can come out boring and linear. You don’t ever want your mix to come out sounding like a bunch of repeating loops. Stuff needs to happen. Making those background vocals really pronounced is just one way to do that.

I engineered Beyonce’s B’Day album, and I clearly remember how the great Jason Goldstein made the background vocals sound massive. They just jumped out of the speakers.

And it works with other genres too. I’ve worked with Grammy‑winning songwriters like Andrea Martin and Makeba Riddick, and we did similar things with stacked background vocals to create interest in the mix.

I understand you’re fond of the Ampex ATR-102 Mastering Tape plug-in. What are your settings?

And what’s this about using the Thermionic Culture Vulture on the mix bus? Bold stroke!

Oh, yeah. That’s a go-to! Here’s how it went down. I was working on a mix and just thought, “How can I get more color on this?” So I impulsively threw the Culture Vulture in there on its default setting. Then I bypassed it. Then I turned it on again. Then I bypassed it . . . [Laughs]. Finally, I turned it on again and I’ve just left it there ever since!

I really wish I could give you some intelligent, well-thought-out explanation about what it’s doing to the odd harmonics or whatever, but I can’t. I just knew it sounded good, and part of me was like, “I bet nobody’s really doing that.”

Is your mix bus chain fully in-the-box, or do you weave in hardware processors?

It’s changed quite a bit, but here’s the basic idea. I start with the Ampex ATR-102 Mastering Tape plug-in, then go into the Thermionic Culture Vulture plug-in. From there, I used to feed into the Dangerous BAX EQ, but I’ll confess: I’ve switched my mix bus EQ to the Fearn VT-5 EQ Dual-Channel outboard EQ. I mean, it costs over $10,000, so it’s not like I’m going to let it sit around, right?

Let’s talk about guitar tones. What does a typical plug-in chain look like?

I use the Harrison 32C SE Channel EQ on almost all my electric guitars. It allows me to boost the midrange without the harshness that often goes along with it. For acoustic guitars, I always seem to turn to the Teletronix LA-3A Classic Audio Leveler plug-in to smooth out transients and help them sit in the mix.

Do you have any go-to plug-ins for drums?

Lately, I’ve been using the Empirical Labs EL8 Distressor for live drums. What I love about that plug-in is the Mix function, which works like a good parallel compressor, but without any worries about phasing.

How do you keep Billie’s vocals so present, despite her ‘whispery’ delivery?

I wasn’t feeling the way most modern in-the-box vocals were sounding. I wanted Billie’s voice to sound clear, present, and exciting. So what would I use to do that in a traditional studio? A Neve 1073!

With the Neve 1073 Preamp and EQ plug-in, I typically roll off a little low-end and maybe bump up some low mids around 200Hz. Then I’ll use the High-Band Shelf knob to play with the brightness.

There is surely some magic going on with Billie and Finneas’ music. What do you think they’ve tapped into?

I think the magic that’s going on starts with the two of them being entirely authentic to themselves. They don’t think about genre, or even care about it really. And I think that’s true for a lot of their generation. They just don’t care about those divisions. Since I love making albums, I used to get upset by the notion that the “playlist is killing the album.” Even if that’s true, the playlist might be killing the genre — and maybe that’s a good thing!