John Petrucci and Dream Theater fans in New York, Chicago and San Francisco are about to get a real treat.

As part of the official ‘The Dreamscape’ launch, John will be visiting three Guitar Center stores in New York (30 March), Chicago (31 March) and San Francisco (1 April), introducing Dreamscape in the US – a unique chance for Petrucci fans to meet their idol off-stage. 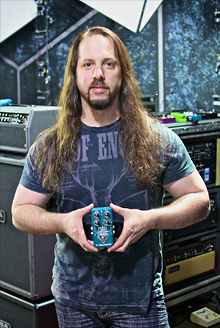 John has been a long-time TC effects user, and in particular, the legendary SCF (Stereo Chorus Flanger) has one of his favorite pedals for ages. John was also one of the first artists to join TC’s revolutionary TonePrint concept. In total, he created 5 personal TonePrints in early 2011 – two for Corona Chorus, two for Shaker Vibrato and one for Vortex Flanger.

One of John’s goals was to create an updated version of his beloved SCF pedal – one that sounded as great, but at the same time taking advantage of new features like True Bypass as well as overall better parts and even more headroom. When designing his TonePrints, John loved having access to all effect parameters so much that he instantly agreed todevelop a signature pedal together with TC – one that was based on his own TonePrints.

Basically, John wanted to gather all of his TonePrints in a single pedal though his original TonePrints were for three different pedals. Therefore, his new signature pedal contains no less than three mind-blowing modulation effects that have been painstakingly tailored with an eye on even the tiniest detail by the master himself. To take this pedal over the top, John even created a brand new TonePrint for Vortex Flanger taking the total amount of custom-tweaked tones up to six – 2 x chorus, 2 x flanger and 2 x Vibrato.