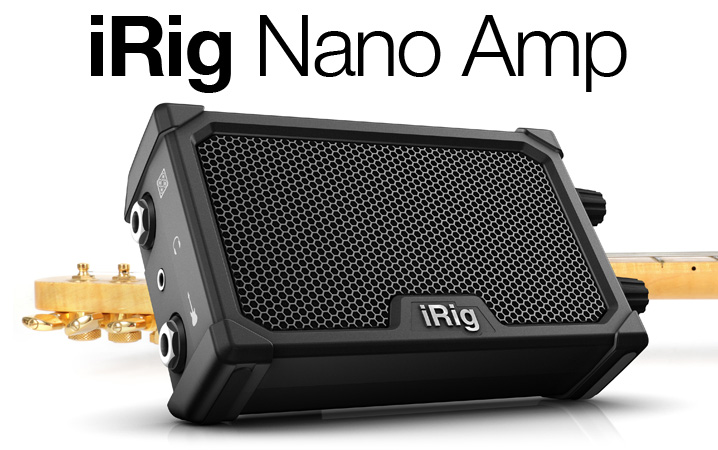 iRig Nano Amp is an ultra-portable, battery-powered micro guitar amplifier and interface for iPhone and iPad that gives guitar and bass players access to unlimited tones in a compact, self-contained 3-watt amplifier that can drive up to a 4×12″ guitar cab

IK Multimedia once again redefines a product category for guitarists with the newly released iRig Nano Amp – the versatile micro amp with a built-in iOS interface. iRig Nano Amp gives players both a standalone portable guitar amplifier PLUS an interface that lets them plug their guitar into an iPhone or iPad and use AmpliTube for iOS to access an unlimited and inspirational world of guitar tones on the go. iRig Nano Amp is available now from IK Multimedia and music and electronics retailers around the world.

The first micro amp and interface for mobile guitarists

iRig Nano Amp is a super-compact, battery-powered, self-contained micro amp and interface for iOS that players can use by itself, with headphones or even an external speaker cabinet – this power-packed amazing little amp can drive up to a 4×12″ guitar cab! But what makes it more versatile than any other micro amp available is that it features the iRig circuitry so that guitarists can plug their iPhone or iPad into it with the included TRRS cable and tap into the limitless world of AmpliTube guitar tone and more.

What makes iRig Nano Amp so unique is that it operates in two different modes: AMP & DEVICE. In AMP mode it’s a standalone amp for impromptu practice anywhere. In DEVICE mode it’s used as an interface and amp for an iOS device. Plus, in both modes players can use the built-in speaker or hook up an external speaker cabinet – up to a 4×12″ cab – for more volume and tonal clarity.

iRig Nano Amp operates as a straight-up guitar amp and features a British tone stack circuit with tone and volume controls for practice on the go. Players simply plug their guitar into the 1/4″ guitar input, adjust the volume and gain settings, select the output type NORMAL/BRIGHT and rock out. The British tone circuit delivers sparkling clean tones at lower gain settings and a cascading wave of overdrive when cranked to the upper limits.

iRig Nano Amp is also an interface and monitor for an iOS device thanks to its integrated iRig circuit. Players use the included TRRS cable to hook up iRig Nano Amp in DEVICE mode to an iPhone or iPad and plug in to the amazing toneful world of AmpliTube to play, practice and record anywhere, any time. This is great for grabbing ideas in AmpliTube’s 4-track looper or recording studio, or just practicing with the models of AmpliTube gear and more. When used in DEVICE mode, the internal tone stack circuit is bypassed and the volume knob controls the overall output of the amp. Headphones can be used in DEVICE mode for monitoring the processed signal coming from the device.

iRig Nano Amp features a 1/4″ speaker out jack that can drive up to a 4×12″ cabinet. Once plugged in, guitarists will be floored by the volume and tonal definition that iRig Nano Amp provides. An external cabinet can be used in both AMP and DEVICE modes providing the most flexibility of any micro amp available.

iRig Nano Amp is compact – it’s just slightly larger than an iPhone and features a handy “kickstand” for tilting back the unit for better monitoring. Inside, iRig Nano Amp powers a 3″ speaker with a 3-watt class A/B power amp. It features a 1/4″ guitar input, a 1/4″ speaker output, an 1/8″ headphone jack, is powered by 3 AA batteries (included) and comes complete with a TRRS cable for connection to an iOS device. iRig Nano Amp can be used in 3 output monitoring options – in DEVICE mode with headphones for private practice, or with the internal speaker active or external speaker cabinet connected to the 1/4″ speaker out in both DEVICE or AMP modes. 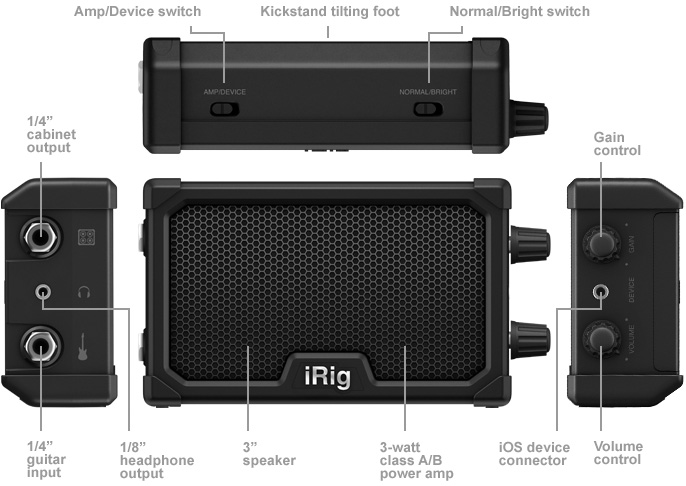 An expandable universe of tone

Since iRig Nano Amp lets players plug into their iPhone or iPad, they’ll have access to AmpliTube for iOS – the largest and expandable collection of virtual gear available from the world’s top manufacturers. Available models include amps and stomps from Fender®, Ampeg®, MESA/Boogie®, Orange® and signature artists like Slash, Jimi Hendrix™ and more. With iRig Nano Amp and AmpliTube, a complete guitar rig is always close at hand.