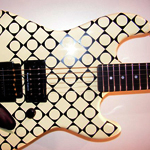 Fullerton, Calif., January 14, 2010 – G&L Musical Instruments is pleased to introduce the new Rampage Jerry Cantrell “Blue Dress” guitar “Jerry Cantrell Signature Model” (MSRP $6,600) at the NAMM tradeshow (booth #4690). Available in March, the limited edition guitar features graphics based on those Cantrell applied to his favorite 1984 G&L Rampage, which has been a part of Cantrell’s signature sound for his entire professional career.

Cantrell’s newest incarnation features a soft maple body, quarter-sawn maple/ebony neck, Floyd Rose locking nut, Kahler 2230 brass tremolo and is available in the original ivory or black finishes and sports a single humbucker hand-wound by Motor City Pickups. The “Blue Dress” Limited Edition is visually distinguished by body graphics designed to Cantrell’s exact specifications, including the iconic image of the “Blue Dress” girl which was originally featured in a vintage issue of “Oui” magazine, plus a specially numbered neck plate laser-etched with the “Blue Dress” girl. Cantrell will personally autograph the back side of the headstock of every “Blue Dress” guitar.

Jerry Cantrell is a guitarist, singer, and songwriter best known for his work with Alice in Chains, who first made a name for themselves with the hit song “Man in the Box”. Alice in Chains reemerged in 2009 with a new singer, William DuVall, and have released their first full-length studio album in 14 years, called Black Gives Way to Blue.

On Friday, January 15, Jerry Cantrell will be available at 3:00 PM at the G&L booth (#4690 Hall “C”). Also available for viewing will be Cantrell’s original G&L Rampage, which will be on display next to the Rampage Jerry Cantrell “Blue Dress”.