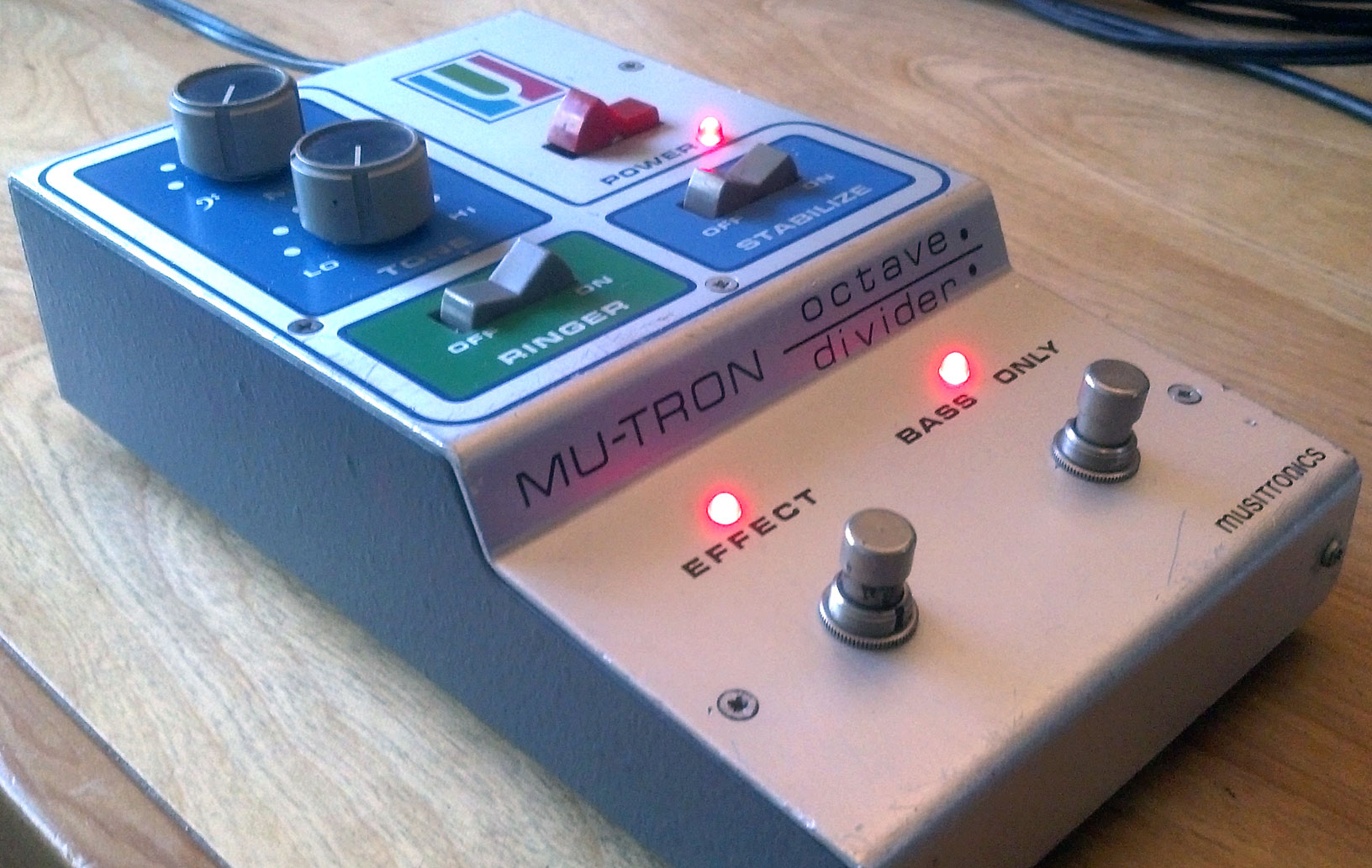 Mutron pedals were used by Jerry Garcia of the Greatful Dead, Larry Graham of Sly and the Family Stone, and many other artists in the late 70s and early 80s. As an octave divider there are many modern pedals by EBS, Boss, Dunlop, Ampeg and others that have better tracking and up and down octave features. But none can replicate the signature sound that the Mu-tron Octave Divider creates with the built in Green Ringer circuit. The Ringer sounds excellent on bass with heaps of growling and distorted overtones for added dimension to your sound. The Green Ringer circuit was used “so it would produce a fairly reliable octave above as well as an octave below.” The Ringer is a Dan Armstrong circuit that was manufactured by Musitronics in the early 70s along with other Dan Armstrong US Made effects pedals. The Mu-Tron “OD” pedal is so sought after by current day bassists that a cottage industry has sprung up to clone it as a new product and refurbish what units may still exist from the 70s.

The Green Ringer Story From danarmstrong.org

According to Dan, “If I remember correctly when I left Ampeg in ’71 one of their engineers gave me an Ampeg Scrambler as a going away gift. I can’t remember but I think it may have been a prototype or something they had lying around“. The Scrambler, according to Dan was “somewhat like a ring modulator but not very well designed and as a result they really didn’t sell very many. Back in those days everyone was selling fuzz units of one kind or another. Ampeg tried to market the Scrambler as a fuzz unit and while it would kind of distort it would actually do a lot of other things better.”

Dan told George about the ‘Scrambler’ and was surprised to learn that George already knew everything about the device and even built one for Dan, who went on to say “Together we changed it some, tweaked it until we got it to play an octave up, and like two octaves down as well as other neat sounds – all depending on what note was originally played“.

The last thing they did was to fit it all in a small green box. Dan continued, saying “we somehow fit it all into a box that was small enough to plug into a guitar and not detract the player too much. We wanted it so that when the effect is called for, you just reach down and flick a switch. Eventually we named the it the ‘Green Ringer® and went on to build more devices.”

According to Dan, “Ringer is the actual effect, while Green came from the green colored box that we put it in, also I never really told this to anyone before – but green was also my hope of us making some money on the unit. Ironic though, as we really didn’t make that much off it, or any other devices in the line.”

The Mutron pedals were extremely well built and housed in a sturdy aluminum case that could stand up to a lot of abuse. The one drawback to the design was the use of plastic rocker switches that are difficult to operate with your feet.