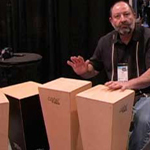 By 7stjames in Cajón, conga, fat congas, NAMM 2010
One comment

These were totally unexpected. I am not a drummer, but I love to bang around on a kit. At first glance these drums look like adult toys or hippie furniture – in fact they finely crafted professional percussion instruments. I was invited to sit on one and “play”. Like a traditional conga the play

ing surface, though made of wood, is very responsive and delivers different tones based on attack and strike location. Tom Hollow demoed a set for me. Later as I walked the NAMM show isles I noticed several booths using Fat Congas in their musical combos. They sound great!

Product is made by: fatcongas.com

“I purchased this drum a little while ago in replacement of a Meinl Bass Pedal Cajón I had previously. Upon realizing how much better the Fat Congas drum sounded compared to the Meinl (not to mention durability), I made the swap.

Traditionally, guitar strings are used on Flamenco Cajón drums, giving them the nice snare effect the drums are known for. What’s unique about this particular drum is that Fat Congas has made four strings which are of a virtually indestructible material (guitar strings have been known to break). The strings are also tunable with a standard drum key–making it very easy to tune.

The only downside I find is that you have to retune them more often–but considering it takes about a minute or two to properly tune the snares, this isn’t a big task at all.

The drum has two playing surfaces–one with a thinner playing surface for the Flamenco sound with strings, and the other being a thicker piece of wood, the sound being a traditional Peruvian sound (reminiscent of conga). Both surfaces provide nice, deep low ends, and very crisp highs for slaps and open tones.

The Flamenco side also features unique, non-screwed corners at the top left and right at the drum. Striking this section with your finger gives you another high end tone–great for fills and rolls.

Brushwork sounds great on this drum as well.

Highly recommended for anyone who wants to take Cajón seriously.”