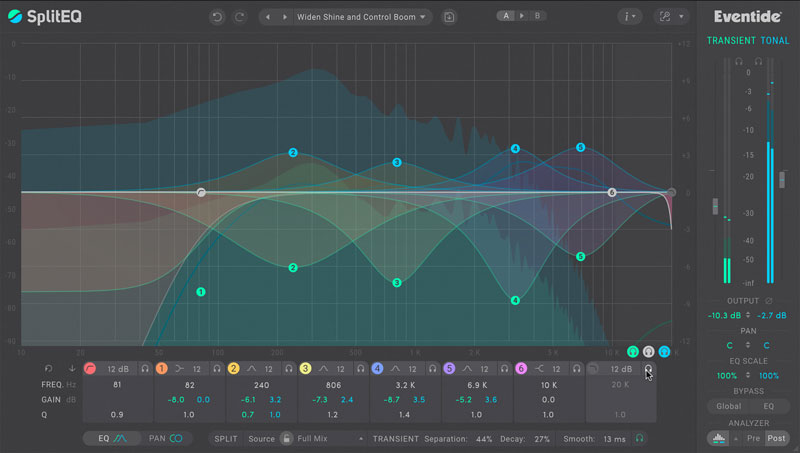 Eventide Ushers in a New Era of Equalization with SplitEQ™

Eventide has released SplitEQ, an advanced equalization plug-in featuring our patented Structural Split technology. The culmination of a multi-year effort, SplitEQ works in a fundamentally different way from traditional EQs. It’s a new approach for corrective and creative rebalancing, enhancing, repairing, and widening any musical signal or other audio source.

SplitEQ is a parametric EQ with eight bands of precise, musical filters. What’s new and different is Eventide’s powerful Structural Split engine which divides the incoming audio into separate Transient and Tonal streams that feed the eight bands. This approach makes common EQ problems easy to solve even in a complex mix and opens up exciting new musical possibilities.

“We’re incredibly proud of what our developers have accomplished. They’ve built on the Structural Split technology at the heart of our earlier plug-in, Physion, to do something truly groundbreaking: SplitEQ is a fundamentally new type of musical tool.” said Eventide’s founder, Richard Factor.

SplitEQ takes the sound of structure into account. It splits any sound into two streams, mimicking human perception of its tonal and transient elements. After that, you can cut or boost only that part of the sound on which you’re focused. SplitEQ is not just a corrective tool. It is also a new type of creative tool for adding dimension to mixes through its independent Left/Right and Mid/Side panning options.

As one of SplitEQ’s developers, Peter McCulloch, put it: “We can all hear the transient and tonal parts of a sound, shouldn’t our EQs?”

Whether you’re working on individual tracks, a full mix, or cleaning up a two-track loop, you’ll find SplitEQ to be an inspiring and powerful tool that allows you to approach material in a new, musically, and sonically meaningful way.

SplitEQ is available for Mac and PC in VST, AAX, and AU formats for an introductory price of $99 (reg. $179) from Eventide and authorized dealers worldwide. Visit eventideaudio.com/SplitEQ for more information and to request a free 30-day demo.