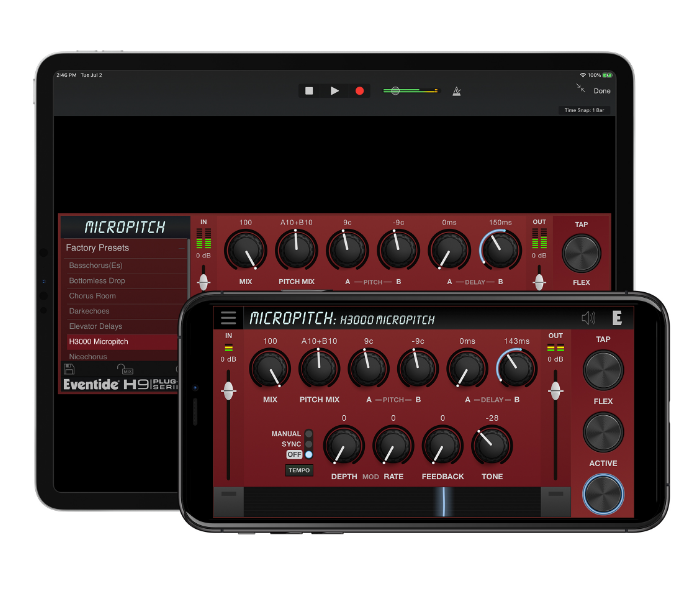 Building on the legacy of its H910 Harmonizer®, the world’s first commercially available digital audio effects unit, Eventide brings Harmonizer tech into your DAW as a plugin.

Mike’s Notes: This plugin is the real deal. The purchase price of the H910, which this unit is derived from, was $1600 in 1975. Now you can have all that sonic glory in your DAW for a mere pittance. The guitar player in our band bought one in the 70s and we ended up using it to great “effect” on everything both live and in the studio. Easiest way to thicken a vocal, guitar, bass and wonderful on drum solos. Love to have that sound back.

MicroPitch is the latest incarnation of an iconic effect originated by Eventide in the 1970s. With each generation, Eventide has added refined, enhanced and built on its legendary predecessors. MicroPitch is a fine-resolution pitch shifter for subtle tone fattening, through offering dramatic slap back effects via delays. MicroPitch goes above and beyond the run-of-mill stereo spread effects of simple micropitch plugins by allowing users to mix in detuned and delayed versions of a source, creating depth and dimensions not possible before. Its expanded controls make possible deep pitch dives, haunting echoes, and pristine chorusing effects.

Like all H9 series plug-ins, MicroPitch is designed to ‘play’. The dynamic and fluid Ribbon control can add a bit of ‘life’ whie mixing by sweeping MicroPitch’s effect between two completely different settings of any combination of controls, such as turning sweetening shifts into a delay-throw and back, or changing delays from dark to bright for transitional effects. Desktop users can plug in a MIDI keyboard and gain control of the Ribbon via the mod wheel for tactile control of this intuitive performance macro.

The plug-in has been enhanced for experimentation and live performance and fine-tuned for desktop, laptop or iPad. It also promises much more tweak-ability than more simple pitch shifting plugins and includes a host of Presets based on iconic uses of the MicroPitch effect. The intuitive UI’s Tone, Modulation, and Feedback controls provide territory for ear-catching production techniques. Unleashing the full range of MicroPitch’s parameters lets users discover rich repeating delays, thick modulations, and Tempo-synced special effects.

MicroPitch features two voices of pitch shifting, one from unison to -50 cents, the other from unison to +50 cents, each with up to 2 seconds of delay. The plug-in can produce a classic stereo-spreading effect, a chorusing effect on each voice by means of Modulation Depth and Rate controls, slapback effects by means of longer delay times and can create pitch dive or rise effects by Feedback adjustment. The Mix Lock toggle lets users maintain a wet-dry mix constant while scrolling through the rich complement of presets while the Pitch Mix allow for layering the two voices by setting the balance between each shifted delay. The Tempo function allows for for synchronized and unique delay effects

Joining the iOS version of the app, which works as a standalone app, AudioUnit v3 plug-in, or Inter-App Audio effect, MicroPitch for Mac and PC supports VST, AAX, and AU plug-in protocols for compatibility with every DAW. Priced at an MSRP of $99., MicroPitch is available for an introductory price of $39. through May 31st .