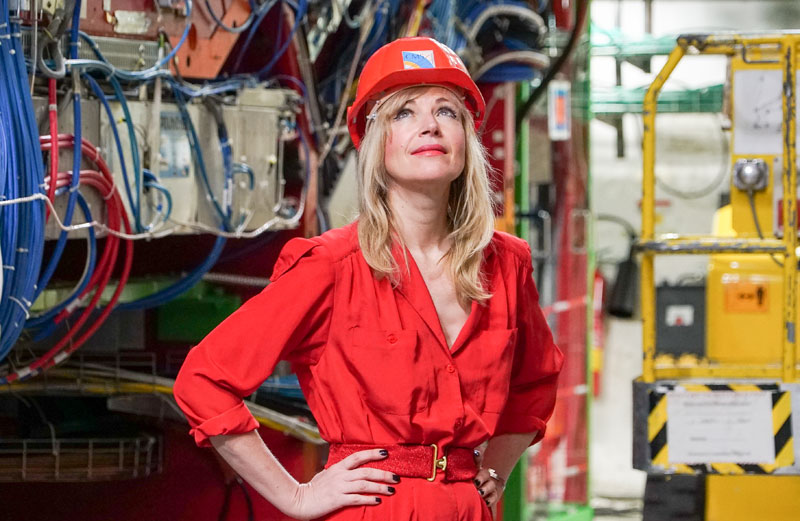 Without actually making the trip 30+ stories underground, it might not be possible to get a feel for just how thrilling it is to visit CERN, the European Organization for Nuclear Research, located just outside of Geneva, Switzerland— but “Electronic Storm” gets you closer.

In this new short film, accomplished filmmaker Marie Losier and master thereminist Dorit Chrysler build a sci-fi-inspired world at the intersection of musical exploration and scientific discovery. Set to an original composition that Chrysler crafts throughout the piece using Moog Music’s new Claravox Centennial theremin— a mystifying musical instrument that is played without physical contact—Losier artfully captures the futuristic world of the world-renowned particle physics facility.

“It was a uniquely inspiring location,” Chrysler says of CERN. “An international cathedral of science following no commercial purpose but pure creative experimenting on a scale so grand that I had never witnessed before. It immediately inspired the idea to set a film there… putting this location to sound and to celebrate the beginnings of electronic music, a colossal moment of invention… the centennial of the theremin.”

Behind the Creation of “Electric Storm”

“I had recently seen a remastered version of Metropolis by Fritz Lang and its industrial sceneries evoked CERN for me, ” Chrysler recalls.

The Austrian theremin virtuosa had previously composed a theremin-centric score for a remake of Lang’s other famous film, M, and was familiar with his dramatic style. So descending into the cavernous spaces of CERN with French filmmaker Marie Losier was both a natural fit for her new video and the realization of a collaboration she’d been hoping to do for quite a while.

“I collaborated with CERN’s science outreach program for many years, and it was a long time fantasy of mine to be able to actually shoot there. It was a complete privilege to have access to such a unique location.”

The Compact Muon Solenoid (CMS) is one of seven ongoing experiments inside CERN’s Large Hadron Collider (LHC) that try to snatch the elementary particles of the universe from particle beams hurtling beneath the surface of the Earth at 99.9999% of the speed of light. Around 150,000 people visit CERN, but nothing really prepares you for witnessing these modern marvels of science in person.

“For most people it’s just a wonderful moment to finally get to see something they may have heard about or read about or seen on the television,” says CERN’s Connie Potter. “But it doesn’t take away from the sense of awe that they have when they see the big underground machines—they are real feats of modern engineering.”

Potter worked with Chrysler and her team on getting them access to CERN’s techno underworld even while everything above ground was grinding to a halt.

“Dr. Austin Ball, who’s the Technical Coordinator of the CMS experiment, gave her even more access (than expected),” says Potter. “Dorit was able to get down onto the floor of the cavern, so she could film looking up and really see the size of the detector. They had pretty exceptional access, even though it was a weekend that was pretty fraught with worry and anxiety as the world was closing its borders.”

Reduced to a crew of three that included Chrysler herself, filmmaker Marie Losier had to improvise a good amount of the shoot because of the COVID-19 pandemic. Lightning gear, sound equipment, and extra helping hands were simply no longer an option.

“I had taken all the audio equipment there so we could do things in accordance to the music,” says filmmaker Marie Losier. “But since we suddenly had a catastrophe of having to do a one day shoot rather than three days, I just put it aside and tried to memorize the rhythm of the film.”

Losier, who’s worked with cutting-edge musicians like Genesis P-Orridge, brought a 16mm Swiss Bolex vintage camera into CERN, and turned the disadvantage of not being able to sync sound into the freedom of experimentation.

“It’s a camera that I really cherish because it separates the sound from the image, which really allowed me to think about editing and to think about sound as a strong property to invent worlds. I was discovering the space, which I had not seen in person. (And) according to the spaces, I did many experiments with Dorit. I didn’t realize how large these machines were and how tiny Dorit would be next to them, so I had to lie down on the ground and capture her which really was not easy to do since we were on our own,” Losier recalls.

Despite the intense challenges and worry, Chrysler loved the results that she and Losier were able to achieve.

“I thought her craft and emotional approach to objects would stand (as an) interesting contrast to the technical cold and industrial environment of CERN,” Chrysler said of her collaborator. One significant piece of gear they did have on board was the Moog Claravox Centennial.

Mike’s Notes:
A captivating melody and “groovy” video definitely worth the watch – and listen. Dorit Chrysler, an Austrian born thereminist, composer, producer, and singer, shows off her mastery of the theramin. She is the co-founder of the New York Theremin Society and started America’s first school for theremin, “KidCoolThereminSchool”.