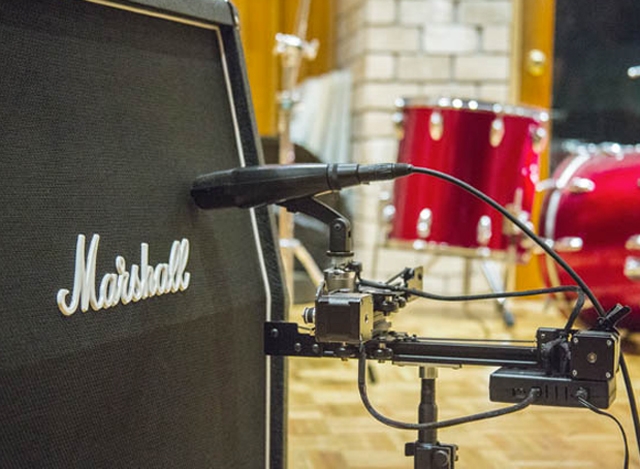 DynaMount has combined an XY plotter with an app to provide a new level of precision to producers and sound engineers for placing mics in the sweet spot in the recording studio. This product will remove the tedium and speed up workflows for one of the most mundane and frustrating tasks in the recording process.

X1-R Dual-Axis + 360° Rotation
With its dual-axis movement and rotation capabilities, the X1-R provides virtually unlimited tonal options and is incredibly versatile. Not only can it be used to position a mic for tone both laterally and on/off axis, the second axis can also be used for phase alignment when multiple mics are being used on one source. It is no surprise that the X1-R has been the go-to choice of top producers, engineers and artists in professional and project studios around the world for finding the sweetspot on guitar cabinets, bass cabinets, acoustic guitars, overheads, kick drums, pianos, cellos and anything else where mic placement matters.

X1 Dual-Axis
When on/off axis rotation isn’t necessary the X1 provides a great alternative to the X1-R. It offers the same dual axis flexibility but with a smaller price tag. Not only can it be used to position a mic for tone laterally the second axis can also be used for phase alignment when multiple mics are being used on one source. It is a great for finding the sweetspot on guitar cabinets, bass cabinets, acoustic guitars, overheads, kick drums, pianos, cellos and anything else where mic placement matters.

V1-R Single Axis + 360° Rotation
With a single axis and rotation the V1-R is a powerful tone finding tool with a much smaller footprint than our X models. It is incredibly useful for finding the sweetspot on guitar and bass cabs, acoustic guitars, outside of kick drums or any other source where small movements can make a big difference in sound. When teamed up with an X1-R and the multi-device presets in the app, it only becomes even more powerful and finding that elusive tone is a breeze. The V1-R has been a popular choice for professional studios, project studios, FOH engineers and broadcasters.

V1 Single Axis
The V1 has a single axis and offers many tone chasing opportunities in the studio and on stage while being able to handle the rigors of live sound. Great for miking guitar and bass cabs and even snare drums, it is also an incredible tool for adjusting depth for phase alignment outside of a kick drum or any other source. With its ability to save multiple positions as recallable presets a world of new possibilities opens up for FOH engineers. They now have the ability to set different mic placements for different songs with the push of a button. The V1 is a great choice for budget minded studios and FOH engineers who know that moving a mic is far superior to drastic EQ.