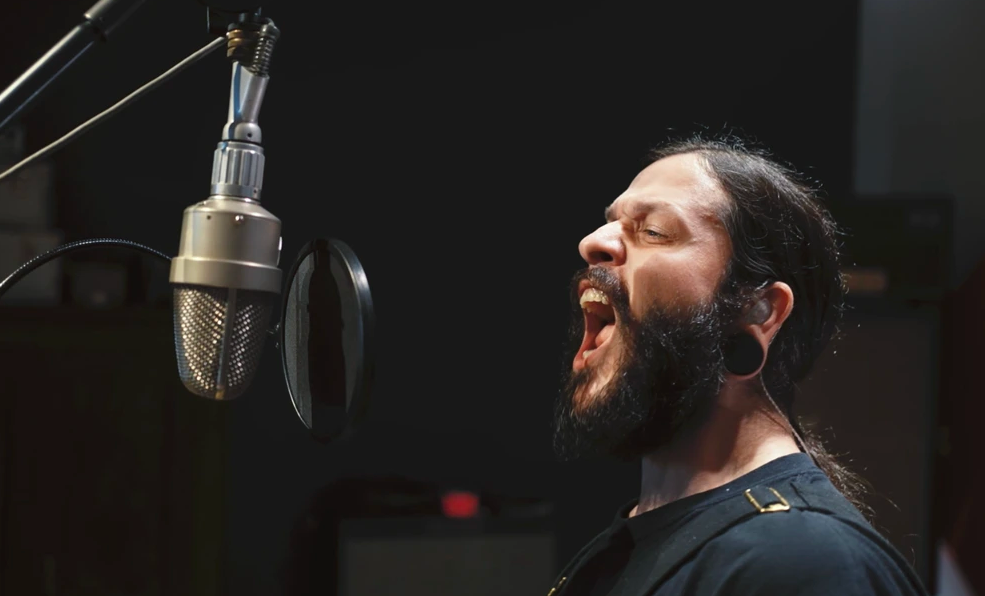 A Must Listen Track. With Jimmy Messer at the Controls, Shawn James Delivers Frenetic Rendition of Ultimate Protest Song, using 24 channels of BAE onto 2″ Tape

Last March, acclaimed indie singer/songwriter and self-described ‘road dog’ Shawn James was tearing it up on small to medium-sized stages across the UK and Europe on a multi-city tour, in support of his 2019 Parts + Labor Records debut The Dark & The Light. Once the pandemic hit, he was forced to cut the tour short and head home, like so many other artists around the world. With the world of live performance literally turned upside down, James came home and started crafting a new batch of recordings, including “War”: the classic protest song made famous by The Temptations and Edwin Starr in 1970.

James recalls the moment the pandemic forced him to stop touring, but how it helped him ultimately begin to dial in his new material: “It was terrible not just for me, but the entire industry,” he says. “Towards the end of 2020, I started to try to be creative again and that’s when I wrote the bulk of my latest material.” A new forthcoming album, scheduled to be released in the fall, is something of a departure from his last album The Dark & The Light — which was built around sparse, acoustic-based instrumentation.

“War”, the first single from the forthcoming album, releases today. It takes all the fire and passion present in the original Edwin Starr version, while adding thundering bass and drums, hard-driving, up-tempo guitars and an awe-inspiring centerpiece vocal track courtesy of Mr. James, who growls his way through the through the song in a heartfelt, dizzying, distorted baritone — all captured by a Neumann M49 running through a BAE Audio 1084 onto 2″ tape.

“We used 24 BAE Audio modules and went straight to a Studer A 800 tape machine, which I think has a lot to do with the quality of this record,” effuses Messer. “Having BAE preamp/EQs direct to tape and Shawn James’ voice it became an amazing combination and I am still taken aback about how great this record sounds.” The entire recording was sent through their custom Neve 40 channel console, which is loaded with BAE 1084s, as well as 1028s, 1073s and 1066s. Jimmy Messer says the BAE 1084s are his favorites: “The 1084 has a high and lowpass filter, so when you are cutting vocals, you can cut out the noise floor,” he explains. “Also using the 1084s, you are able to add the extra Q above 10 kHz, which is nice as well.” “I love the BAE 1073s, but the 1084 is a 1073 with even more options,” he says. “We get multiple choices when EQ-ing the high-end, since we are also getting to choose 12 kHz, 16 kHz. Also, with the filter you can also roll off the top if needed.”

“War” was a song that James had on his mind for a long time, and with the Israeli-Palestinian conflict looming in recent news cycles, he felt it a new version was apropos: “I’ve always loved that song and I am a really big fan of boisterous, huge vocalists who know how to lean into singing and really give it their all,” he says. “And the Edwin Starr version is amazing; he does a fantastic job on the delivery and the wildness of his vocal.” He brought the idea to his producer and CEO of Parts + Labor, Jimmy Messer, who acquiesced to the idea. “We got into it, started jamming and it was just fire right out of the gate,” Messer recalls. “It gave Shawn an opportunity to growl and scream. He just has this intense, heavy distortion that he can call on at will, and the whole song came alive very quickly.”

Messer made the decision that the new songs, including “War”, would be best served by recording through the BAEs live to tape on their newly acquired Studer A800 MKIII 24-track 2″ tape machine. “Shawn is a great performer and wants the songs to be alive and to move. Fortunately, he trusted me enough to go down that path,” he says. “We brought in Charlie Paxton, a great drummer I have been working with for 20 years, I was playing bass and Shawn was playing guitar and singing. We kept digging just hit record. We knew then and there that we had what we wanted.”

Ultimately, Shawn James knew that “War” was going to stand or fall on the vocal delivery. “We had built the track already and I knew I had to execute on the lead vocal,” he says. “The vocal is something I am really proud of, and I think people are going to really dig. On “War”, I am distorting my vocals the whole time, screaming, really going for it. It was a good time.”

As production continued on “War”, Messer added some key arrangements to the mix: “Jimmy just comes up with a lot of cool layering aspects; there are some synths in there that enhance the bass, and the way Jimmy adds these elements in, it’s almost as if you don’t hear it. But it brings a depth to the song that wasn’t there before,” James says. Messer doesn’t diminish the favorable impact of his decision to record to tape: “It had a positive effect on everyone’s performance,” he says. “It brought a reverence to each take, knowing we are going for keeps on this. The intention of getting it right in the moment was really cool. Then to hit play and listen back — it just sounded like a record.”

For Messer, recording to tape brought out the best performance from all concerned, since there was the overwhelming drive to create lasting art ‘in the moment’. From a technical perspective, his BAE 1084s were rock solid and delivered when it mattered most, says Messer: “These BAE modules just don’t’ disappoint and I’m never feeling like I need anything else. I love them.”

“War” will be available for download on multiple formats as of July 2nd on the Parts + Labor website.