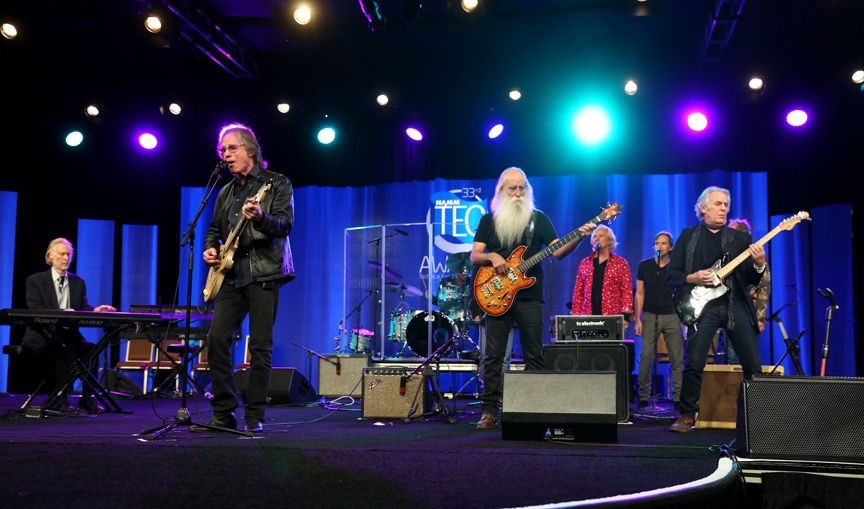 This was the best TEC Awards I’ve been to and I’ve been to quite a few. The production was top notch, and comedian Demetri Martin was a funny and thoughtful host. To cap the evening, Jackson Browne performed “Running On Empty” with Lee Sklar on bass along with other members of his original studio and touring band.

Many additional awards were given in variety of categories that ranged from Studio Design Project to Wireless Technology and also included honors to JBL for their Intonato and AKG for their C636, in the categories of Amplification Hardware/Studio & Sound Reinforcement and Microphones respectively.

One night before ‘music’s biggest night,’ voters chose The 59th Annual GRAMMY® Awards for best Remote Production/Recording or Broadcast in the Outstanding Creative Achievement category. Before Bruno Mars heads to the The 60th Annual GRAMMY Awards, where he’s also nominated, several of his projects won the night in the creative category for Record Production/Album, Record Production/Single or Track and Tour Sound Production, all for “24K Magic.”

Jackson Browne, one of music’s most iconic artists and executives, received the evening’s highest honor, the Les Paul Innovation Award, which is presented annually to remarkably-distinguished and accomplished individuals from the music industry. Michael Braunstein, President of the Les Paul Foundation, introduced Jackson before he hit the stage with the evening’s NAMM TEC Hall of Fame inductees, The Section, for a finale that included Jackson’s signature “Running on Empty” single.

Jackson remarked, “Thank you for this incredible honor. It means so much to be honored by you because I’ve relied on the kindness of engineers and their knowledge in the studio and equipment my whole life. These people know everything I don’t know but they put their technical expertise at the service of the music – at the service of the song. I am indebted to them and I’m indebted to you all who make the gear.”

The NAMM TEC Awards were held during The NAMM Show, the global crossroads of the music products, pro audio and sound, and event technology industries, January 25-28.

In total, winners in the 31 categories were selected from 182 nominees. Title sponsors for the show included Harman (a Samsung Company), The Les Paul Foundation and D’Angelico New York. A full list of sponsors can be found here. Many of the evening’s winning products and technologies are available at music and pro audio retailers worldwide both online and in stores.

Rogue One: A Star Wars Story