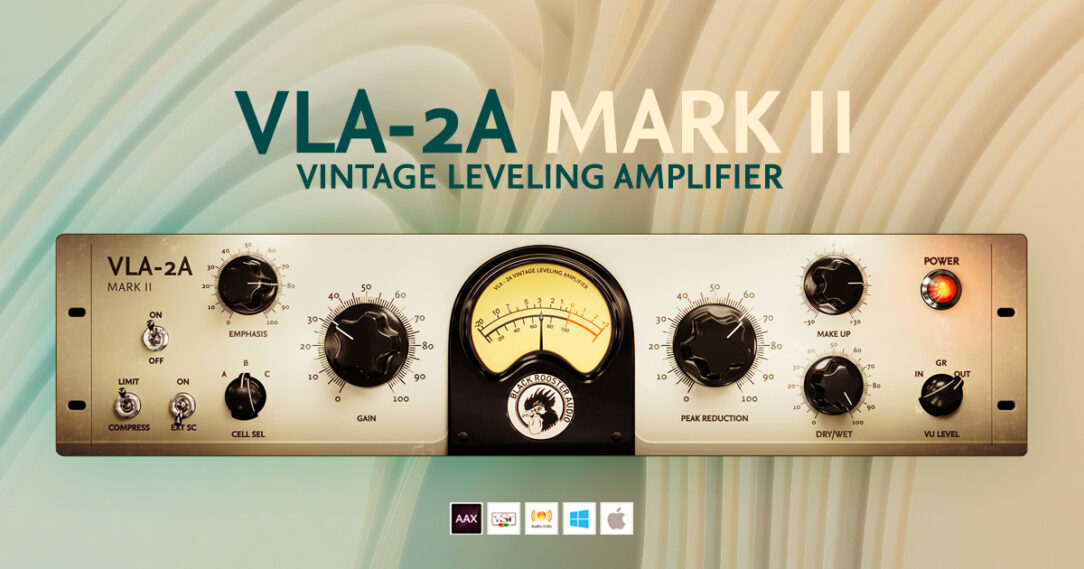 Faithfully modeled on the sonic characteristics of the LA-2A, the VLA-2A adds control features to enhance it’s use in music production

Black Rooster Audio is proud to introduce its VLA-2A Mark II Vintage Leveling Amplifier — advancing its best-selling plug-in as a new and improved version of the world’s finest emulation of an acclaimed late-Sixties-vintage opto compressor that continues to make its musical mark to this day, duly capturing the beauty of opto electronics by bringing warm, breathy compression and tube saturation to (DAW) tracks and adding that unmistakable vintage flair with all the features that owners of the original VLA-2A have clearly come to know and love, but benefitting from a larger GUI and added EXT SC (sidechain), EMPHASIS, CELL SEL (selector), MAKE UP gain, and DRY/WET mix controls — as of March 15…

Stepping, briefly, back in time, the hardware precursor to Black Rooster Audio’s VLA-2A vintage compressor plug-in dates back to the late Sixties when used initially in broadcasting before enterprising engineers noticed that its tubes, multi-stage release, and frequency-dependent attack and response worked equally well when applied to music production. Put it this way: while the VLA-2A was faithfully modeled on the original unit that continues to make its musical mark to this day, duly capturing all of its character to make it an instant favorite in the present-day DAW-driven music-making world, its VLA-2A Mark II Vintage Leveling Amplifier successor succeeds in also transporting its users back in time to take advantage of that vintage vibe but as an even more contemporary take on that theme — thanks to careful refinement and added features making what was already Black Rooster Audio’s best-selling plug-in even better than before.

Black Rooster Audio’s real-time SPICE component-based circuit simulation approach allows its VLA-2A Mark II Vintage Leveling Amplifier plug-in to authentically capture the sound and feel of the original analog hardware unit with all of its nuances. Needless to say, every essential part of the acclaimed late-Sixties-vintage opto compressor concerned — including its input and output transformers, sidechain and audio path tube stages, emphasis filter network, and the T4A cell — have been faithfully modeled from an original Sixties-vintage reference unit.

Ultimately, though, the VLA-2A Mark II Vintage Leveling Amplifier advances its best-selling plug-in predecessor by bringing several flexibility-improving features to the production table: the EXT SC switch allows users to control the gain reduction of the main signal via the envelope of the external sidechain signal; EMPHASIS controls the sidechain pre-emphasis — useful for keeping high frequencies in check, preventing over-modulation, and allowing for a higher sensitivity to higher frequencies; CELL SEL switches between a choice of three different opto-electric cells — A, B, and C, each one offering different attack and release times; MAKE UP gain trims the signal output for optimization; and DRY/WET mixes the compressed signal with the original one to maximize control over the resultant sound.

Saying that, taking a trip under the hood reveals that there is more to the new and improved VLA-2A Mark II Vintage Leveling Amplifier plug-in than might first meet the eye (and ear) — even though all Black Rooster Audio plug-ins support high pixel density on Mac OS X and Windows to facilitate the most enjoyable user experience on high DPI (Dots Per Inch) displays. DSP (Digital Signal Processing) operations are pipelined using the SSE2 instruction set to ensure the highest possible performance despite the very complex computations involved. Aliasing artifacts are efficiently attenuated using a low-latency linear phase Dolph-Chebyshev Window poly-phase design — oversampling is auto-adjusted to any session’s sample rate to save valuable CPU (Central Processing Unit) power while offering the most transparent sound possible, in other words.

With all that in mind, then, the new and improved VLA-2A Mark II Vintage Leveling Amplifier plug-in is a Black Rooster Audio classic that truly represents a vintage classic with a twist — taking in several flexibility-improving features, in fact!

VLA-2A Mark II is available to purchase for a time-limited introductory promo price of only $59.00 USD — rising thereafter to its regular price of $129.00 USD — as 64-bit AAX-, AU-, and VST-compatible plug-ins for Max OS X (10.9 or later — macOS 11.x not yet supported) and AAX- and VST-compatible plug-ins for Windows (7 or later) directly from Black Rooster Audio via its dedicated webpage, which also includes in-depth information, including must-see (and hear) video-supplemented sound samples, here: https://blackroosteraudio.com/en/landing/vla-2a-mark-ii (VLA-2A Mark II is free for owners of the original VLA-2A plug-in.)