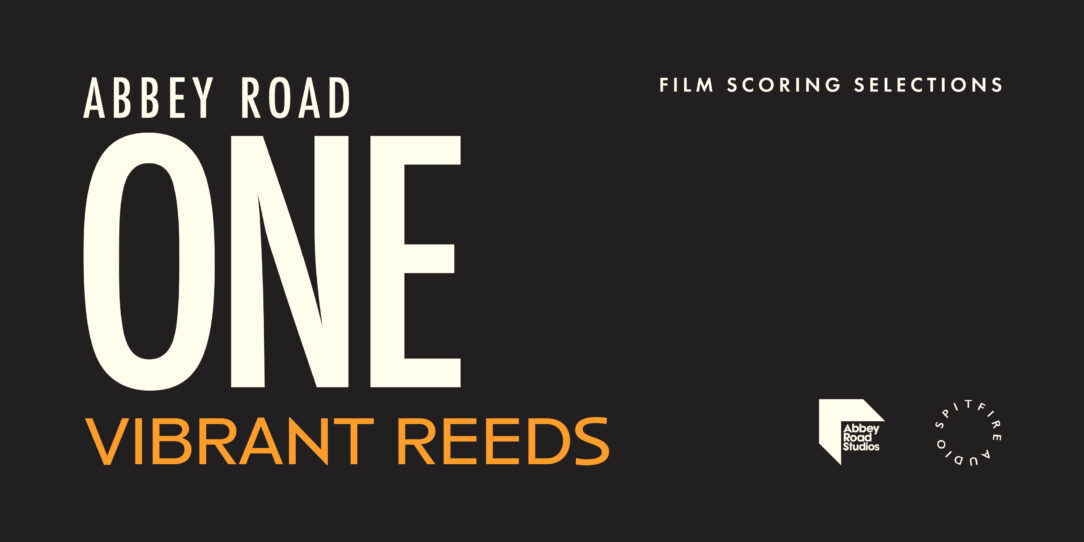 Spitfire Audio, in creative partnership with world-famous Abbey Road Studios, is proud to announce availability of ABBEY ROAD ONE: VIBRANT REEDS — representing the latest addition to its ever-expanding orchestral range of subsequently-released smaller standalone sample libraries. Carefully captured at Abbey Road Studios, Vibrant Reeds offers a dazzling ensemble of oboes and clarinets, performed in octaves, alongside an evocative pairing of oboes and cor anglais as classic cinematic pairings heard on countless scores, perfectly presented as pre-orchestrated patches for immediate creative control and stunning realism housed in Spitfire Audio’s award-winning AU-, AAX-, NKS-, VST2-, and VST-compatible plug-in that loads into all major DAWs (Digital Audio Workstations) without the need for any additional software — as of October 14.

Thanks to its carefully chosen selection of essential and unique techniques, such as shining longs, playful staccatos, intriguing mordents, and Spitfire Audio’s newly- developed, easy-to-use legatos patches providing everything needed to create scores ready for the big screen, who better, then, to formally introduce ABBEY ROAD ONE: VIBRANT REEDS in all its cinematic-sounding musical glory than the sound-specialising British music technology company’s co-founder Paul Thomson, himself no stranger to the wonderful world of film scoring as an English composer for film, television, and video games — and also music technologist to boot. “This one focuses on oboes and clarinets in octaves, and then there’s also a few patches with a cor anglais included as well for an extra kind of vibrancy. As ever, they focus on doing specific things incredibly well.”

With its latest ABBEY ROAD ONE: VIBRANT REEDS release, Spitfire Audio beautifully captures expressive performances of two oboes and two clarinets as a pure and pristine sound orchestrated in the traditional octave spacing, along with an additional pairing of two oboes with cor anglais for a truly evocative sound heard in Hollywood film scores such as American composer, conductor, pianist, and trombonist John Williams’ E.T. the Extra-Terrestrial (1982), fellow American composer and conductor Jerry Goldsmith’s Total Recall (1990), and throughout the Harry Potter film series (2001-2011). As a commonly heard orchestral blend of woodwinds, ABBEY ROAD ONE: VIBRANT REEDS includes an array of techniques, including legato, long, staccatos, as well as major and minor mordents, to allow for focusing on writing expressive themes and melodies while quickly creating an instantly recognisable, high-quality cinematic sound.

Saying that, realism abounds as any ABBEY ROAD ONE: VIBRANT REEDS user effectively enters the room that most composers can only dream of — namely, Abbey Road Studios’ Studio One. Of course, Studio One is considered to be one of the finest acoustical spaces in the world, with its history having an indelible connection with the scores recorded there, embedding emotion, mood, and magic into many of the most renowned films ever made. Musical matches made in heaven, classics such as Star Wars, Lord of the Rings, Harry Potter, and Avengers: Endgame were all recorded in Studio One. Thanks to its rich tonality and famed reverb, Studio One’s sound is widescreen and epic — truly the iconic sound of cinema.

Continues Paul Thomson: “The first [LEGATO (8ve)] legato gives you a relatively solid sound — quite a pure, clean sound, yet you’ve still got that fantastic dynamic range with that added kind of spiciness and piquancy when adding in the cor anglais to the mix. This is a sound that’s incredibly familiar — something that you find very commonly in Hollywood film scores, so it’s something that’s very useful — the second most used orchestral blend in the woodwinds, after the traditional flutes with a piccolo an octave up. Looking at the individual patches within this library, we’ve got the longs [LONG (8ve)] that are based on just the oboes and clarinets, which you can use for that kind of gentle, soft, and very pure sound, but it can also get quite solid and quite punchy, and if we look at the corresponding long, which we’ve called VIBRANT LONG [(8ve)], which is the version with the cor anglais in the mix, you hear that extra colour come in — a fabulous, rich sound. We’ve also got fantastic staccatos [STACCATO (8VE)] built with the same ensembles. In addition to those, and matching up to the mordents we have in the earlier library, we have these fabulous mordents with a minor [MORDENT MIN 2ND (8ve)] and major 2nd [MORDENT MAJ 2ND (8ve)] and a minor [MORDENT MIN 3RD (8ve)] and major 3rd [MORDENT MAJ 3RD (8ve)]— mordent being also known as a ‘shake’, which is, again, very familiar, and really great to use as a kind of standalone thing, or you can use it as part of a phrase.”

But equally attractive is the fact that ABBEY ROAD ONE: VIBRANT REEDS — and, indeed, all of its ABBEY ROAD ONE: FILM SCORING SELECTIONS series siblings — puts the same first-call musicians that play on globally successful movies at anyone’s fingertips, all recorded by multi-GRAMMY® Award-winning engineer Simon Rhodes (Avatar, Harry Potter, Hugo) and featuring Abbey Road Studios’ coveted collection of microphones and outboard gear. Get this, though: ABBEY ROAD ONE: VIBRANT REEDS is actually a fully-fledged standalone library in its own right, recorded the same way that its users’ favourite film composers would: with the unmistakable acoustics of Abbey Road Studios’ Studio One, exceptional players, award-winning sound engineers, and priceless microphones, albeit all allowing them to quickly and easily create film scores, saving time layering and trying to mix, thanks to stunning options of microphone positioning and mixes that are consistent across all of Spitfire Audio’s ABBEY ROAD ONE: FILM SCORING SELECTIONS series — and all without leaving their computer comfort zone.

Alongside ABBEY ROAD ONE: VIBRANT REEDS, Spitfire Audio is also proud to announce availability of ABBEY ROAD ONE: THE COLLECTION, comprising all six ABBEY ROAD ONE: FILM SCORING SELECTIONS series sample libraries to date, including the aforesaid ABBEY ROAD ONE: ORCHESTRAL FOUNDATIONS that successfully cemented Spitfire Audio’s continuing creative partnership with the world-famous Abbey Road Studios late last year, to thereby allow anyone access to the classic sounds of cinema — and all at an attractive price to boot. “All of these sounds really lock together absolutely perfectly and give you the sound of Studio One in Abbey Road, which, again, is such a familiar sound from film scoring.” So says the justifiably proud Paul Thomson, perfectly ending on a high note himself.