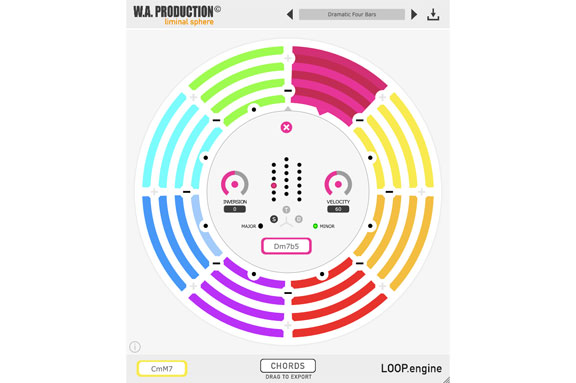 W.A. Production conjures chords of all shapes and sizes at a couple of clicks with convenient CHORDS MIDI effect plug-in par excellence

W.A. Production, producers of high-end professional-sounding samples, instrument and effect plug-ins, DAW (Digital Audio Workstation) templates, and more, is proud to announce availability of CHORDS — conveniently conjuring up chords of all shapes and sizes at a couple of clicks as a must-have MIDI effect plug-in originally designed for EDM (Electronic Dance Music) productions, but beneficial in any musical situation or genre needing an inspirational and creative kick-start — as of January 22…

With writer’s block stubbornly setting up a musical road block beyond which it is tough to stop staring at a blank project page idling in a DAW, inspiration and creativity can sometimes seem to have run dry. It is for this reason that W.A. Production has created CHORDS, conveniently conjuring up chords of all shapes and sizes at a couple of clicks as a must-have MIDI effect plug-in originally designed for EDM productions, but beneficial in any musical situation or genre needing an inspirational and creative kick-start. Thanks to its intuitive interface, it is easy to try out new ideas for tracks as the must-have MIDI effect plug-in in question quickly takes the strain — suggesting single four-note chords to creating complete eight-chords riffs and much more besides — so users will soon be speeding along with a fresh hit of inspiration and creativity, their musical destination in plain sight.

Simply load the CHORDS MIDI effect plug-in in front of any MIDI-triggered audio-generating plug-in in a DAW, hit play and musically marvel at how the W.A. Production’s state-of-the-art software genius generates looped options for up to eight chords with full control over chord shape, INVERSION, VELOCITY, and more. It is then just a case of dragging the MIDI straight from the plug-in to the DAW project and letting creativity flow freely as CHORDS gently guides its users toward their musical destination with sensible suggestions.

Going global or granular, all is perfectly possible when working with CHORDS — global controls adjust inversions, length, speed, and root key of the entire playback, permitting users to make on-the-fly adjustments to their entire riff as a simple as possible process, while clicking on a coloured segment allows for more granular control over chord shapes, including MAJOR and MINOR variations, as well as individual INVERSION and VELOCITY.

Simple segments number up to eight, each containing a different chord type and allowing users to choose to trigger between one and four notes per chord. Choice notwithstanding, playback of all such segments sync to the host BPM of the DAW, duly remaining locked in time at all times. That said, users can easily add and subtract segments at any time, as well as independently changing a range of parameters for each segment.

Segments can be programmed with inversions from -6 to +6, transforming chord shapes and placing the root note inside the chord itself. Easily experiment by pushing the lowest notes up an octave or the highest notes down an octave to turn chords inside out!

Once chords are loaded and a segment chosen, there are 18 small black buttons in the centre of the interface with which users can choose S (Subdominant), T (Tonic), or D (Dominant) chord shapes — simple triads right through to more complex shapes, let CHORDS find the right notes for any related chord. Clearly, CHORDS users wishing to make use of an awkward G7sus4 or Bm7b5, say, can do just that — and all without worrying about the complicated chord shapes concerned.

CHORDS also makes it easy to get chord progressions into projects by simply dragging and dropping them from the plug-in itself into the DAW. It is just a case of editing thereafter to anyone’s heart’s content, chopping up the MIDI, and transposing and twisting CHORDS’ suggestions to suit the style of music being worked on.CHORDS comes complete with a large library of factory preset progressions, helpfully labelled in detail. All act as useful musical motifs to get users up and running in next to no time, and all of which can ultimately form the basis for whole tracks. No need for EDM producers — or anyone else, for that matter — to stay stuck with writer’s block, but rather speed along with constantly fresh hits of inspiration and creativity, their musical destination always in plain sight.

14-day, fully-functional trial versions of all W.A. Production plug-ins — including CHORDS — are available by signing up for an account for free here: https://www.waproduction.com/users/login
Watch W.A. Production’s informative introductory video for CHORDS here: https://youtu.be/7LefJUtoGo4