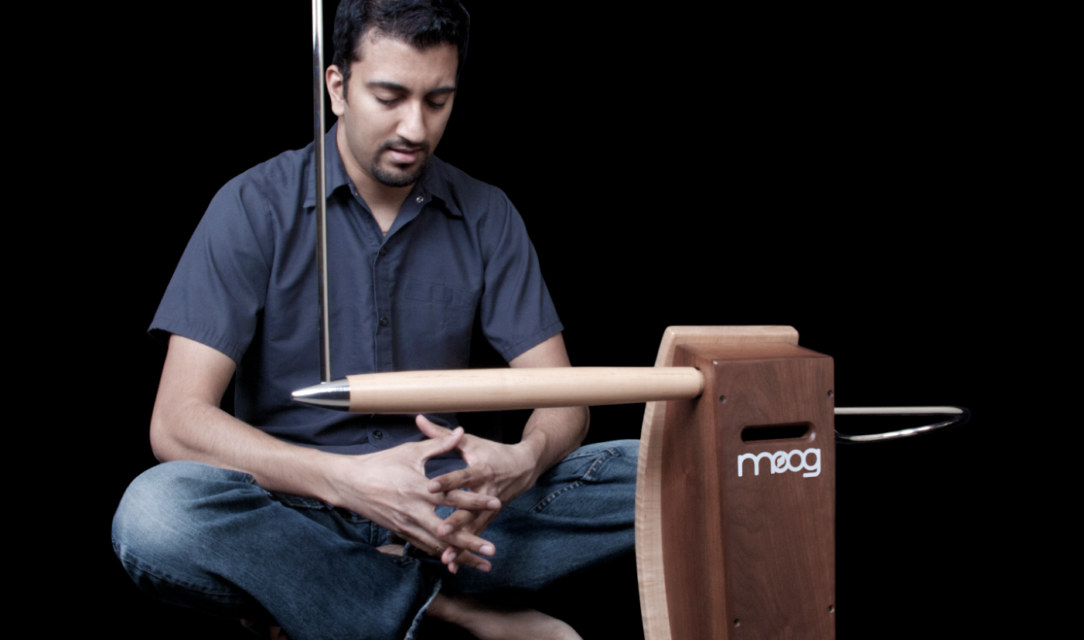 The Bob Moog Foundation proudly announces that virtuoso thereminist Randy George will be performing live from the Foundation’s Facebook page on Bob Moog’s birthday, Saturday, May 23rd, at 8pm (ET)/5pm (PT). He will be performing with his unique setup, which includes a Moog Etherwave Pro theremin, a Haken ContinuuMini, and a collection of wireless peripheral devices of his own design. The performance is part of Moogmentum In Place, a series of live streaming events created to celebrate Moog’s birthday and the anniversary of the Moogseum.

“My father’s deepest musical and technical inspiration was the theremin,” reflected Michelle Moog-Koussa, Executive Director of the Bob Moog Foundation. “He began making theremins when he was just 15 years old, and he continued to create over 15 different models over a 50+ year period. That instrument eventually led to his invention of the Moog synthesizer. It is ultimately fitting that Randy George will offer the musical gift of a theremin performance on my father’s birthday, and that he will do it in a way that integrates a highly innovative, inventive spirit, reminiscent of the spirit that my father brought to his work. Randy’s concert is an ode to Bob Moog, and to the great Leon Theremin himself.”

Randy George is one of a small handful of artists dedicated to theremin performance. His work has advanced awareness of the rare craft through roles as soloist, session musician, lecturer, and video creator. Since 2006, his music videos on YouTube featuring the theremin have been viewed over 21 million times. He has collaborated with artists and groups including Danny Elfman, John Massari, Bleeding Fingers Music, Hollywood Symphony, Santa Monica Symphony, Valencia Symphony, Gaudete Brass, and Moon Honey, and has performed and lectured at SUNY Fredonia, Georgia CSU, Chapman University, and Polytechnic University of Valencia.

“I regard Bob Moog as the most influential person I never met,” noted Randy George. “Since discovering the theremin only one year after he passed, Bob’s work and legacy has always been a powerful guiding inspiration for me. The instrument I perform on today, the Moog Etherwave Pro, was his final theremin design, and unquestionably the product of a lifetime of dedication to a rare art. It’s incredibly humbling to know that every melody I play is only possible because this great man wanted to share the joy of performing space controlled music. What an amazing gift!”

“I’m thrilled to contribute energy to Moogmentum in Place in celebration of Bob’s birthday and streaming in support of the Moogseum during this challenging time,” he adds. “His legacy has touched a lot of people in the music industry, but it has also altered the course of life for many of us who share his passion for the theremin. I’m here to help keep the flame burning.”

Moogmentum in Place is a series of fundraising live stream events, from May 9th- May 31st, celebrating Bob Moog’s 86th birthday and the one year anniversary of the Moogseum.

Moogmentum In Place features performances, musical and technical insights, and question and answer sessions with a prodigious and varied group of legendary musicians, composers, and music technologists. All events are streamed from the Foundation’s Facebook page where attendees from around the world have the opportunity to donate in any amount.