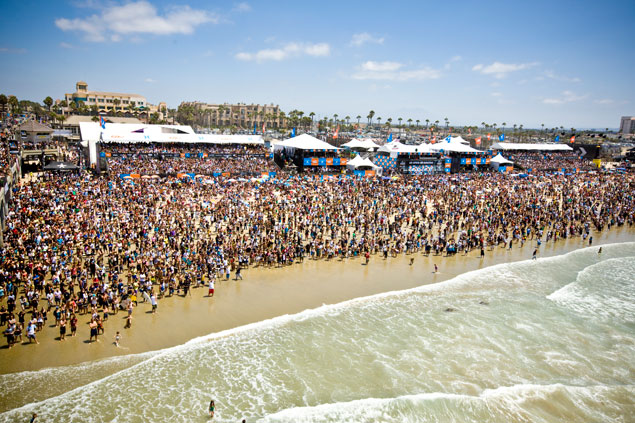 US Open of Surfing Free Concerts in Huntington Beach

The largest beach party in the world kicks off on July 30 and runs through August 7, 2011. Last year the concerts were a huge success. The featured acts for the 2010 US Open of Surfing were; Iration, Bedouin Soundclash, Timmy Curran, Hot Hot Heat, Cobra Starship, Switchfoot and headliner on the final day was Weezer. By the last concert on Saturday the beach was wall to wall people on a hot sandy day with no where to escape but the ocean. This year 500,000 people are expected for the week of the event, so get ready for massive gridlock in Huntington Beach.

Huntington Beach, CA – The 2011 Nike US Open of Surfing has a soundtrack and it will play live on the beach before tens of thousands of fans. The event, owned and produced by IMG, the global leader in sports and entertainment, is taking a cue from its action sports roots, and set to deliver the largest free concert series of the summer.

This year’s musical line-up is a representation of today’s youth culture featuring headlining sets by pysch-pop rockers MGMT and platinum-selling rockers Jimmy Eat World.The series will also include sets by the most buzzed about names emerging on the music scene this year: Surfer Blood, Dead Country and The Sounds. “We’re pretty excited to come to Huntington Beach for the US Open of Surfing. Our advice to everyone: Drop out with MGMT, drop by for MGMT, but just don’t drop in on MGMT,” said MGMT’s Andrew VanWyngarden.