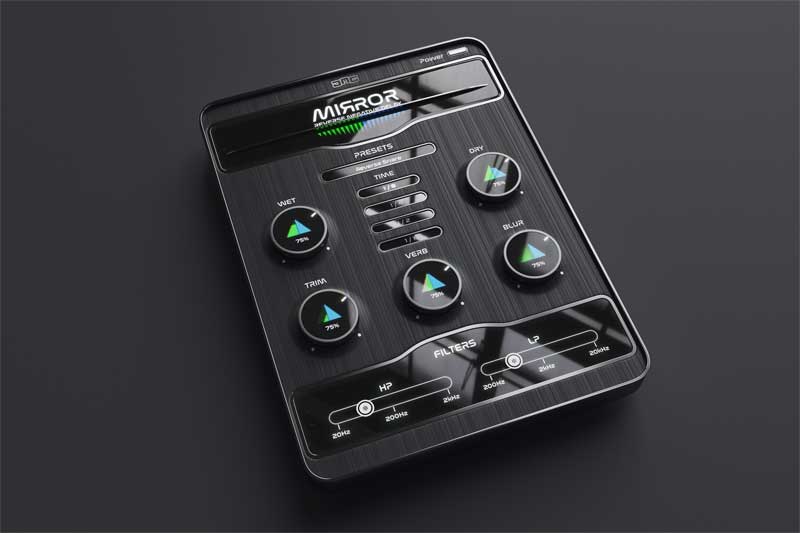 Paradoxically capable of applying effects, reversing audio, and playing it back before the event even begins by reporting a ‘fake’ latency to the host DAW, which then compensates, perfectly aligning the end of the effect with the start of the original sound

Imagine, if possible, owning a plug-in that effectively sees the future, one which is capable of applying effects, reversing audio, and playing it back before the event even begins! Best of all, that imaginary plug-in could create the much-loved reverse reverb effect on snare drums automatically in a matter of seconds, so users could comfortably concentrate on the sound itself, instead of laboriously labouring over the production process. Put it this way: the timely arrival of JMG Sound’s Mirror literally leaves nothing to the imagination, instead making way for reality.

Readily (re)creating that classic reversed snare sound of the past — popularised to the present by purveyors of EDM (Electronic Dance Music) and also evident throughout the likes of ‘Panic Station’ by English alt rockers Muse (released in 2013 as the fifth single from their sixth studio album The 2nd Law), while Led Zeppelin guitarist and producer Jimmy Page even went as far as claiming that he had invented the reverse reverb effect back in 1967 — contemporarily comes naturally to Mirror. No need to become a prisoner of the past now, though, thanks to Mirror making it perfectly possible to achieve that reversed snare sound instantly — and all without the hassle of having to set it up manually for each hit heard throughout the track being worked on.

On the face of it, then, Mirror is not just for working with snares. Indeed, it can sound amazing on a wide variety of sounds, such as injecting interesting rhythms to tedious drum loops, spicing up arpeggios and leads, or transforming vocals and pads into otherworldly textures. The limit lies only in the imagination of the user. Use it to transition into new elements in a song or add ethereal effects and ambiences to tracks.

Though it is not necessary to know how Mirror works when using it to create classic reversed snare sounds or other reversed reverb effects, it is interesting to read about anyway. As a reverse negative delay plug-in, Mirror records the audio played into a buffer and then plays it back in reverse, yet it plays this reversed audio back before the original audio plays, however. How, exactly, does it do this? Though it is easier said than done, in reality — reporting a ‘fake’ latency to the host DAW, which then compensates, allowing enough time for the buffer to fill and the audio to be reversed, perfectly aligning the end of the effect with the start of the original sound — it surely sounds simple enough when written about.

Simpler still, several straightforward controls are clearly visible via the plug-in’s photorealistic yet flexible GUI (Graphical User Interface), itself imbuing its users with a feeling that they are touching real-world hardware; however, it easily adapts to their needs since they can always drag the arrow at the bottom-right corner to change its size — smaller to save precious ‘screen estate’ or larger to make it easier on the eye and, as a result, even easier to use: WET — controls the level of the added signal; DRY — controls the level of the original signal; TRIM — controls how much of the end of the reversed audio will be trimmed off (in milliseconds); VERB — controls the dry/wet mix of the reversed reverb (applied to the audio before the reversing, so the result is a reversed reverb sound); and BLUR — controls the dry/wet mix of a short reverb (diffusing the audio, so suited to softening any transients that might be too dynamic for the reversed effect). Furthermore, FILTERS are also available in HP and LP flavours — former controlling the frequency of a high-pass filter applied to the reversed audio (ranging from 20Hz to 2kHz), latter controlling the frequency of a low-pass filter applied to the reversed audio (ranging from 200Hz to 20kHz). All are easy to use, and allow Mirror users to soften, trim, filter, extend the reverse effect to seamlessly transition from wet to dry, duly smooth out transients, remove bass punch, reduce harsh attacks, or lower high-end frequencies; all work to make the effect act as a supporting role while the original sound stays centre stage, which is the way it should be.

But while it is well worth mentioning here on the home straight that the Mirror plug-in provides maximum audio quality by using internal 64-bit audio processing as well as being able to handle any sampling rate — as, indeed, is the case with all plug-ins released under the United Plugins umbrella, so why not try it at 192 kHz (or even higher) — and also the fact that it intelligently detects whether it makes sense to perform any processing at all — if not, it temporarily turns on sleep mode, meaning it requires virtually no CPU (Central Processing Unit) power at all, thereby saving computing resources for other processes — what it really comes down to is this: musically making the reversed reverb effects of anyone’s imagination quickly and easily come to life in today’s DAW-driven recording world — an already amazing world which would, without doubt, have been unimaginable to the likes of Jimmy Page back in 1967 — without laboriously labouring over the production process is truly a dream come true, thanks to independent development teams federation United Plugins and founding partner JMG Sound working together in perfect harmony to make Mirror a reality well worth working with in today’s DAW-driven recording world.

JMG Sound’s Mirror is available to purchase for a time-limited introductory promo price of only €22.00 EUR until February 28, 2022 — rising thereafter to its regular price of €69.00 EUR — as an AAX-, AU-, VST-, and VST3-compatible plug-in (using internal 64-bit audio processing capable of handling any sample rate) directly from United Plugins here: https://unitedplugins.com/Mirror/ (A 15-day, fully-functional trial version for macOS 10.10 and newer and Windows 8/10 can be downloaded for free from here: https://unitedplugins.com/download/)

Note that no iLok, dongle, or internet access is required for Mirror activation. (All United Plugins software uses license files for activation and owners can freely use purchased software on all their computers as long as they are the user.)