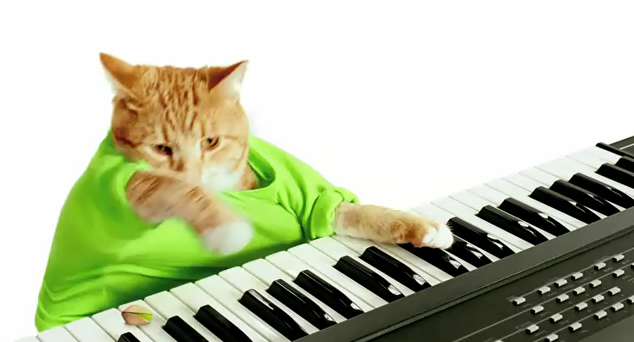 The History of Keyboard Cat

On its own, the Keyboard Cat video might elicit a smile and a chuckle. But when the adorable feline pounding its paws on a musical keyboard is preceded by an awkward, pain-inducing video of someone falling down an escalator or screaming at his parents, you have the latest Internet meme.

Charlie Schmidt filmed the original Keyboard Cat two decades ago — when keyboards pervaded practically every facet of pop music, he told CNN. Schmidt posted the video to YouTube almost two years ago, where it has since been viewed 325,000 times — moderate in popularity by YouTube standards.

It wasn’t until Brad O’Farrell, a 22-year-old from New York City, grafted an abbreviated version of the cat video onto the end of a distressing clip of a person in a wheelchair tumbling down an escalator that the meme really began to catch on.

The meme got its start in February, when O’Farrell saw the potential in Keyboard Cat, and asked Schmidt for permission to use the clip. O’Farrell did a quick mashup and slapped ads on his video, called “Play him off, keyboard cat.” It has made about $500 — his highest-grossing video, he said in an instant message. The majority of that has been racked up only in the last few weeks. Not bad for a 44-second clip.

Since then, Keyboard Cat has been mashed up more than 200 times, and received an endorsement from Ashton Kutcher, which was broadcast to more than 1 million people via Twitter. In each of these videos, …

… harrowing visuals are eventually offset by the jazzy, winsome feline.

O’Farrell works for MyDamnChannel, an independent video host and producer that also runs their videos on YouTube. Despite some successes on YouTube, including Keyboard Cat, he says he prefers running his videos on other sites that aren’t part of Google’s behemoth portal.

“That’s a terrible analogy,” he wrote.

Using his connections with editors at YouTube, who decide which clips get maximum exposure, O’Farrell’s Keyboard Cat video landed on the site’s home page, he said.

“You can create a joke or a catchphrase, but you have very little control over whether or not it catches on,” O’Farrell wrote. “But I still did intentionally do a lot to try to get it to catch on.”

Keyboard Cat, it seems, could make anything seem funny. As more videos of injuries, domestic disputes and, well, more injuries were getting the Keyboard Cat treatment, the juxtaposition appeared to mesh tragedy and comedy with Shakespearean-like elegance.